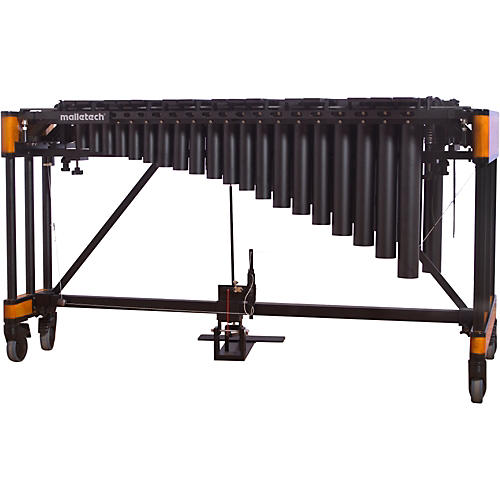 The first and most obvious question to ask is, "Why did Malletech call this instrument the Love Vibe?" This design was very much a labor of love on the part of its creator (see his statement at the end of this listing), but moreover, the Love Vibe offers unprecedented control over the instrument, along with less pedal noise and greater dynamic range than conventional vibraphones.

The Love Vibe is played it just like a "normal" vibraphone (using the first half of the pedal range), but when you push the pedal a bit further, you can control the speed of the vibrato in real time. You can add vibrato (much like a pop singer), link vibrato speed to the underlying tempo, improvise "vibrato rhythms" at will, and control the depth & strength of the effect in real time.

It features fully open to fully closed resonators, no air leakage around pulsar disks (for softest ppp), no blockage of bar vibrations by fans (for maximum fff), no tube cut outs (full frequency spectrum and power of resonance), and crescendo and diminuendo at will.

The Love Vibe is easy for one person to set up quickly and it has no motor, which results in silent vibrato control. Every parameter is user adjustable, and these instruments feature the most beautiful "electric guitar" choice of finishes ever seen on a vibraphone. The resonators are fully tunable. This is the first vibraphone with Malletech's Patented fully tunable resonators for maximum warmth, volume and control of sustain. You won't understand how you ever lived without them.

Designer Statement
"I began the design process for this vibraphone more than 15 years ago. It seemed obvious to me that the noisy, unexpressive, motorized vibrato used on all vibraphones was musically uninspiring. Many vibraphone players even chose to create their music without use of the "vibra" part of the vibraphone, because even the best instruments frequently had motors and pulsar fan assemblies that were too noisy to use. Even on a brand new instrument that was working well, the musical result of a motor-produced vibrato was mechanical sounding and musically unsatisfying to my ears.

When I began to look more closely at vibraphones, I realized that there were an array of other problems that plagued the daily lives of vibes players: dampening systems that were impossible to adjust to musically critical standards (high and low range dampening at different times, or sharps and naturals dampening at different times); poorly engineered frames that flexed, squeaked and rattled under hard playing, or worse, with every push of the pedal (or the more recent "cement truck solutions" to the problem). Most of these frame and dampening problems experienced could not be fixed on a gig, and the basic design made set up and break down unnecessarily difficult and time consuming.

Much gratitude is owed to Roger Clerc and Josef Eberl, the two Swiss engineers who brought my ideas to mathematical and structural perfection, and to the several Malletech employees who also contributed their time, effort and skills to the project. This was no easy thing to conceive or to perfect. If it were simple, other larger, well-funded companies would have solved these problems decades ago. The reaction to a prototype at the 2008 PASIC was more gratifying than we could have hoped for. Based on player input we solved the remaining ergonomic issues with the pedal and we are now proud to present the finished instrument that began shipping in August 2009. All of us who were involved in this project over the past few years hope you love our Love Vibe.

Order soon, and experience the next generation of vibes technologies.