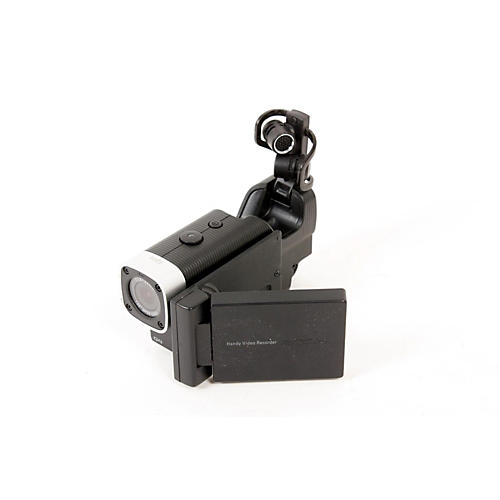 The Zoom Q4 combines high-definition video with high-resolution audio. Compact and lightweight yet full-featured; the Q4 provides everything you need to shoot amazing videos with incredible sound. That means you'll never have to compromise on creativity. The Q4's ultra-compact size and portability make it ideal for conducting video interviews and capturing late-breaking news or documentary footage in the field, and its wide range of compatible mounts makes it easy to shoot from any angle. Use the Q4 to stream your performance, record on the road, or produce a high-quality demo. Capture live concerts, auditions and band rehearsals and use the optional guitar clamp accessory to provide unique points of view. Create detailed video lessons-the Q4 is perfect for showing fingerings, bowings and other playing techniques. Whatever your creative goal, the Q4 can help you achieve it.

HIGH-RESOLUTION AUDIO MEETS HIGH-DEFINITION VIDEO
Zoom products have long been among the gold standard for portable audio. The Q4 redefines the state of the art in portable video. Professional videographers understand that the sound is as important as the scene. It's not enough to capture the sound of the ocean; you have to be able to feel the water bubbling beneath your feet. The Q4 delivers exactly that kind of experience. Its unique blend of high-resolution 24-bit/96k audio with high-definition 1080p video means never having to compromise on quality.

X/Y RECORDING
The Q4's wide angle X/Y microphone incorporates two matched unidirectional elements-mics that are especially sensitive to signal coming from directly in front, and less sensitive to signal coming from behind or from the sides. The convenient placement of the mic enables the supplied the windscreen to be easily attached, allowing you to use the Q4 even on difficult outdoor shoots. In addition, a built-in low-cut filter can be used to reduce low-frequency noise, allowing you to capture great sound both indoors and outdoors.

The X/Y microphone is also designed to capture the natural ambience of a live concert and deliver lifelike sound with sharpness and definition. An optional guitar clamp lets viewers experience firsthand what it's like to be onstage.

EXPANDABILITY
The Q4's mic/line level input and multiple outputs (micro HDMI, mini USB, and line-level/headphone jack, with dedicated volume control) allow you to easily interconnect it with other audio and video equipment for enhanced functionality.
The Q4's LCD and built-in speaker allows instant monitoring of your recordings, but it also offers additional flexibility through its various connectors: a stereo 1/8" Mic/Line In jack, a stereo 1/8" Line In/Headphone jack, a mini-HDMI video output, and a USB port. Make use of a wide range of devices to boost your production capabilities: connect, stream, and share.

CAPTURE SHOTS FROM A BETTER PERSPECTIVE
The Q4's versatile and flexible design challenges video creators to push themselves to the limit. Compatible with both standard tripod and GoPro mounts, the Q4 can go anywhere. Its wide-angle lens and choice of video formats and frame rates allow the Q4 to record sharp, detailed images in any situation, and its full-color LCD-which can be detached during shooting for portability and extended battery life-provides a clear preview of each moment you capture. The Q4 is also able to send digital data to DAWs or video editors such as iMovie, Final Cut Pro, or the included HandyShare software.

The Q4 doesn't just get good footage, it captures experiences. Use it to document the important events in your life such as weddings, anniversaries, and graduations-or use it for creative projects, giving your work the crisp, realistic quality it deserves.

TAKE IT WHEREVER YOU GO
The Q4 can act as a live web camera or USB microphone, making it as useful for reporting breaking news in the field as it is for personal blogs or conducting interviews. Use it handheld or mount it to any standard tripod or GoPro accessory for a wide range of interesting angles.

CHARGE FORWARD
All you need to power the Q4 is the single supplied lithium-ion (Li-Ion) battery, which can be recharged with the use of an optional AC adapter or by connecting the Q4 to your computer via USB. Battery life is approximately three hours when shooting video at 720p/30fps, or two hours when shooting high-definition 1080/30fps video, giving you the freedom to leave the studio behind and explore the world around you.

FLEXIBLE FORMATS
The Q4 records directly to SDXC cards up to 128GB in a variety of video and audio file formats, making it fully adaptable for your needs. The three HD settings provide maximum video quality while the two WVGA options can be used to conserve SD card space. The Q4 supports two audio file formats: WAV, up to 24-bit/96k, for uncompressed full fidelity sound, or AAC to conserve space.