On qualifying purchases made with your Musician's Friend Platinum card through 8/21/2022. Equal payments required for 48 months.

Join For Free
Share your location Order within 7 hrs 48 mins. 12 secs.
In Stock & Ready to Ship Orders placed before 3 p.m. ET usually ship the same business day (except weekends and holidays).
Ship to
Please enter 5 digits
Free Shipping Shipping and Delivery Times If we promise a delivery date and a delivery attempt is not made by this date, we will provide a refund of any shipping fees associated with your order. Questions? Call 800-449-9128
site1skuL74680000000000 true MFI=3 true Change Location 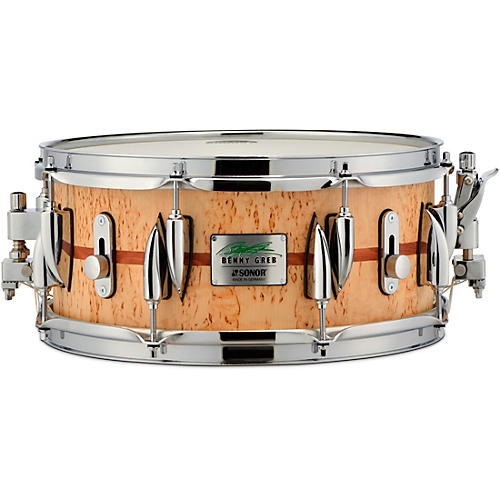 Ten years ago, Benny Grab collaborated with SONOR on what became one of the most popular signature snare drums on the market. Now, the German drum maker has teamed up with Greb again for a re-imagined version. This drum starts with the same essential elements that keep the original in-demand to this day—specifically, the shell. This snare starts with the same idiosyncratic 13 x 5.75” beech shell that has a very wide tuning range and exceptional sensitivity. It also features the recognizable Scandinavian Birch veneer that gave the original its classy, natural look.

The changes in this updated drum start with that same veneer. This new model features a bubinga wood stripe inlay all the way around the outside, making for a total of three high-quality tone woods in one drum. And to replace the original lugs, this new model features offset teardrop lugs to round out a vintage feel. The new lugs feature Tune Safe technology to keep the tuning from drifting. This drum is also outfitted with the superior SONOR Dual Glide snare wire system, which lets the player change out the snare-side head without having to change all their snare wire settings.

But the greatest innovation is a feature Greb designed himself. He calls it the Monorail dampening system, and it gives this drum an unparalleled range of sound possibilities, right out of the box. The monorail system features two internal mufflers, inspired by old-school internal mufflers made famous by jazz drummers of the past. But while those mufflers required the drummer to remove the batter head to adjust them, the Monorail system lets the drummer adjust the mufflers independently with two dials on the outside of the shell. One of the mufflers comes fitted with a soft “sheep” head and the other with a hard “felt” head. Drummers can easily adjust both of these mufflers in seconds, even between or during songs, creating the impression of multiple snare drums in one. Because the mufflers are both variable, with interchangeable pads and separate adjustment mechanisms, the possibilities are nearly endless.

Get a near-endless array of sounds from one signature snare. Order now.