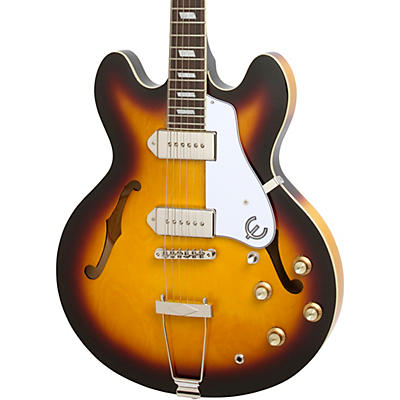 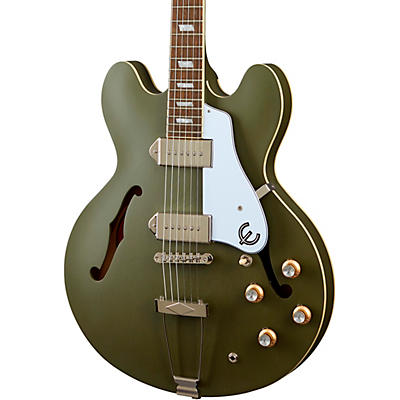 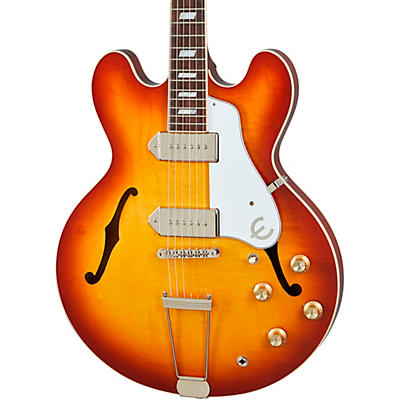 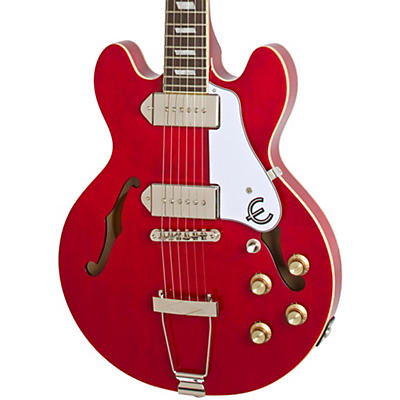 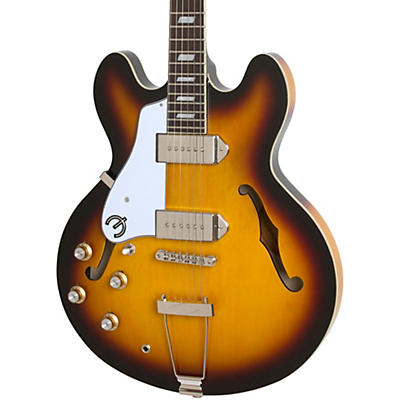 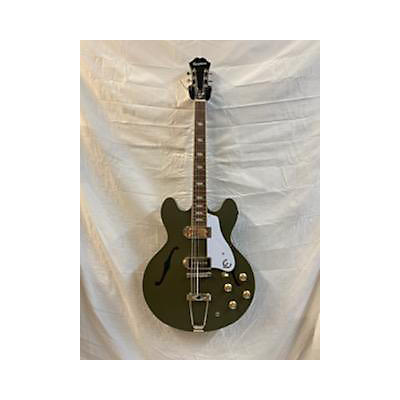 First released in 1961, the Casino is arguably Epiphone's most well-known model. While the thinline Casino (and the nearly identical Gibson ES-330) bear a close resemblance to the Gibson ES-335 model, they have a few major differences that contribute to their significantly different sound. Both guitars have 24.75" scale mahogany necks, and use laminated maple for the tops, sides and backs of their double-bound bodies, but unlike the 335, the Casino is a true hollow body guitar; it lacks the solid block of wood down the center section of the guitar that is installed in the semi-hollow bodied ES-335. This changes the resonance and sustain qualities of the guitar; the Casino is a much louder guitar when played acoustically, but tends to feed back earlier at high volume. The control layout is the same -- two volume and tone controls, plus a three-way pickup selector switch. A Bigsby vibrato is an option on both guitars. While the Casino uses the same Tune-o-matic style bridge as the ES-335 and several other Gibson models, the Casino uses a trapeze tailpiece instead of the 335's "stopbar" tailpiece. The pickups are also different, with bright, snarly single coil P-90 pickups in the Casino, and warmer, fuller sounding humbuckers in the ES-335.
Certainly one of the biggest reasons for the Casino's notoriety stems from their use by The Beatles. Paul McCartney, acting on advice from blues legend John Mayall, purchased his first; some time late in 1964. Within about a year, by the time of the Revolver recording sessions, George Harrison and John Lennon both acquired Casinos of their own. All three saw extensive use on various Beatles recordings, including the lead guitars on Taxman, Ticket To Ride and the main guitar part of Revolution. Lennon in particular became closely associated with the model, and he used the Casino as his primary electric guitar for the remainder of his time with the band, including in the Let It Be film and for the final "rooftop" performance. McCartney still owns and regularly uses his Casino both on tour and in the studio, and even refers to it as his favorite electric guitar, and the one he would chose above all others.
The hollow body design of the Casino makes it more prone to feedback than solid body guitars, so it is not generally considered a good choice for hard rock and metal styles, but the Casino works well for blues, country, Americana, roots-rock and even jazz styles. Today Epiphone offers this guitar in a few versions, including a standard model, Elitist version and an "Inspired By John Lennon" model. Other famous Casino players include Matthew Sweet, Jeff Tweedy (Wilco), Paul Weller (The Jam) and Dave Haywood (Lady Antebellum).