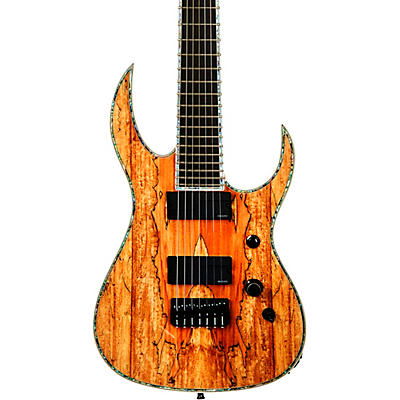 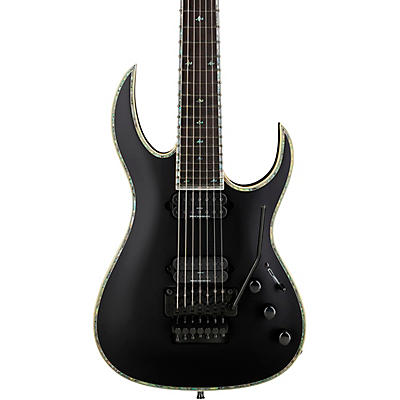 B.C. Rich is a luthier that's well-known today for bringing to market some of the most distinctive guitar bodies anywhere. Though the brand is practically synonymous with rock and metal, founder Bernardo Chavez Rico actually came from a background playing and building acoustic Flamenco guitars. It wasn't until 1969 that he took his first steps into making electric guitars, laying the groundwork for B.C. Rich as we know it today. The shop also helped pioneer the modern 10-string guitar, so it's only natural that they have such a good selection of extended-range electric guitars. Just like any other axe, your choice of extended-range guitar will come down to the shape, size, tonewood and pickups you prefer. You'll also have your choice between 7 and 8 strings for models like the Villain Escape. These guitars feature basswood bodies and maple necks, using B.C. Rich's own humbucking pickups that to pull in all the expanded sounds that 7 and 8 strings have to give. The neck of the Villain Escape has a 16" radius and 24 jumbo frets, making it a comfortable and inviting guitar to play.

If you like a guitar that looks as deadly as it sounds, the Warlock Lucky 7 and Lucky 8 could be for you. These guitars feature one of B.C. Rich's most well-known, aggressive body designs in sustain-loving mahogany, along with a 12" radius on the fretboard. You'll find Duncan Designed Blackout pickups on the Warlock, giving it a cool look as well as great response across the entire extended string count.

Like the Warlock, the JRV Lucky 7 and Lucky 8 are mahogany-bodied guitars with a 12" fret radius, though they use a maple neck instead of the Warlock's mahogany. The distinctive V-shaped body of the JRV models is kitted out with all-black hardware and a set of Seymour Duncan pickups that do a great job handling the extra strings. If you want a JRV 7-string guitar with a few extra perks, check out the JRV-7. This axe has a lot in common with the other JRV models, but adds on a quilted maple top and ebony fretboard and turns the hardware up a notch with a genuine Floyd Rose tremolo bridge, Grover turners and B.C. Rich B.D.S.M. pickups.

Want to go all-out with even more strings? Then turn your attention to the Perfect 10 Bich. It's based on the original hand-made "Rich Bich" models that brought the 10-string guitar into the limelight in the hands of artists like Slash, Joe Perry and Dave Mustaine. The Perfect 10 uses Rockfield humbuckers and its 24-5/8" scale makes the ten strings surprisingly manageable.

7, 8 or 10 strings - whichever count is right for you, expanding the range of your guitar is also a way to expand your own signature sound. With a B.C. Rich extended-range guitar in your hands, you can add your own name to the list of guitarists who have made music history playing these instruments.