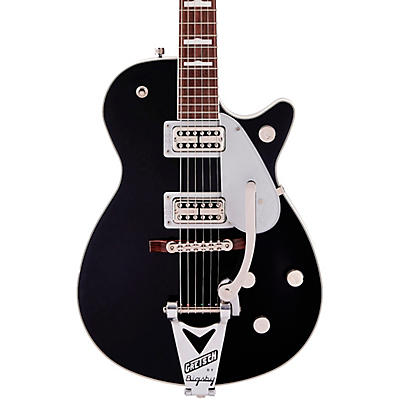 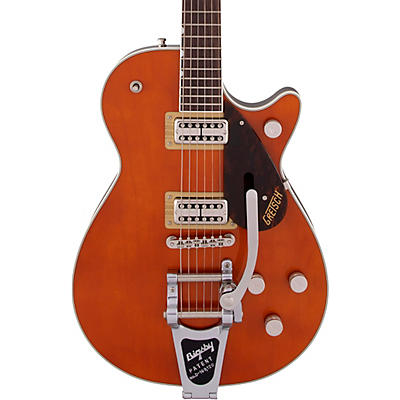 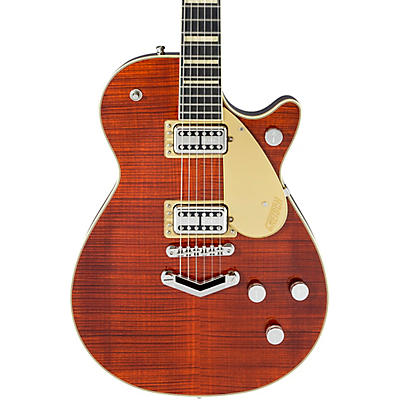 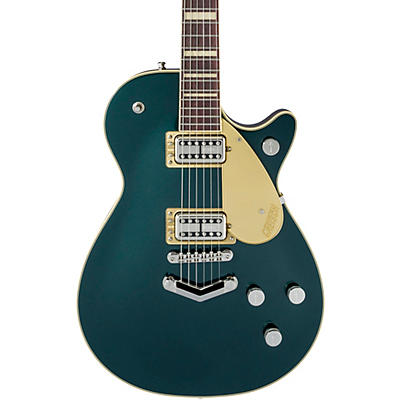 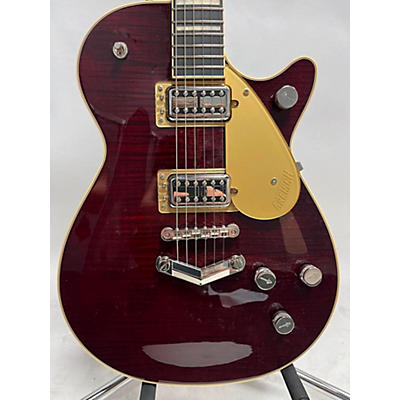 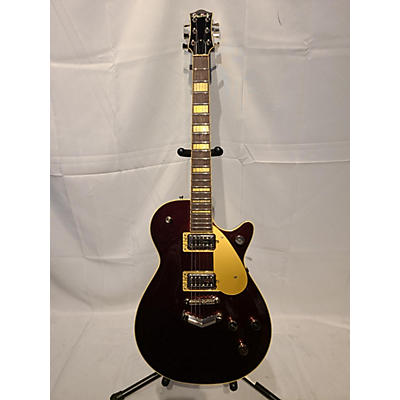 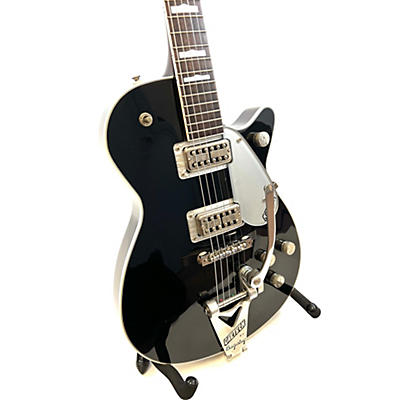 The Gretsch Duo Jet guitar was first introduced in 1953, at the dawn of the modern solidbody electric guitar era. While a few companies and individual craftsmen had previously experimented with solidbody electrics, it was Fender's Telecaster and Gibson's Les Paul models that first popularized the solidbody design, and moved the market beyond the standard amplified acoustic guitars of the time, like Gretsch's own Electromatic and Synchromatic models. In response to the new Fender and Gibson designs, Gretsch delivered the Duo Jet model 6128, a dual-pickup, single-cutaway guitar that somewhat resembled a Les Paul, but with a character and tonality all its own. The Duo Jet, rather than being a true solidbody, was actually chambered, with cavities routed in the mahogany body for a more nuanced tonality and a bit of weight relief, with a laminated top capped with black Nitron plastic. Early models featured a pair of DeArmond Dynasonic single-coil pickups, each with separate volume controls; plus a single tone knob and a master volume control. Later variations included a pair of Gretsch Filtertron humbucking pickups, and a tone switch, rather than the master tone knob, as well as various combinations of TV Jones PowerTron pickups, Bigsby vibrato tailpieces, double-cutaway models, and some eye-catching finish options, including Western Orange and Cadillac Green.

While the Duo Jet has been offered with numerous variations over the years, that famous Gretsch twang and growl has become a favorite of rockers, rockabilly players, punks, and anyone else who needs an axe with distinctive tone and killer looks. Perhaps the most famous early Duo Jet player was George Harrison, who acquired his in the early 60s, and used it during the Beatles' meteoric rise to fame, as well as posing with it on the cover of Cloud Nine, his 1987 solo comeback album. Another Duo Jet pioneer was rockabilly legend Cliff Gallup, who played his with Be-Bop-A-Lula singer Gene Vincent and His Blue Caps. Gallup was a major influence on Jeff Beck, who recoded a tribute album to him called Crazy Legs, featuring a Duo Jet on the cover and in the grooves. Other Jet players, with various model incarnations like the Silver Jet and the Firebird, include Joe Perry, Neil Young, Roy Orbison, AC/DC's Malcolm Young, and Billy Zoom of legendary country-punk band X. And while Keith Richards might be more associated with Teles, he's strutted his stuff on stage behind a Duo Jet as well.

Today, Gretsch offers a lineup of Duo Jets to scratch your retro itch, from the G6128G George Harrison signature model, to the G6128TCG Cadillac Green, or Custom Shop models like the gorgeous Flame Maple Top version, which features an f-hole and, of course, a classic Bigsby vibrato unit. Whatever your vibe, you owe it to yourself to check out a Gretsch Duo Jet - they've been a part of rock history since the beginning, and they're still going strong. Order yours today!