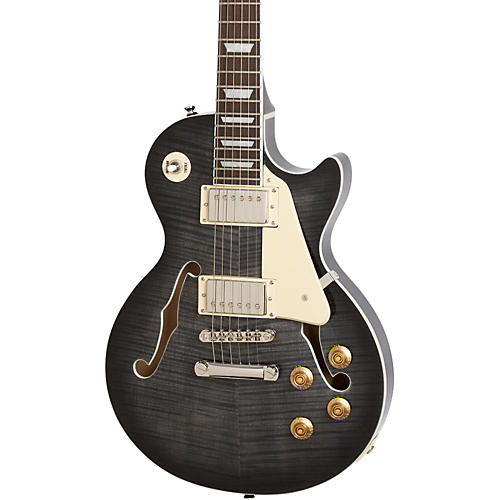 Epiphone, a world leader in archtop design, presents the Les Paul ES PRO, a true ES-style archtop that combines Epiphone’s long tradition of building...Click To Read More About This Product

Epiphone, a world leader in archtop design, presents the Les Paul ES PRO, a true ES-style archtop that combines Epiphone’s long tradition of building superior archtops with the classic sound and profile of the world’s #1 electric guitar, the Les Paul.

Featuring an ES-style body f-holes with traditional ES-body bracing, Epiphone ProBuckers with coil-tapping, a Dual-Action Truss Rod, Grover Rotomatic machine heads, LockTone bridge, and Stopbar tailpiece. The Les Paul ES PRO archtop hollowbody features a Flame Maple Top and Maple Body with the classic Les Paul profile with carved f-holes inspired by legendary ES-style archtops like the Casino, Sheraton, and the “335.” The body top and back has single layer white binding along with a cream pickguard.

The Les Paul style 24.75 in. scale neck has single layer Pure White binding and is made from Mahogany with a 1960s SlimTaper D-profile. The Rosewood fingerboard has medium jumbo frets, a 12” radius, and “Trapeze” pearloid inlays found on '50s era Les Pauls. Inside the ES-PRO hollow body is a center block and counter brace, both hallmarks of a true ES-style archtop.

ProBucker Pickups with “P.A.F” Sound
Like many Epiphone Les Pauls, the new Les Paul ES-PRO is powered by Epiphone’s critically acclaimed ProBucker pickups, designed to recreate the first generation of hand wound Les Paul humbuckers from the 1950s that today can only be found in rare “Sunburst” Les Pauls that go for over $150,000 on the vintage market.

Epiphone ProBucker humbucker pickups are made with the same 42 gauge Elektrisola wire as the originals plus 18% Nickel Silver unit bases and covers, the same alloy used by Gibson for their BurstBucker pickups. The Les Paul ES-PRO features an Epiphone ProBucker-2 in the neck position and a slightly “hotter” Epiphone ProBucker-3 in the bridge position for leads. Both pickups also come with coil-tapping, activated by a simple push/pull of each pickup’s volume control, which allows players to mix single coil and humbucker tones together in endless combinations.

Each pickup has “Les Paul” style volume and tone controls with Gold RidgeTop "top hat" knobs with metal pointers. The 3-way Pickup Selector has a white toggle cap. The Les Paul ES-PRO’s archtop body design combined with its vintage-toned ProBucker pickups makes it one of today’s most versatile electric guitars. And, it’s available for the fraction of the cost of a vintage ES-style archtop or Les Paul.