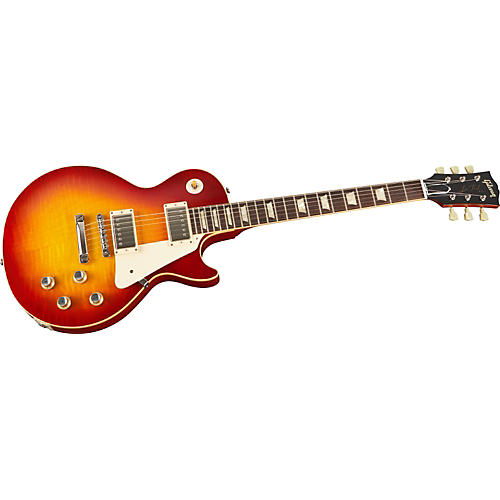 The Gibson Les Paul guitars of the late '50s and early '60s have become among the most prized electric guitars on the planet. But to say "the" Les Paul is actually somewhat misleading because Les Paul guitars varied not only from year to year as the model's specs evolved, but even within the same year of manufacture.

To accurately represent the variations in specifications and finish within original examples manufactured in 1960, Gibson is offering three versions of this hallowed vintage electric guitar.

At the start of 1960, the Gibson Les Paul retained the same specs as its predecessor from 1959, although it did receive the official "Les Paul Standard" designation in place of the former "Les Paul Model" (a name that its headstock nonetheless still retained). Among these details were the full, rounded neck profile, top-hat control knobs, and Heritage Cherry Sunburst or Heritage Dark Sunburst finish, and these are the very characteristics with which the Gibson Custom Shop has imbued.

The first Version of the 50th Anniversary 1960 Les Paul Standard might be confused for a 1959 Les Paul Model if not for the 1960 serial number stamped into the back of the guitar's headstock at the dawn of this new decade, and the R0 serial number of this 50th Anniversary electric guitar. This version is available in heritage Cherry Sunburst and Heritage DarkBurst finishes.

Version 2 represents the neck's transition from full to slim”a progression that was gradual, rather than sudden”in the form of a Custom Shop 50th Anniversary 1960 Les Paul Standard with thinner, yet still somewhat rounded and "elliptical" neck profile, based on painstaking research and detailed scans of several transitional '60s Les Paul guitars that were studied by the Custom Historic and Engineering team. To represent this alteration visibly, Version 2 of the Gibson Custom Les Paul RO Pilot Run will be offered in two classic "faded" 'Burst colors: Light Iced Tea and Sunset TeaBurst.

The third version of the Custom Shop 50th Anniversary 1960 Les Paul Standard Guitar has the slim-taper neck for which late-'60 Les Paul guitars have become famous, along with the double-band tuners and gold top-hat control knobs with the "new" silver inserts that were fitted to these electric guitars. Version 3 features a '60s Cherry Burst finish.

Furthermore, Version 3 accurately represents the changes in the finishing process at Gibson in the latter part of 1960, in its more vibrant, colorfast Cherry Sunburst, a finish that stood the test of time somewhat better than many of the sunbursts that preceded it.

In addition to these pertinent details, the Gibson Custom Shop 50th Anniversary 1960 Les Paul Standard Guitars pack all the tonal nuances and unparalleled playability that really helped to make these Gibson electric guitars distinguished in the hands of an artist like Eric Clapton, who wielded a slim-necked 1960 Les Paul Standard on the most influential blues-rock album of all time, John Mayall Blues Breakers with Eric Clapton, often referred to as the "Beano" album. The time-tested tonewood combination of mahogany and maple, the classic duo of Tune-O-Matic bridge and stopbar tailpiece, and a pair of Gibson's prized PAF-style BurstBucker humbucking pickups all work toward a tonal splendor that few guitars can equal.

Body and Finish
Crafted from a book-matched figured maple top and a lightweight one-piece mahogany back, these Gibson Custom Shop Les Paul guitars are finished in low-build nitrocellulose lacquer, and are available in a range of colors to suit each Version, including Heritage Cherry Sunburst, Heritage Dark Sunburst, Light Iced Tea Burst, Sunset Tea Burst and Cherry Sunburst.

Neck and Headstock
The electric guitar's neck and headstock are made in the classic tradition of the original 1960 Les Paul. Carved from a single piece of quartersawn mahogany, and topped with a rosewood fingerboard, the design incorporates Gibson's lauded 17-degree back-angled headstock, which contributes greatly to the Les Paul guitar's resonance and sustain.

Pickups and Electronics
The Gibson Custom Shop 50th Anniversary 1960 Les Paul Standard carries a complement of pickups and hardware that accurately reflect the original equipment on the most desirable Les Paul guitars ever made. A pair of BurstBucker pickups captures that highly sought-after "PAF" style tone, while quality CTS potentiometers with "bumblebee" tone caps translate the signal in pure vintage style.

Hardware
As befits a Custom Shop Anniversary Les Paul of this caliber, the 50th Anniversary Gibson 1960 Les Paul Standard is equipped with Gibson's most accurate, period-correct reproduction hardware, including Kluson-style tuners, a Tune-O-Matic bridge and stop-bar tailpiece both made from the correct metals and plated in nickel, and Gibson's original aluminum strap buttons, all of which contribute to the vintage look and tone of the Les Paul guitar.