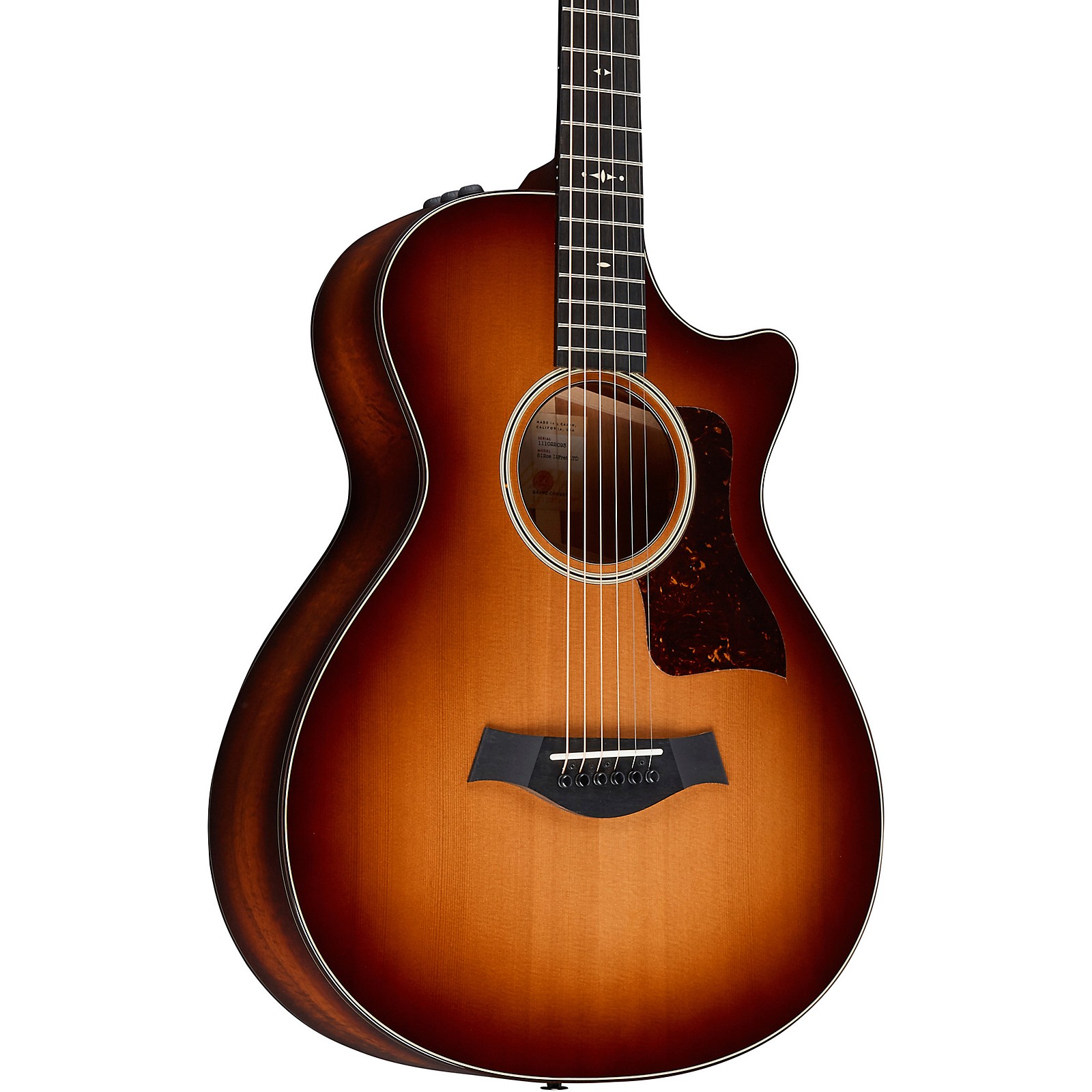 This limited edition Grand Concert guitar features back and sides of solid Hawaiian koa, a solid Western red cedar top, and V-Class bracing. Standard...Click To Read More About This Product

This limited edition Grand Concert guitar features back and sides of solid Hawaiian koa, a solid Western red cedar top, and V-Class bracing. Standard specs include a scale length of 25-1/2", a nut width of 1-3/4", and a Venetian cutaway. Appointments include a single-ring rosette, binding of faux tortoiseshell and West African ebony, Century fretboard inlays in grained ivoroid, a black graphite nut, and a glossy shaded edgeburst finish on the entire guitar. It ships with ES2 electronics in a deluxe Taylor hardshell case.

Body Shape
Taylor's Grand Concert is slightly smaller that its Grand Auditorium and yields controlled overtones, so the sound won't occupy a lot of sonic space. This is often a key consideration when other instruments are in the mix, such as in a performance or recording environment, and it allows the guitar to be heard more clearly. The Grand Concert pairs well with both 14-fret and 12-fret neck-to-body construction, and offers an articulate voice with top-end chime. It's perfect for fingerstyle players and light strummers, though flatpickers are known to enjoy its tonal character too. Its intimate size makes it lap/couch-friendly, and a great fit for players who find smaller instruments more physically comfortable.

Tone Wood Pairing
Though the tonewood pairing of Hawaiian koa and cedar isn't currently offered in Taylor's Koa Series, the two woods have a harmonious history at Taylor, a special sonic kinship that traces back to the early days of their Grand Auditorium body style in the mid 1990s. Andy Powers is excited to reunite these complementary woods on this limited edition offering, in the form of Grand Auditorium and Grand Concert models dressed in the 500 Series appointments.

"Those two woods are a heavenly match," he says. Though koa brings instant cachet thanks to its exotic beauty, Andy is quick to emphasize cedar's virtues: soft-touch responsiveness and broad, harmonically rich tone, which together have traditionally appealed to fingerstyle players. When you marry cedar's traits with koa's midrange mojo and then add V-Class bracing to the mix, you have a recipe for a new dimension of acoustic sound. Andy describes the impact of V-Class on a cedar top in terms of its ability to spread the soundboard energy in a way that allows a note to bloom and develop.

"We want the sound to disperse evenly over the top so that it vibrates in a cohesive way," he explains. "Cedar tends to be relatively stiff across then grain in proportion to its resiliency along the grain, which makes a mechanically efficient sound transmitter. As a result, only a little harmonic content is absorbed, making the overtone content rich and full. It feels like the guitar lights up without needing to hit it hard."

It's a "smoky, thick, complex" sound, to use Andy's words — a natural counterbalance to koa's sweet, bell-like response. The result is a beautifully dynamic sound in which overtones can resonate and sustain while the fundamental note remains clear.

"For me, the magic is in the midrange," Andy says of koa. "In a way, it sounds like the Hawaiian language: sweet, lyrical, melodic. The way the notes flow from the guitar makes them sound effortless."

In the Grand Concert 512ce 12-Fret, those qualities are even more pronounced. The compact body/neck configuration gives this guitar a featherweight feel, and the bridge has been shifted toward the center of the lower bout, which alters how the cedar top is articulated. Sonically, this allows the small body to punch above its weight, producing a bigger, more powerful voice. That change affects the player, too — the strings feel slightly more slinky under your fretting hand, making it easier to bend notes and form difficult chords.

V-Class Bracing
Taylor's V-Class bracing is a fundamental innovation in acoustic guitar design. It marks an important evolution beyond traditional X-bracing, introducing an entirely new platform for acoustic performance. It is essentially a "sonic engine" that optimizes the response of an acoustic guitar in three key ways: by boosting volume, sustain, and by largely resolving the intonation (in-tune-ness) issues that have long plagued acoustic guitars. V-Class bracing creates purer, more orderly notes that don't cancel each other out or sound "off". They have clearer, more consistent response, and the whole fretboard is brought into greater sonic alignment for a more musical playing/listening experience.

Electronics
Taylor's ES2 is a revolutionary pickup design that delivers the latest in Taylor's ongoing innovation in acoustic guitar amplification. The heart of the Expression System 2 is Taylor's patented behind-the-saddle pickup, which features three uniquely positioned and individually calibrated pickup sensors. Because the pickup doesn't sit under the saddle, the bottom of the saddle comes in full contact with the bridge, allowing all the nuance of the guitar's tone to come through clearly whether playing acoustically or plugged-in. The location of the sensors enables a more dynamic range of acoustic sound to be captured than ever before while playing plugged-in.

Together with Taylor's custom-designed "professional audio"-grade preamp, this system produces exceptional amplified tone and responsiveness. On stage through a PA, plugged into your favorite acoustic amplifier, or direct into recording software, the Expression System 2 faithfully conveys the voice of your Taylor guitar. The Taylor Expression System 2 operates through a proprietary 9-volt battery compartment and easy-to-use volume, and active bass and treble controls.


A beautiful combination of wood, plus high-quality Taylor design, makes the limited edition 512ce a must. Order today.