Join For Free
Share your location Order within 7 hrs 48 mins. 12 secs.
In Stock & Ready to Ship Orders placed before 3 p.m. ET usually ship the same business day (except weekends and holidays).
Ship to
Please enter 5 digits
Free Shipping Shipping and Delivery Times If we promise a delivery date and a delivery attempt is not made by this date, we will provide a refund of any shipping fees associated with your order. Questions? Call 800-449-9128
site1skuK46059000001000 true MFI=0 true Change Location 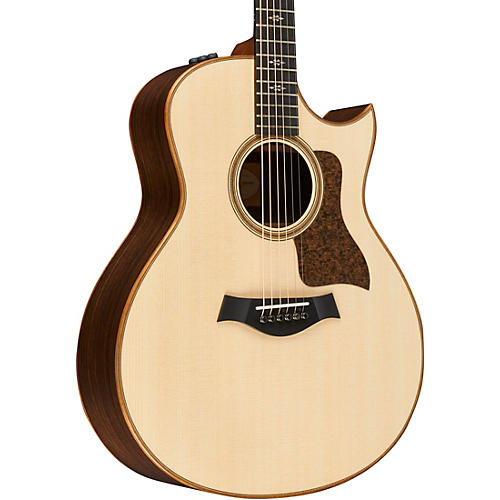 Taylor’s redesigned rosewood/spruce 700 Series guitars, which includes this 716ce Grand Symphony Acoustic-Electric, are the latest in the Taylor line to showcase an inspiring tonal and visual makeover. The result is a bolder musical voice with a refreshed visual aesthetic that blends rootsy appeal with warm, wood-rich details to give the series a distinctive musical personality. Tonal upgrades include a switch from Sitka spruce to Lutz spruce, which produces a powerful tonal response comparable to older, high- grade Adirondack spruce, and gives players a higher volume ceiling. Two other tone-enhancing refinements include Taylor’s new Performance bracing and the use of protein glue for the bracing and bridge. Together with the Lutz top they optimize the tonal response, capturing all of rosewood’s classic richness and strengthening the fundamental focus. These guitars promise to give back to players everything they put in and then some. New appointment details include non-figured koa binding; a 3-ring herringbone-style rosette featuring mirrored, bias-cut Douglas fir with maple/black trim; top edge trim of bias-cut end-grain Douglas fir with maple/black accents; a new “Reflections” fretboard inlay in pale green abalone; and a new weathered brown pickguard with a matte finish. The 716ce features a full-gloss body and comes with a Venetian cutaway and Taylor Expression System 2 electronics.

Body Shape
Compared to the Taylor Grand Auditorium, the Grand Symphony has a bigger, rounder lower bout and slightely wider "waist" area, and the bigger sound board (top) means more tonal output. Expect a meaty lower midrange and strong treble shimmer. A GS is best if you want a guitar with a robust low end, strong volume when strumming or flatpicking, and clear articulation in response to light fingerpicking attack.

Tonewood Pairing
A guitar's top is the primary filter and distributor of vibrating string energy through the guitar, which means it has a huge impact on its sound. Lutz Spruce is a naturally occuring hybrid of Sitka and White spruce. Sitka is the most prevalent guitar top wood of the modern era because it blends stiffness and elasticity in just the right proportions which translates into broad dynamic range with crisp articulation. Lutz spruce takes these attributes and blends them with those of White and Englemann spruce, with an end result resembling old Adirondack spruce. When combined with Taylor's bracing architecture, guitars are more powerful, richer and louder than before. Solid Indian rosewood back and sides complement the Lutz top with sound that's made it one of the most popular tone woods ever. Rosewood produces the strongest bass response among the tone woods commonly used for guitars, with a slightly scooped midrange. Rosewood's sweeping frequency range - deep lows that assert a throaty growl with sparkling highs - rings out with bell-like, high-fidelity clarity. It yields a full-range acoustic voice with complex overtones and extended sustain.

Electronics
Taylor's ES2 is a revolutionary pickup design that delivers the latest in Taylor’s ongoing innovation in acoustic guitar amplification. The heart of the Expression System 2 is Taylor’s patented behind-the- saddle pickup, which features three uniquely positioned and individually calibrated pickup sensors. Because the pickup doesn't sit under the saddle, the bottom of the saddle comes in full contact with the bridge, allowing all the nuance of the guitar's tone to come through clearly whether playing acousticly or plugged-in. The location of the sensors enables a more dynamic range of acoustic sound to be captured than ever before while playing plugged-in. Together with Taylor’s custom-designed “professional audio”-grade preamp, this system produces exceptional amplified tone and responsiveness. On stage through a PA, plugged into your favorite acoustic amplifier, or direct into recording software, the Expression System 2 faithfully conveys the voice of your Taylor guitar. The Taylor Expression System 2 operates through a proprietary 9-volt battery compartment and easy-to-use volume, and active bass and treble controls.

Make an impression with the Taylor 716ce. Order today.