Join For Free
Share your location Order within 7 hrs 48 mins. 12 secs.
In Stock & Ready to Ship Orders placed before 3 p.m. ET usually ship the same business day (except weekends and holidays).
Ship to
Please enter 5 digits
Free Shipping Shipping and Delivery Times If we promise a delivery date and a delivery attempt is not made by this date, we will provide a refund of any shipping fees associated with your order. Questions? Call 800-449-9128
site1skuL48528000001000 false 914=1;MFI=3 true Change Location 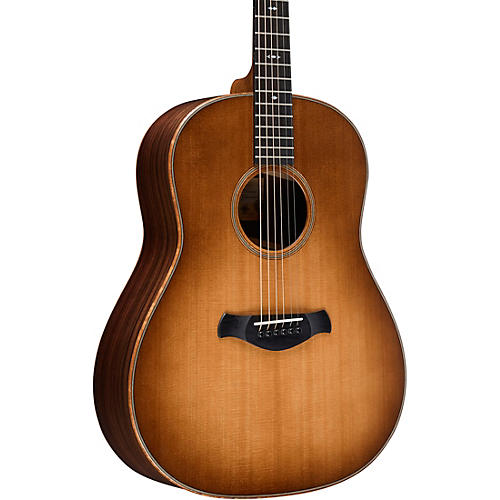 An exclusive Taylor round shoulder dreadnought design with V-Class bracing that produces a warm, seasoned tone.

The Grand Pacific is a new Taylor shape (introduced in 2019) that delivers a new Taylor sound. Built on the innovative V-Class bracing platform, the Grand Pacific is a fully realized example of how body shapes and tonewoods can be sculpted to create distinct and highly desirable tonal palettes. The Builder's Edition 717 Grand Pacific acoustic guitar, further showcases Taylor's pursuits to create the most player-friendly guitars in both sound and feel: a compound carve neck profile, rolled fretboard edges, chamfered body edges, and new Curve Wing bridge shape. The Grand Pacific is a unique entry to the dreadnought category, possessing clear low-end power, tonal consistency and sweeping versatility. The Builder's Edition 717 Grand Pacific acoustic guitar ships in a luxurious hardshell case with Western floral pattern, made by Taylor for optimal fit and protection.

Tonewood Pairing
V-Class bracing helps create an even clearer delineation between the tonal character of each wood. Sitka Spruce is the most prevalent guitar top wood of the modern era. It blends stiffness and elasticity in just the right proportions which translates into broad dynamic range with crisp articulation. The Sitka spruce top on this 717 Grand Pacific features a special seasoning process called "torrefaction," a method of roasting the wood to produce an aged tonal character with greater acoustic resonance and responsiveness. Rosewood, as a general rule, imparts a sound that can be described as "wet" and lives near the other end of the spectrum from mahogany. Rosewood produces a unique harmonic complexity because it doesn’t damp or mute any of the string’s own harmonic content, and even adds some of its own. So every note played has a thick, rich, luxurious character. It almost feels as if there's a little bit of reverb in it.

Body Neck Electronics Other
WARNING: This product can expose you to chemicals including Lead, which is known to the State of California to cause cancer, and to cause birth defects or other reproductive harm. For more information go to www.P65Warnings.ca.gov.
Shop with a Friend
Free Shipping Learn More
2-Year Free Warranty on Guitars