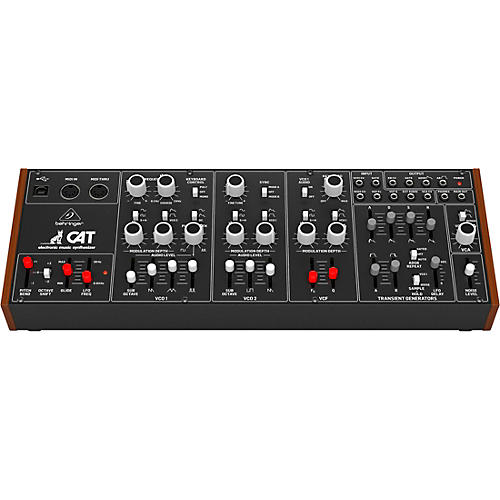 he 1970s spawned the first truly portable analog synthesizer, and while it was quickly adopted by lots of renowned musical artists including Jan Hammer, Chick Corea, Rick Wakeman, Jean-Michel Jarre, Isao Tomita and Keith Emerson to name a few, it was somewhat temperamental and very expensive.

In 1975, a new synth strolled into town. The Cat as it was called was an analog, duophonic, three octave synthesizer that was very similar to the ARP Odyssey. Its keyboard would produce two control voltages that were routed into its two VCOs. An ultra-affordable and even more feature-packed homage to that iconic synthesizer comes in the form of the Behringer CAT. Conjure up the virtually any sound imaginable with incredible finesse and ease. The pure analog signal path is based on authentic VCO, VCF and VCA designs in conjunction with 4 variable and simultaneous oscillator shapes and Duophonic/Paraphonic capabilities. Owning a CAT is like having your own personal time machine, enabling you to freely embrace the past – or shape the future. And the best of all, it doesn’t scratch.

True to the original

Great care has been taken in engineering the CAT, including the true to the original analog circuitry, legendary VCO, VCF and VCA designs that come together to recreate classic tones that are evocative of classic electronic music. This highly-focused attention to detail is what gives the CAT its ultra-flexible sound shaping capability. It gives you the ability to cover a lot of amazing tones from super-fat bass, tasty leads – and all the way to full on dreamy ambience from the far reaches of your imagination.

The synthesizer tracks laid down in the 1970s and 80s in progressive rock, wave and synth-pop have become classics and have inspired many other artists. The CAT lets you recreate all that magic – or design some incredible and original sounds that will make you a legend in your own right.

The CAT has the ability to accept any keyboard controller via MIDI. The signals generated can be tweaked via the Pitch Bend slider which can bend a note up or down one octave. Bump this up to two octaves by flipping the Octave Shift switch up or down. Use the Glide slider to change how fast a note transitions to another; up is faster, down is slower. Combine that with the LFO Freq slider to control the LFO and ADSR repeat tempo and you can create some amazing pulsating portamentos.

The very heart of the CAT’s sound is its two VCOs. The Duophonic/Paraphonic nature of the CAT allows both oscillators to be controlled independently. Use the Fine and Coarse Frequency controls to tune VCO1 to VCO2. Keyboard control on the CAT can be set to either Mono or Poly. Poly mode lets VCO1 generate the highest note played on the keyboard while VCO2 handles the lowest allowing two notes to be played simultaneously. Setting the switch to Mono mode makes VCO1 generate the lowest note depressed on the keyboard.

Waveform switches on both VCOs allow different waveforms to be patched in from the LFO. Choose between Sine, Square, Sample and Hold and even pitch modulation through each VCO. Turning the Modulation Depth knobs in either direction controls the intensity of the effect. VCO2 also comes with a Sync switch that locks VCO1 with it and has them act as one huge oscillator to produce more complex waveforms and dramatic results. Mix VCO1 into VCO2 or vice versa and the CAT can produce some really tasty tones that make themselves at home in your next synth jam.

Each VCO on the CAT comes equipped with their own waveform sliders where you can adjust the volume of each type of VCO wave form. Pump up the Sub Octave, Sawtooth, Square, Triangle or Pulse waves or mix them all together and create some truly unique tones.

As if combining two VCOs wasn’t amazing enough, the CAT comes with another set of claws in the form of a VCF filter section. Here you can get more complex and robust tones by incorporating VCO1 into the mix. Introduce more waveforms and manipulate the Q slider to emphasize harmonics and Filter Cutoff slider which acts as a low-pass filter. Turn the CAT into a really funky bass machine or an out-of-this-world synth that creates some searing lead tones. You can even create some amazing drum sounds by manipulating the VCOs, VCF and ADSR.

To give the signal even more character, you can use the CAT’s Transient Generator to create a detailed voltage transient every time a key is depressed. Adjust the Attack, Decay, Sustain and Release via the matching sliders and to shape your signal. The AR transient generator works similarly to the ADSR but with less detailed control over the envelope. You can also set the ADSR to automatically repeat or only when a key is held down. The Sample and Hold switch can be set so the VCO1 setting is sampled or, when set to Noise mode, produce a random output pattern. Slide the LFO Delay control up or down to determine when the LFO will reach its maximum output after a key is depressed.

The ins and outs

The CAT features a whole slew of Inputs and Outputs that expand its capabilities beyond what you can see out of the box. You can route external control voltages to VCO1 or 2, the VCF and even pump in some external line-level audio into the CAT. You can even connect the CAT to other external synthesizers through the Gate, ADSR, AR or Keyboard Outputs. The CAT’s 16-note Poly Chain function lets you combine multiple synthesizers for up to 16-voice polyphony – and it provides vastly improved reliability and stability over its 1970s and '80s predecessors.

We just can’t help ourselves – like you, we're gear-heads, too. For those who want the numbers, the CAT has 47 controls, all laid out in a highly-intuitive format that puts the joy back into your music creation.

When it comes to not just pushing envelopes but creating them, the CAT gives your imagination its voice – and it’s so very affordable. When modern performance calls for classic analog sound – it calls for the Behringer CAT!

A brief history of analog synthesis

The modern synthesizer’s evolution began in 1919, when a Russian physicist named Lev Termen (also known as Léon Theremin) invented one of the first electronic musical instruments – the Theremin. It was a simple oscillator that was played by moving the performer’s hand in the vicinity of the instrument’s antenna. An outstanding example of the Theremin’s use can be heard on the Beach Boys iconic smash hit “Good Vibrations”.

Get that legendary sound. Order today.