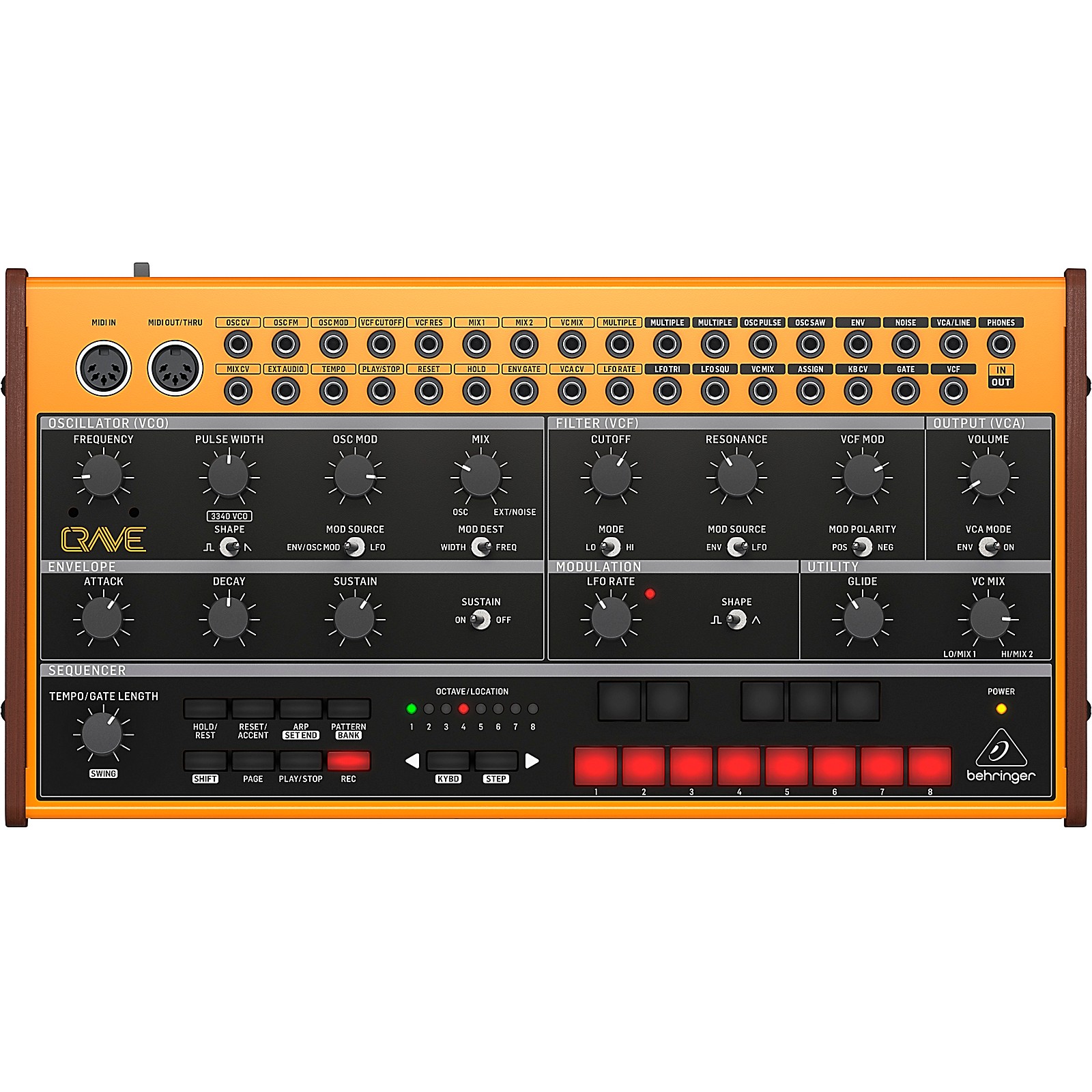 The 1980s and ’90s spawned a new “wave” of synth users including Michael Jackson, Madonna, Dr. Dre, Radiohead, film-maker John Carpenter and a host o...Click To Read More About This Product

A powerful synth at an affordable price.

The 1980s and ’90s spawned a new “wave” of synth users including Michael Jackson, Madonna, Dr. Dre, Radiohead, film-maker John Carpenter and a host of others, all empowered by sounds emanating from the legendary Prophet-5*. An ultra-affordable homage to that iconic synthesizer with all the features of the original and then some, such as a 32-step sequencer and arpeggiator, the CRAVE lets you conjure up virtually any sound with incredible finesse and ease. With its pure analog signal path, authentic 3340 VCO with pulse and sawtooth wave outputs, plus extremely flexible VCF and VCA filters, the CRAVE is sure to become your favorite keyboard. Owning the CRAVE is like having your own personal time machine, enabling you to embrace the past – or make your imprint on the future.

True to the Original
Great care has been taken in engineering the CRAVE, including the true to the original analog circuitry, legendary VCO, VCF and VCA designs, all of which combine to make it easy to recreate the classic sound performance. This highly-focused attention to detail is what gives the CRAVE its ultra-flexible sound shaping capability, which covers everything from super-fat bass and lead tones to stunning effects – and all the way out to the otherworldly sounds of your imagination.

Big, Fat Tones
The inspired synthesizer tracks laid down in the 1980s and ’90s are etched in the annals of progressive rock, wave, EDM and synth-pop music forever, making them truly classic in every sense of the word. The CRAVE lets you recreate all of that magic – or design incredibly fat and original sounds that will make you a legend in your own right.

Authentic 3340 Oscillator
CRAVE’s 3340 Voltage Controlled Oscillator (VCO) provides your choice of pulse or reverse-sawtooth waveforms. When pulse is selected, the width can be varied using the Shape switch for narrow, squarewave or wide pulse – with a tuning range of ± one full octave. The VCO can be modulated via the envelope or the low frequency oscillator (LFO). Performance is further enhanced by the Mix control, which balances the levels of the internal VCO and noise generator. This amazing flexibility gives you the tools to be your creative best.

Versatile VCF
The very heart of CRAVE’s sound is its Classic Moog* 24 dB ladder filter, which lets you freely experiment with the Cutoff Frequency, Resonance and Modulation to dial in the perfect sound. CRAVE’s filter Mode switch can be set to either Lo- or Hi-pass for selecting the range of your choice.

16-Note Poly Chain Ready
While it is a monophonic instrument (one note at a time), CRAVE’s 16-note Poly Chain function lets you combine multiple synthesizers for up to 16-voice polyphony – plus provides vastly improved reliability and stability over its 1970s and '80s predecessors.

Rock Right out-of-the Box.
Your CRAVE comes ready to rock, thanks to its default signal routing that doesn’t require lifting a single patch cable to instantly create amazing sounds. The semi-modular architecture lets you easily tap into the inspired sounds of 1980s and ’90s progressive rock, wave, EDM and synth-pop music synthesizer tracks that made rock and roll history – or to design incredibly fat and original sounds that will make you a legend in your own right.

The Envelope, Please...
CRAVE’s Envelope generator features Attack, Decay and Sustain knobs that help you craft incredible sounds, plus a Sustain On/Off switch, which can either sustain the note for as long as the key is held, or start the decay as soon as the attack setting times out.

Onboard Sequencer & Arpeggiator
CRAVE’s sequencer allows you to program up to 32 steps of notes and rests and save them as a pattern. You can record, save and recall up to 64 patterns, all of which can be stored in the 8 banks, each holding up to 8 patterns. Your sequences can be played either in Keyboard mode, where you create and store the pattern, or Step mode, which allows you to interact while composing a pattern. The onboard Arpeggiator features 8 patterns (you can use just by playing a chord, which the arpeggiator then sequences through your selected pattern. Both the sequencer and arpeggiator in the CRAVE are fun, mesmerizing and totally addictive...

Truly-Analog LFO
Thanks to its dedicated and fully-analog Low Frequency Oscillator (LFO), CRAVE lets you choose from either triangle or square waveforms, and features an LED that provides visual feedback of the adjustable LFO Rate.

Modulate Me to the Max
In addition to the great sound-sculpting features already mentioned, the CRAVE has still more to offer. The noise generator can also be used as modulation source to create distortion-like effects, which will send your solo soaring into the stratosphere. Glide (portamento) lets you sweep seamlessly over time from one note to the next, creating smooth-as-silk transitions that few other instruments can emulate. You can even modulate the pulse wave via the LFO, envelope or manually – for sounds ranging from mild to wild.

Controls & Connectivity
For those who want the numbers, CRAVE has 47 controls, all laid out in a highly-intuitive format that puts the joy back into your music creation. And you can expand CRAVE’s tone-sculpting capabilities beyond your wildest dreams by utilizing the 18 x 14 I/O matrix for incredibly vast and flexible patching options.

Unleash Your Imagination
When it comes to not just pushing envelopes but creating them, CRAVE gives your imagination its voice – and it’s so very affordable. When modern performance calls for classic analog sound – it calls for the Behringer CRAVE.