Join For Free
Share your location Order within 7 hrs 48 mins. 12 secs.
In Stock & Ready to Ship Orders placed before 3 p.m. ET usually ship the same business day (except weekends and holidays).
Ship to
Please enter 5 digits
Free Shipping Shipping and Delivery Times If we promise a delivery date and a delivery attempt is not made by this date, we will provide a refund of any shipping fees associated with your order. Questions? Call 800-449-9128
site1skuL47039000001000 true MFI=0 true Change Location 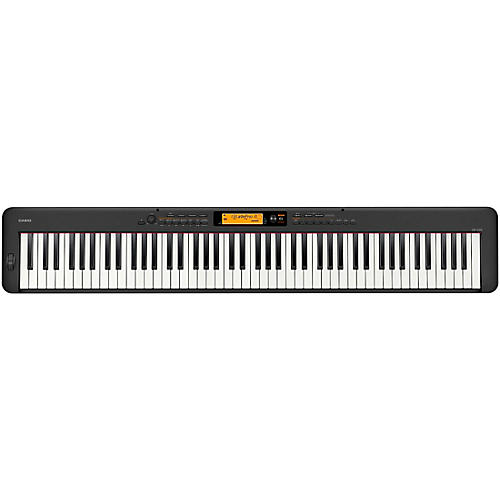 The Casio CDP-S350 is an 88-key digital piano with built-in speakers and graded hammer playing action. It is an inexpensive instrument, but it supplies several features above and beyond the most basic models in its category. Plus, weighing just 24 lb. and standing a mere 52” wide, the Casio CDP-S350 piano is among the most portable keyboards in its class.

Many digital keyboards in this price range supply just a few sounds. The CDP-S350 has 700. It addresses all of the instruments in the orchestra, as well as electric guitar and basses, many drum kits and a variety of synthesizer tones. Any of these sounds can either be split across the keyboard or layered together. It has a library of 152 songs you can listen to or play along with.

Unlike many instruments in its category, the CDP-S350 also contains a large bank of accompaniment rhythms. From rock to jazz, from funk to waltzes, the CDP-S350 will analyze your left hand placement and provide a drum rhythm, bass line and chordal accompaniment. All at your referred tempo and in your preferred idiom. It’s a great way to keep your development on the keyboard fun, and an easy way to entertain others as you are learning.

There are several key beds offered with Casio digital pianos. The CDP-S350 features an 88-key weighted action keyboard with three separate velocity sensitivity settings apart from “Off.” The weighting of the keys is such that the lower keys have a lighter touch and the lower keys have a heavier touch. This graded action resembles that of an acoustic piano, so moving to an acoustic piano is not at all disorienting.

As in the case of the deep bank of tones, as in the case of the rhythm accompaniment, the Casio CDP-S350 has more modern keyboard functions than many instruments in its category or price range. It has a real-time 6-track digital MIDI recorder that can hold five songs of about 12,000 notes each. 64-note polyphony helps in the sequencing, as does the onboard flash drive.

You can save your sequence and song data to the USB flash drive. The flash drive is apart from the USB to Host port, which allows you to use the CDP-S350 as a MIDI controller. Once you’ve offloaded sequence and registry data, just clear out the memory and start fresh. When you want to hear your old compositions, load them back in from the drive. Or, you can play previously recorded songs from a flash drive if it has compatible data.

It also has an Audio In jack. With this 1/8” stereo input, you can play MP3s or any other kind of audio through the CDP-S350. Use it as a listening source or a practice aid. It also has a 1/4" stereo headphone jack, whose output can also be used to patch into a PA system or a home stereo unit. The CDP-S100 will operate for up to 14 hours on six AA batteries.

Keyboard Sounds Connectivity Onboard Features Other