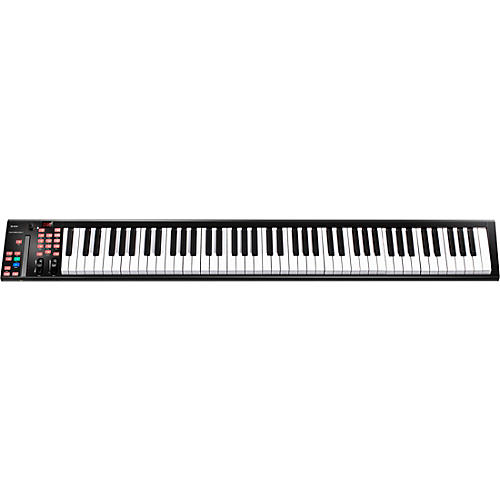 Join For Free
Share your location Order within 7 hrs 48 mins. 12 secs.
In Stock & Ready to Ship Orders placed before 3 p.m. ET usually ship the same business day (except weekends and holidays).
Ship to
Please enter 5 digits
Free Shipping Shipping and Delivery Times If we promise a delivery date and a delivery attempt is not made by this date, we will provide a refund of any shipping fees associated with your order. Questions? Call 800-449-9128
site1skuL78698000001001 true MFI=5 true Change Location

88 semi-weighted piano keys give authentic feel to this keyboard controller.

The iKeyboard 8X has all the controls you need right at your fingertips. The controller section features a touch fader with LED feedback to control and automate levels and other parameters, plus mute, solo and rec buttons, with track and bank selection. The backlit LED touch fader reacts in real time with your DAW. It will synchronize automatically with different channel values when switching between channels.

A full transport is provided for playback, recording, looping and changing automation modes. The large rotary encoder with LED ring can be used for panning, setting send levels, controlling plug-in parameters and more.

The iKeyboard 8X includes factory presets for most popular DAWs out there, including Cubase, Nuendo, Logic Pro, Pro Tools, Ableton Live, Samplitude and Studio One. Every control on the iKeyboard 8X can be custom-mapped to any MIDI application using the included iMap software. The iKeyboard 8X uses Mackie Control and HUI protocols for presets and automatic mapping, and can be configured for general MIDI values as well.

Do it all with this keyboard controller. Order your iKeyboard 8X today.