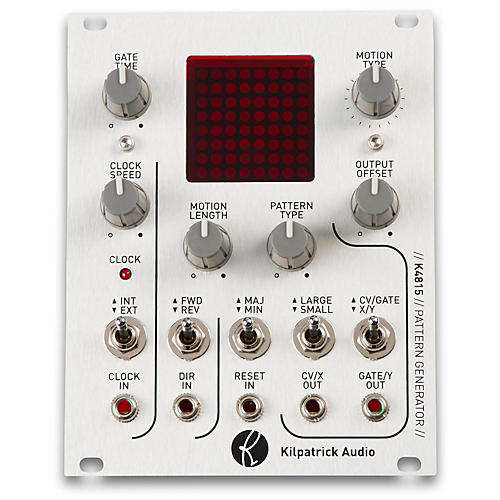 Join For Free
Share your location Order within 7 hrs 48 mins. 12 secs.
In Stock & Ready to Ship Orders placed before 3 p.m. ET usually ship the same business day (except weekends and holidays).
Ship to
Please enter 5 digits
Free Shipping Shipping and Delivery Times If we promise a delivery date and a delivery attempt is not made by this date, we will provide a refund of any shipping fees associated with your order. Questions? Call 800-449-9128
site1skuJ41669000000000 true true Change Location

As its premier offering in the modular synthesizer world, the K4815 Pattern Generator by Kilpatrick Audio packs incredible power into a 20HP Eurorack module that offers virtually unlimited creative potential for modular players. The K4815 can produce notes and varying control voltages for a wide range of musical applications. Its unique approach to music creation will have you finding melodies and rhythms you’ve never heard before. Unlike a step sequencer, where the player picks each note in a sequence, the K4815 creates sequences by combining a scale, a visual pattern (as shown on the display) and a sequence playback motion to determine the rhythms and notes that are actually played. Other parameters can adjust the note and sequence length, as well as the transposition, direction of playback, and so on.

The K4815 is fully analog and MIDI compatible. The MIDI interface is available on an internal connector and is compatible with the K1600 MIDI Converter from Kilpatrick Audio. You can even build your own MIDI interface (See: AN-1 Simple MIDI Interface for a free design). The analog connections support three inputs for connecting analog clock, and analog control of the playback direction and pattern playback reset. The CV and GATE outputs are high-performance analog outputs for controlling VCOs and envelope generators. High quality 12-bit DACs ensure accurate tuning, and jumper selectable voltage offset and trimming are provided internally to allow integration with most modular equipment.

The essence of any sequencer is the clock. The K4815 has a high-stability internal clock that can generate a wide range of tempos. The unit also supports analog (5V) clock on the CLOCK IN connector or MIDI clock. When the internal or analog clock is used, MIDI signals are generated automatically, making the system a useful MIDI clock generator or converter.

New ways of creating melodies and control signals help to break new ground in music and sound. The K4815 helps you explore new melodies and rhythms using a unique concept of generating patterns. Unlike random pattern generators or ones based on various mathematical concepts, the K4815 bases its music-making foundation on simple scales, visually designed patterns, and intelligently designed motions. The player can control these three elements in realtime, creating an enormous variety of sounds in a visual way that is fun to use. Everything happens on the 8x8 LED matrix, which is both a visual indicator and a conceptual view of how the system works internally. Scales, patterns and motions are all mapped to points on the matrix that show exactly what is happening.

The K4815 concept can be thought of as three distinct layers:

Scales - Underneath the 8x8 LED matrix are the notes which are assigned to each of the 64 points on the grid. The selected scale can be major or minor, large or small. These are selected with the MAJ/MIN and LARGE/SMALL switches. Only four choices might seem like a limitation, but what happens on the other two layers ultimately affects the rhythms and melodies that are produced.

Patterns - Patterns are visually designed icons, symbols and patterns which define which notes will play. They are shown in the background at all times. There are 32 patterns which can be selected with the PATTERN TYPE knob. If a point on the 8x8 LED matrix is lit, the underlying scale note is active. If the playback ball lands on that point, its note will play.

Motions - Motions define how a sequence is played. Each motion defines up to 64 steps in a sequence. Each step can land on any of the points on the 8x8 LED matrix. If a step lands on a point which is lit, a note will play. There are 64 different motions, some sequential and musically-designed, and others more abstract or geometrically-designed. By using MIDI it is possible transpose the scale, and also to start and stop motion playback with note commands, changing the K4815 into a special type of auto-arpeggiator.

Ultimate manipulation and a new way of thinking about sequencing and tone generation.