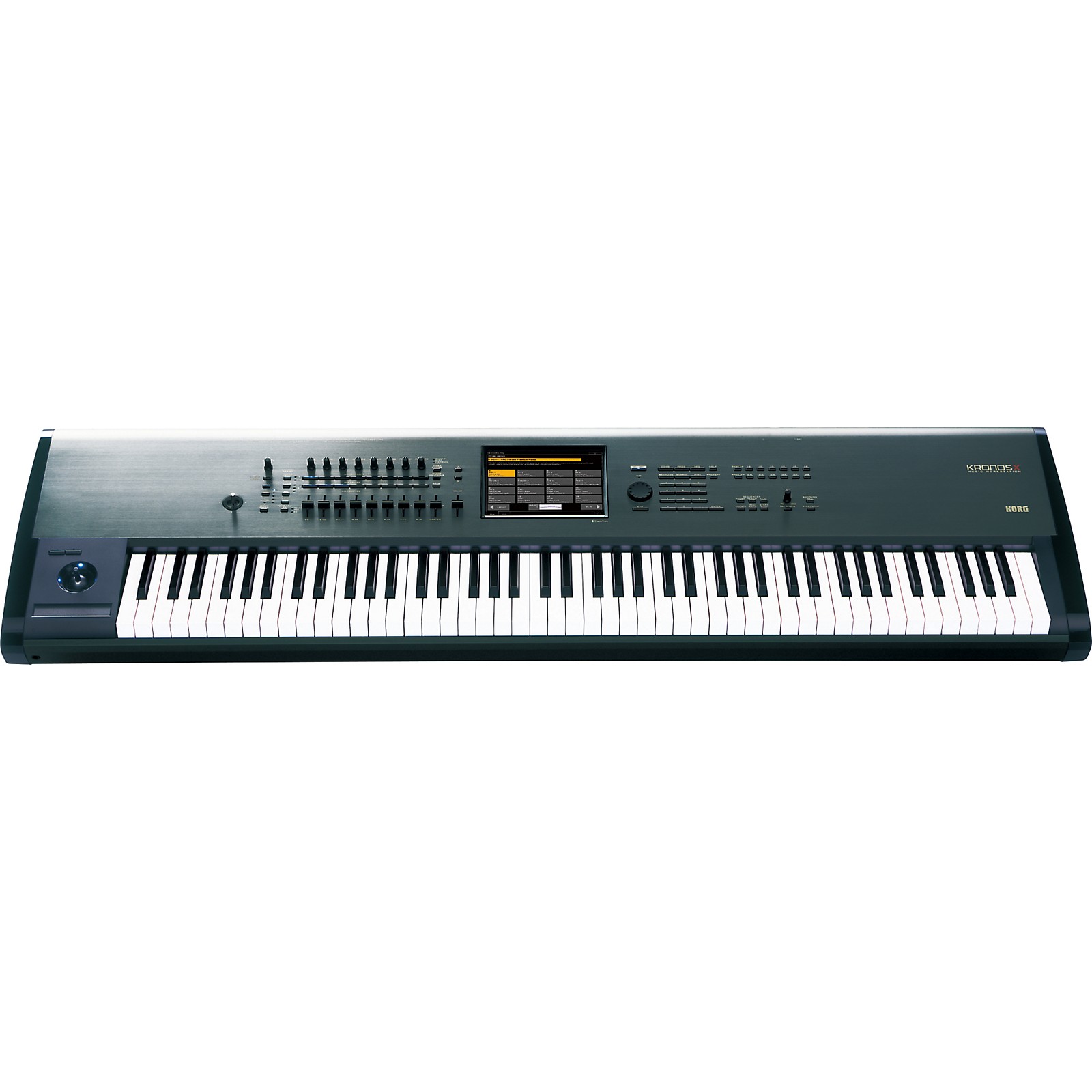 The 88-key Kronos X builds upon the now-legendary Kronos Music Workstation and adds a larger SSD (and the ability to add another SSD for even more st...Click To Read More About This Product

The 88-key Kronos X builds upon the now-legendary Kronos Music Workstation and adds a larger SSD (and the ability to add another SSD for even more storage), and 2GB of available sampling RAM (for 3GB total) which gives you X-tra fast, direct access to even more of your sonic arsenal. Say goodbye to long load times and enjoy a seamless connection between you and your sound. It's also preloaded with OS v.2.0 to turn your own samples into EXS libraries, which are playable directly from the internal SSD. Using standard USB-ethernet adapters, you'll get amazingly fast file transfer so you'll have more time to work on your music and less time waiting to work.

The Next-Generation Instrument for Live, Production, and Sound Design
The Kronos X Music Workstation is the single instrument designed for live performing musicians; for artists creating in a studio or computer-based production environment; and for musicians and sound designers seeking the ultimate synthesizer. In creating Kronos, Korg listened to many musicians, heard their requests, and has vowed to deliver.

PRODUCTION - satisfying the producer, music director, and musician
For many, the studio is where the work gets done; from laying down tracks, to building up grooves for an on-stage extravaganza, to delivering the soundtrack for today's media rich world. For these creative leaders, Korg has equipped the Kronos X Music Workstation's sequencer with 16-track MIDI tracks, plus 16 audio tracks, Korg's Open Sampling System, dazzling hi-fidelity effects, as well as flawless plug-in integration with many popular DAW platforms. Kronos is also equipped with phenomenal sound, dynamic drums, and an impressive array of premium sound effects. Add to that the ability to use KARMA (explained below), the Drum Track, and the sequencer's RPPR to greatly speed up and enrich the music creation process.

SYNTHESIS - programming joy for the enthusiast and sound designer
In addition to being Korg's premier workstation, Kronos X has it in its blood to satisfy the programmer, sound designer, and synthesizer enthusiast; the musician who dreams of turning visions of the cosmos into sound, of tweaking parameters to conjure invisible sounds from the ether. Kronos X rekindles Korg's founding dream that is at the core of synthesis: the exhilaration and enjoyment of creating new sounds, sounds never before heard. A variety of exclusive Korg technologies drive the synth engines to provide astounding results”VMT (Virtual Memory Technology); CMT (Component Modeling Technology); Physical Modeling, Digital Synthesis, Wave Sequencing, MDS (Multi-Dimensional Synthesis); KARMA and more!

9 Synthesizer Engines, United in One Instrument
Kronos X contains 9 distinct synthesizer/sound engines. While each is worthy of a separate product in its own right, Kronos X brings them all together into a single, integrated musical instrument. Dynamic voice allocation and new technologies allow all sound engines to smoothly share a stable, enhanced hardware platform. The results are nothing less than spectacular.

SGX-1 Premium Piano
Piano sound engine
To accurately capture the rich character of a concert piano, Korg abandoned working within the limitations of existing sampling methods and took advantage Virtual Memory Technology (VMT), able to play large samples directly from the internal high-capacity Solid State Disk (SSD). The SGX-1 Premium Piano sound engine offers two distinctive grand pianos; a rich German D piano, and a robust Japanese C model. Each uses superb, unlooped stereo samples sampled at 8 velocity levels for each and every key. Thoughtful attention to detail preserves the realism and warmth of the piano sound; this extends even to sampling and reproducing the body resonances of the grand piano, as well as the mechanical noise that occurs when the keys are played, or the damper pedal is pressed and released. The foundation of any keyboard instrument is the piano, and the SGX-1 engine allows Kronos to confidently deliver on this sonic ideal.

EP-1 MDS Electric Piano
Electric piano sound engine
Korg's new EP-1 sound engine is dedicated to faithfully recreating 6 of the most popular classic electric pianos. The MDS (Multi-Dimensional Synthesis) technology eliminates the transitions between velocity-switched samples, and does away with the unnatural behavior of looped samples. It also provides the user with unique control over the tines, reeds, and noise elements that make up the essential character of these timeless and coveted electromechanical instruments. The MDS sounds respond smoothly to the subtleties of the player's keyboard touch. This technology also delivers an astounding dynamic range so that the energy of climactic passages is accurately preserved. Each of the 6 electric piano models provides realistic simulations of the period amp, cabinet, speaker, and even the hard-to-find vintage effects that gave the original instruments their distinctive sound. From the sounds, to the touch, to the effects; every element has been coordinated in a single package to create the ultimate electric piano experience.

CX-3 Tonewheel Organ
Tonewheel organ sound engine
The original Korg CX-3 combo organ went on sale in 1980. Loved by musicians around the world, this classic organ reappeared in 2000 as a new product with the same name, but using the latest technology of the time to faithfully model the tonewheel organ sound. In Kronos, the CX-3 engine precisely models this classic tonewheel instrument. Proprietary Korg technology has been used to perfectly reproduce the vacuum tube amp, and effects such as Vibrato/Chorus and the "must-have" rotary speaker. Even the instability, fold-back, leakage, and noise of the tone wheels have been obsessively analyzed and recreated. Take full advantage of Korg's exclusive EX mode and switch from 9 to 18 drawbars (13 footages plus 5 to define the percussion) and generate even richer and more detailed sounds. The organ sounds heard in legendary performances”some recreated here by the original artists”are now yours for the playing. Go ahead and experience these classic organ sounds, reborn for the present day.


HD-1 High Definition Synthesizer
Flagship PCM, sampling, and Wave Sequencing sound engine
The HD-1 was named "High Definition" because of its superior sound, starting with Korg's proprietary low-aliasing sample playback oscillators, full-bandwidth multimode resonant filters, and extraordinarily fast & smooth envelopes and LFOs. Once again, Korg's SSD and Virtual Memory Technology (VMT) gives the HD-1 access to a larger sample set”gigabytes in size”than could be normally stored using internal memory. The HD-1 covers all of the essential sounds in exquisite detail, from orchestral to classic rock to hip-hop, all instantly available. The extensive array of samples provided by Kronos X is unparalleled by previous hardware synthesizers or samplers, and is a superb fit for film, video, and sound effect work.

MS-20EX Legacy Analog Collection
Analog modeling sound engine
Debuting in 1978, the MS-20 unified a 37-note keyboard with a vertically oriented control panel, and was easily obtainable by those smitten by expensive and gigantic furniture-sized synthesizers. With a thick and solid sound, aggressive filters, and patching that opened up limitless potential for creating sounds, the MS-20's rich personality captivated countless synth freaks. Using Korg's CMT (Component Modeling Technology) the MS-20EX faithfully reproduces the MS-20 while dramatically expanding its patch panel functionality. Modulate filters with audio-rate oscillators; turn audio inputs into control signals; control all of the original knobs with mod sources including additional envelopes, LFOs, and realtime controllers. It's a tweaker's dream, but even without the patch panel, the MS-20EX would make waves with its unique, aggressive tone”due in large part to its signature filters, which are completely different from those in either the AL-1 or the PolysixEX. The Kronos X version is now very polyphonic.

PolysixEX Legacy Analog Collection
Analog modeling sound engine
The Polysix first appeared in 1981, offering six-voice polyphony, program memory, and a surprisingly competitive price tag. With its self-oscillating four-pole filter, smooth analog oscillator and sub-oscillator, plus a lush Chorus/Ensemble effect, the PolysixEX extends the abilities of the original in many creative ways. The strings and pads that were such a major feature of the Polysix will be invaluable when you need the sounds of the early '80s. The classic arpeggiator built into the original Polysix is also provided. Korg added modulation of every control on the front panel, for a world of sounds impossible on the original. It's also very well-suited to hands-on control via the Kronos' Tone Adjust; with a knob, slider, or switch for almost all of the original Polysix controls. As a bonus, it's also capable of extremely high polyphony.

MOD-7 Waveshaping VPM Synthesizer
VPM/Waveshaping/PCM processing sound engine
Combine Variable Phase Modulation (VPM), wave-shaping, ring modulation, samples, and subtractive synthesis, plus a modular patch-panel system, and you have the MOD-7. Exceptionally versatile, it offers everything from classic FM keyboards, bells, and basses (including the ability to import sounds from vintage DX synths) to rhythmic soundscapes and sparkling, epic pads. Vast sample-mangling capabilities, with incredible flexibility and power, let you create intensely rich processing environments: combine multiple stages of filtering, waveshaping, and ring modulation”even use samples as FM modulators”all patched together however you like.

STR-1 Plucked String Synthesizer
Physical modeling sound engine
Based on the physical modeling know-how Korg developed over the course of many years, this struck/plucked-string physical modeling sound engine takes advantage of cutting-edge technology. The STR-1 begins with highly playable sounds whose tone responds to your touch in ways that are difficult for a PCM sound engine to replicate. These include acoustic guitar, electric guitar, harpsichord, clavinet, harps, bells, and ethnic instruments. Then the STR-1 goes beyond, allowing the creation of sounds that obey physical laws, but that don't exist in reality. Play harmonics on a metal bar "plucked" by a piano or sing into a guitar string”with the STR-1, it's all possible. You can also process samples and live audio input through the physical model”including audio feedback from any of the Kronos X effects. While some of the Kronos engines look back in time, this is a sound engine of the future, one that allows the synthesizer programmer to construct truly new sounds.

Premier Artist Contributions
In order to take full advantage of these 9 sound engines, Korg called on respected musicians to guide their sound design team towards their individual ideals. Responding positively, numerous world-class players contributed their time, energy, and critical listening to help them zero in on making the sound respond the way they hear it. Certain artist signature sounds were tested, judged, and tweaked by the likes of Jordan Rudess, Russ Ferrante, Lyle Mays, George Duke, Tom Coster, Jeff Lorber, Frank McComb, John Novello, and several other artists known for their serious love of sound and for their critical, demanding ears.