Join For Free
Share your location Order within 7 hrs 48 mins. 12 secs.
In Stock & Ready to Ship Orders placed before 3 p.m. ET usually ship the same business day (except weekends and holidays).
Ship to
Please enter 5 digits
Free Shipping Shipping and Delivery Times If we promise a delivery date and a delivery attempt is not made by this date, we will provide a refund of any shipping fees associated with your order. Questions? Call 800-449-9128
site1skuK40857000001000 true MFI=0 true Change Location 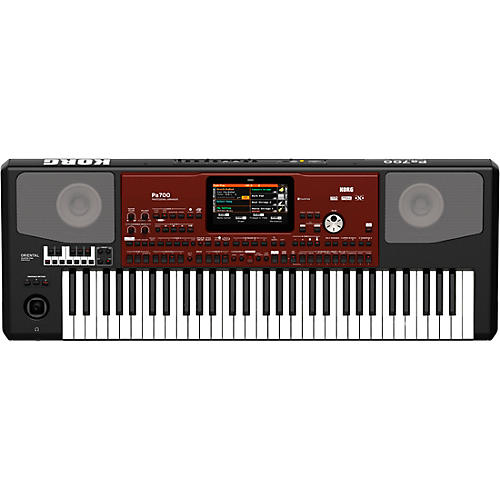 Redesign of a favorite arranger keyboard with quarter tones.

The Pa700 blends the high sound quality, rich programs, authentic styles, powerful features and ease of localization of previous Korg Pa Series models with some of the best features from the highly acclaimed flagship Pa4X to effect a technological marvel and a rich and soulful instrument into one astonishing arranger keyboard. This model features quarter-tone scales for Arabic and other music that uses non-Western scales.

On top of its highly evolved arranger architecture, the Pa700 bundles in technology from their acclaimed Korg Kaoss series, a wide-open palette for creativity on an X/Y touch grid. It also has a Mic/guitar connection so you can use the amplification features in the keyboard to process and amplify other signals.

Its style library spans the nation and the globe, as does its incredible sound library. If you are familiar with any of the Korg Pa models, you will feel instantly at home, and if you aren't, it should only take a few hours before you are arranging on the fly like a pro. The Pa700 sets a new standard in its class for a fun instrument at home or a professional entertainer's primary keyboard.

An Arranger for Middle Eastern MusicExpand the versatility of your studio or live rig with the Korg Pa700 Oriental arranger keyboard. This arranger is loaded with the same features as the Pa700 but focuses on Sounds, Styles, and instruments for playing Middle Eastern music styles. With many advanced features from Korg's flagship Pa4X arranger (like KAOSS effects and MIDI control) and the Defined Nuance Control (DNC) sound engine, you'll be able to produce lifelike sounds and incredibly dynamic performances. You get over 370 styles, a large TouchView display for easy navigation, and over 1,700 sounds. Simply put, the Korg Pa700 Oriental is a powerful yet easy-to-use arranger workstation for Middle Eastern music.The only differences between the Korg Pa700 Oriental and the Pa600 is the quarter tone mini-keyboard and the expanded library. The Quarter Tone Sub Scale keyboard lets you select which keys/notes you want flatted to the nearest quarter tone. Four preset buttons give you instant access to the most common quarter-tone scales. Korg created a specific library of Sounds and Styles that are tailored to Middle Eastern music genres: the Oud, bouzouk, kanoun, various percussion, and many other instruments are included.

Its interface and logic are familiar and intuitive, and the sounds and styles are better than ever. Order one today.