Join For Free
Share your location Order within 7 hrs 48 mins. 12 secs.
In Stock & Ready to Ship Orders placed before 3 p.m. ET usually ship the same business day (except weekends and holidays).
Ship to
Please enter 5 digits
Free Shipping Shipping and Delivery Times If we promise a delivery date and a delivery attempt is not made by this date, we will provide a refund of any shipping fees associated with your order. Questions? Call 800-449-9128
site1skuH78018000000000 true MFI=0 true Change Location 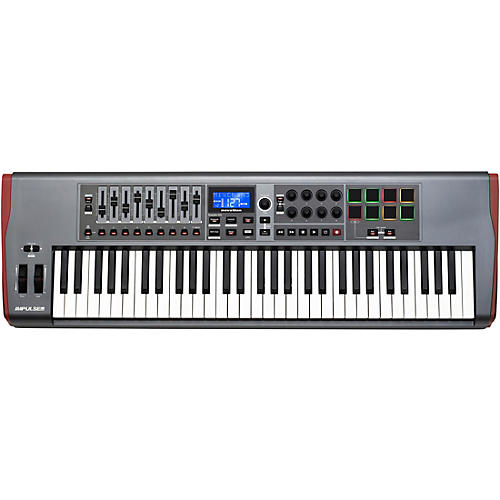 Novation's Impulse series are a range of professional USB/MIDI controllers. The Impulse 61 has a 61-key precision keyboard and full control surface powered by a brand new version of Novation's Automap control software - Automap 4 (which makes getting hands-on with your DAW/plug-ins fast and simple). Impulse also has 8 back-lit drum pads which can warp arpeggios, roll beats and launch clips in Ableton live.

Impulse has 8 drum pads which are velocity-sensitive - with aftertouch! These are back-lit with 3-colour LEDs which means they can do things other drum pads can't¦

Arpeggiator Warping
Impulse has a built in Arpeggiator which enables you to play a turn any chord into an arpeggio. The drum pads take this a step further by enabling you to warp arpeggios. By switching the 8 pads in or out you can change the rhythm of the arpeggio in real time (this works brilliantly with drums!)
You can also change the speed, shape, syncopation and gate time of the arpeggio.

Impulse will also work with other DAWs such as Studio One, Garage Band and FL Studio.