Join For Free
Share your location Order within 7 hrs 48 mins. 12 secs.
In Stock & Ready to Ship Orders placed before 3 p.m. ET usually ship the same business day (except weekends and holidays).
Ship to
Please enter 5 digits
Free Shipping Shipping and Delivery Times If we promise a delivery date and a delivery attempt is not made by this date, we will provide a refund of any shipping fees associated with your order. Questions? Call 800-449-9128
site1skuL58195000000000 true MFI=0 true Change Location 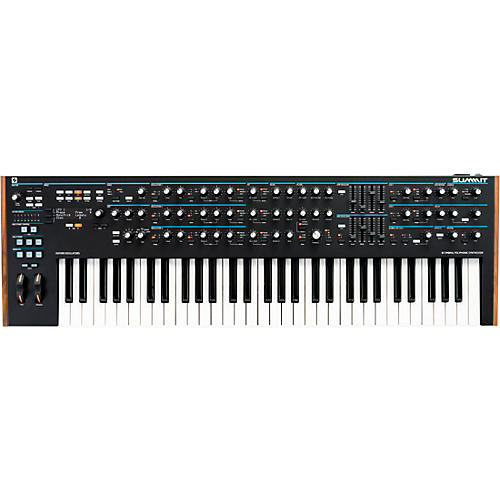 Peak taken to its logical extreme.

Built on the innovative foundations of Novation’s critically acclaimed Peak, Summit is a three-oscillator-per-voice, 16-voice keyboard synth aimed at the professional or semi-professional musician seeking an inspiring, empowering instrument for use both live and in the studio. In fact, Summit effectively puts the power of two Peaks at your fingertips, enabling two completely independent patches to be split or layered across the keyboard, or switched between on the fly.

It also expands on Peak’s layout, with many "hidden" controls and functions made accessible on the front panel—FM routing, LFOs 3 and 4, all arpeggiator parameters and more—plus the addition of pitch and mod wheels. Summit also features numerous new filter options, and an audio input for processing external sources with its reverb, chorus and delay effects.

At the heart of Summit are three digital New Oxford Oscillators per voice, hosted on the FPGA (Field Programmable Gate Array) chip. As well as generating authentic analog-style waveforms at incredibly high resolution, this also facilitates FM and wavetable synthesis for the design of rich, complex and highly textural raw tones. Each voice feeds into a true stereo signal path comprising dual analog filters, three stages of analog distortion and analogue VCAs; while a wealth of modulation assignment options and three colorful effects bring movement, life and polish to your patches.

Free to use with Novation Summit and Peak synths, the Wavetable Editor unleashes the power of the wavetable oscillators, allowing you to design your own waveforms and expand your creative potential. The Editor, which is part of the Novation Components browser-based platform, features drawing tools and a Live Edit mode, so you can draw your own oscillator shapes and preview them in real time. The audio import feature lets you load in your own audio to be used as the oscillator waveform. Built into the Wavetable Editor is a curated selection of space-themed audio from the NASA sound library. Also included is exclusive wavetable content from production giants Noisia, who have created a preset pack to stir your creativity. The Wavetable Editor is free to use—just connect your Peak or Summit to your computer via USB and head to the Novation Components page in a compatible browser like Google Chrome.

Firmware Update 2.0
In Novation’s biggest update for Peak, firmware update v2.0 brings in essential improvements and a multitude of features across stereo controls, modulation, unpredictability, and effects, that give you powerful tools to shape your sound.

Stereo
New spread modes, panning per voice, and panning in the mod matrix give additional control and allows for sound design in the stereo field. Now you can create bigger, wider and more intricately textured soundscapes.

Bug Fixes
The firmware update v2.0 includes a number of bug fixes. The full details can be found in the release notes.