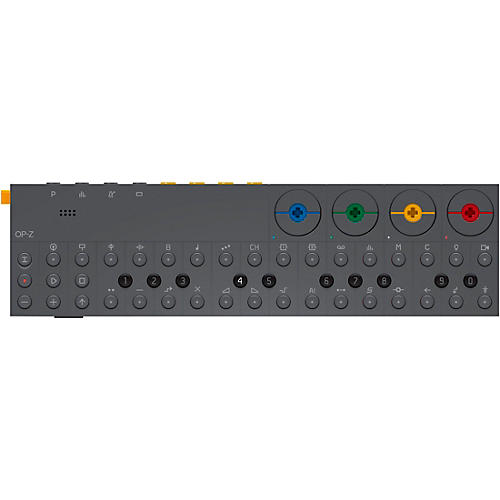 Join For Free
Share your location Order within 7 hrs 48 mins. 12 secs.
In Stock & Ready to Ship Orders placed before 3 p.m. ET usually ship the same business day (except weekends and holidays).
Ship to
Please enter 5 digits
Free Shipping Shipping and Delivery Times If we promise a delivery date and a delivery attempt is not made by this date, we will provide a refund of any shipping fees associated with your order. Questions? Call 800-449-9128
site1skuL10559000000000 true true Change Location

Following the widely popular OP-1, the OP-Z pushes the boundaries of this iconic synth even further. Coming in at about half the size, with even more DSP than the OP-1, the OP-Z consumes less energy than its older brother, allowing you the ability to sequence songs across 16 tracks, just about anywhere you want to take it without the risk of running out of power. One of the most notable differences between the two is the OP-Z has traded its onboard display, instead, it can connect wirelessly to your ios device and the OP-Z app for more behind the scene control parameters. Still, OP-Z is about a lot more than just composing music. The Z stands for the third dimension, the depth, the creativity involved in making music. Imagine animated art and videos that accompany your live show, or sequenced lighting, all the way down to composing your own interactive software. Some people would call a device like this a dream machine. Teenage Engineering calls it the OP-Z.

The next generation of portable instruments
OP–Z is an advanced fully portable 16-track sequencer and synthesizer, with a range of both sample based and synthesis based sounds. It's the world's first stand-alone sequencer of its kind, that lets you sequence music, visuals, lights and more. OP–Z can be used completely standalone and comes with an intuitive led lit interface. When you want next level real-time visual feedback, you can use the screen on your ios device. Hardware features include a USB-c host and device, wireless communication over, 4-pin 3.5 mm stereo headphone and line-out, accelerometer, user replaceable battery and built-in microphone.

Component-based step sequencing
One of the basic concepts of the OP–Z is its ability to run each track totally independent from one another. Tracks can run at various speeds, have different lengths and loop points. Separate tracks can even jump-cut back and forth irregularly and randomly if you want. Using this you can make a short sequence sound more or less different each time it is repeated in your composition. A composition is divided into tracks and each track is built from sequencer steps – just as you are used to, but on top of that, Teenage Engineering has added something truly unique which they call step components that add an extra dimension of instructions for each step. This new tool makes composing a track much more dynamic, deep and rich – a long needed addition to traditional sequencing. The tracks on the OP–Z is polymetric. Meaning that each track has dynamic track length from 1 up to 144 steps. Making it possible to work in high or low track resolution. You can choose to go completely off-grid or stay 100% quantized. Thanks to the OP–Z real-time melodic analysis you can at any time automatically transpose whole sequences in different scales across six octaves.

Bring your own screen
Connect your OP–Z wirelessly to an iOS device. Thanks to the extremely energy efficient Bluetooth technology your OP–Z will run and sync to your screen for hours and hours, without you having to charge the unit. With the OP–Z app you see the numbers and graphs behind the music you create in real time. At a glance, you know how your instruments are balanced in the mixer or just how much effect is applied to each instrument. The screen adds another dimension to your interaction with the OP–Z. Unlocking multi-touch features, you can adjust multiple mixer sliders at once or use the smooth touchpad to adjust effects or filters. Perfect when performing live.

Pitch bend and microphone
On the front of the OP–Z you find the pitch bend in the form of a soft, pressure-sensitive, thumb button. The pitch bend adds an analog touch to any instrument – perfect for that solo break. Lift the OP–Z to your mouth, and the accelerometer activated microphone will turn on. Hold the function buttons to change the settings for the microphone.

Built for live performance
On the back of your OP–Z you find the project, mixer, tempo and the screen buttons. While holding down one of these buttons you access some of the OP–Z main functionality. The project button lets you choose one of the 10 projects where you work on your songs. Each project contains 16 patterns and each pattern contains 8 instrument tracks. The mixer gives you access to a live mixer where you fine tune the balance of your current track. One-two-three-four – hold to change tempo, add a click or counting voice-over to your track. The screen button opens up the main menu if you have a screen connected. Select menu item using the red dial. The screen button also activates the microphone. Press the mixer button to toggle between clean voice pass-through or the two real time OP–Z fx-buses. Last but not least, keep an eye open for upcoming new hardware features using the expansion port.

Photomatic
Snap a series of photos and sequence them to a beat. Compose a song and create a completely synchronized music video 'a-la-minute'. The Photomatic feature included in the OP–Z app is just pure instant fun. When you want some quick and unique graphics, perfectly synched to your beats, open up Photomatic shoot away, add some filters and you have your instant music video. Photomatic lets you add up to 10 sequences with 24 pictures each, all possible to edit with the colored dials. The sequences can be synched to any track while playing live.

Punch-in fx
Punch-in fx is a concept inspired by Teenage Engineering's series of pocket operators, where you can add a layer of live performance effects, and either record them or just to enjoy in real-time. On OP–Z the punch-in fx is a separate programmable track just like any instrument. The punch-in fx is one of the unique features that makes the OP–Z stand out from a traditional sequencer. This makes the OP–Z a powerful live performance instrument, extending the possibilities of a pre-programmed track to endless variations.

Create your own world of music with OP-Z!