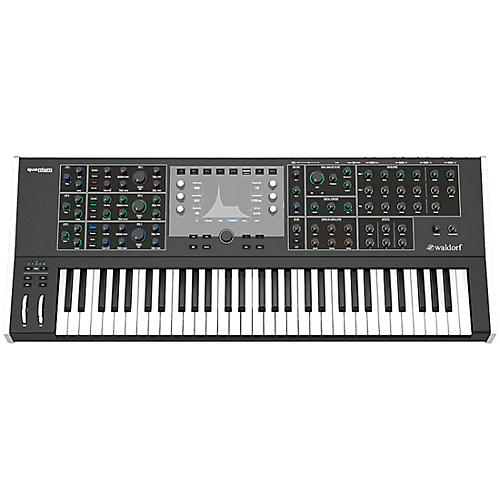 Join For Free
Share your location Order within 7 hrs 48 mins. 12 secs.
In Stock & Ready to Ship Orders placed before 3 p.m. ET usually ship the same business day (except weekends and holidays).
Ship to
Please enter 5 digits
Free Shipping Shipping and Delivery Times If we promise a delivery date and a delivery attempt is not made by this date, we will provide a refund of any shipping fees associated with your order. Questions? Call 800-449-9128
site1skuL00563000000000 true MFI=0 true Change Location

Waldorf's flagship synthesizer, the culmination of decades of development.

Waldorf's Quantum is the next chapter in a long lineage of high-end, groundbreaking synthesis. With special nods to legendary Waldorf synths of the past, plus a highly engineered interface and a whole host of features never before seen on hardware synths, the Quantum is a flagship synth of the future. Starting with Waldorf’s famous wavetable technology developed decades ago, it has always been a challenge to give their instruments a powerful, yet flexible beating heart. Waldorf's digital oscillators coupled with the enormous power and efficient simplicity of gorgeous analog filters started the digital revolution back in the 80’s. Quantum is here to cement its legacy in the pantheon of legendary synthesizers.

Quantum combines the raw power of a classic digital and analog hybrid synthesizers with futuristic sounds that are only possible with today’s intensely programmable soft synths, together in a sleek and accessible user interface designed with the modern synthesist in mind. With a huge, attractive screen, inviting control panel, and top-notch keybed, Quantum is an instant legend in all possible ways.

Digital-Analog Hybrid Architecture
Waldorf’s famed Wavetable oscillator technology forms the basis for the Quantum, descending from legendary synthesizers like the Waldorf Wave. However, Quantum goes beyond what was previously possible with more oscillators, more algorithms, and more ways to modulate them. Combine that with Waldorf’s incredible analog filters, and a hybrid synth like no other is born.

61-Key Fatar TP8 Keybed
With Quantum, only the best components would suffice. That’s why the keybed of choice for Waldorf’s Quantum is the Fatar TP8 synth-weighted keybed. Fatar is known by keyboardists the world over for producing some of the highest quality, nicest feeling, and most durable keybeds on any synthesizer. The TP8 keybed on the Quantum is no exception.

8 Voices, Plus Multitimbrality
Quantum’s eight voices, each with three oscillators and two filters, adds up to a whopping 24 voices and 16 analog filters. Those voices can also be split or layered multitimbrally for even more sound versatility. Quantum has a second pair of audio outputs specifically for use in multitimbral mode. And with Quantum’s wealth of algorithmic oscillator power under the hood, that means sonic possibilities like no synthesizer ever before.

3 Stereo Digital Oscillators Per Voice
Wavetable: Waldorf style with latest additions from Nave including speech synthesis, wavetable generation from audio and new features Waveform: Waveform with up to 8 simultaneous waves per Oscillator in detuned or chordal mode with hard-sync, warp, & PWM Particle: Granular sampler with multi-sampling and traditional sampling mode

Advanced Wavetable Creation
No Waldorf synth would be complete without the Wavetable oscillator technology that Waldorf has become known the world over for. Quantum follows that iconic heritage with not only classic wavetables, but the ability to generate custom wavetables using audio that can either be routed into Quantum’s audio input, or loaded from internal or removable sample memory.

Two Analog Low-Pass Filters Per Voice
Waldorf’s filters are second to none. With both a stand-alone desktop analog filter in the form of the 2-pole desktop module, and a uniquely powerful Eurorack filter module, Quantum’s two analog resonant lowpass filters per voice come from a highly respected progeny, adding up to a whopping 16 total filters, afford users with sonic possibilities completely unheard of when combined with Quantum’s massive modulation routing section, wealth of LFOs, and envelopes.

Superior key controls, Arpeggiator, and Step Sequencer
Quantum provides users with tools to best utilize and expand upon the playability of its keybed, such as an Arpeggiator, on-screen step sequencer, as well as chord play mode with hold and latch.

5 Master Effects
When in multitimbral split or layer mode, both timbres can have separate effects chains applied to them, so that Quantum can provide the maximum breadth of sound design options.

Internal Memory and Expandable SD Slot
Quantum not only comes with four gigabytes of internal flash memory, it also has an SD card slot, which can be used to incorporate an SD card to load and save user wavetables and samples.

Extensive Suite of I/O
With multiple stereo outputs for multiple timbres, as well as headphones, and stereo audio input for recording/creating user wavetables, Quantum offers every possible I/O that users could possibly need to utilize all of its powerful features. Quantum also contains both a USB host and device port, so that it can host external USB MIDI devices and communicate MIDI over USB to a mac or PC.

Experience the future of hybrid synthesis with Quantum!