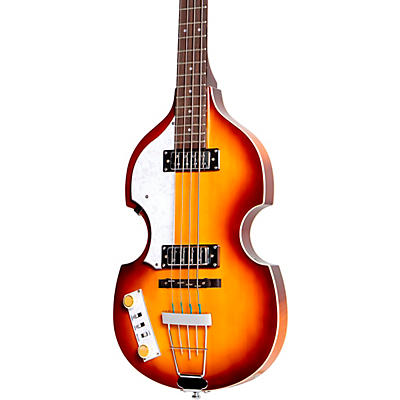 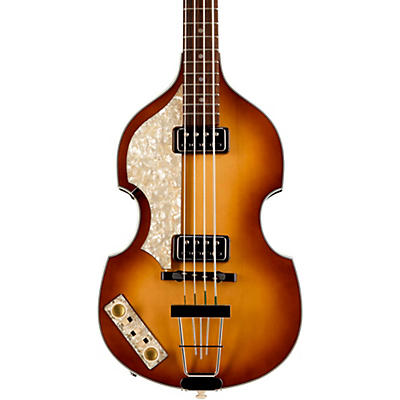 With a history that goes all the way back to 1887, Hofner is a luthier whose success story has been well over a century in the making. Along with the fantastic sound they put out, Hofner's instruments are also known for their variety of shapes, especially the violin-style designs in this lineup of Hofner left handed electric bass guitars. If you recognize the look right away, that's no surprise - after all, it was popularized by Paul McCartney and became an iconic bass style through the 1960s and '70s. Today's Hofner basses have just as much character as their ancestors, and the best part is that with these lefty models available, no one has to miss out just for being a southpaw.

Are you looking for the definitive Hofner to take you back to that golden age of the violin bass? If so, maybe it's time to reserve the Limited Edition 1962 Ed Sullivan Show Left-Handed Electric Bass. It's based on the instrument McCartney played during that legendary performance, delivering an authentic '60s sound and playing feel. The few differences from the original are cosmetic changes made to pay homage to the historic broadcast, including gold hardware and Ed Sullivan Show logos added to the pickguard and behind the headstock. This limited-run, hand-numbered series is limited to 64 instruments, though, so once they're gone, that's it!

If the Ed Sullivan Show model is sold out but you still want a similar bass, check out the Hofner Vintage '62 Violin Left-Handed Electric Bass Guitar. Or maybe you're a beginner wanting to play this iconic style without having to make such a big investment right away? In that case, the Hofner Ignition Series Vintage Violin Left-Handed Bass is the perfect way to get your foot in the door. No matter which Hofner model turns out to be the best fit for your personal needs, there's no doubt you'll be ready to make some amazing music with one of these instruments in your hands.