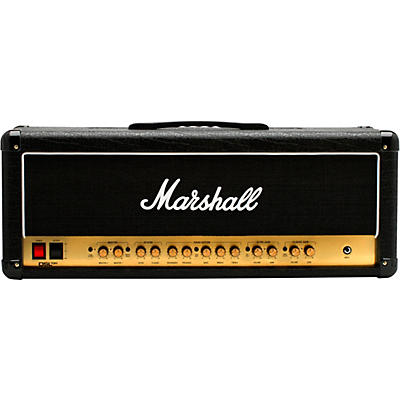 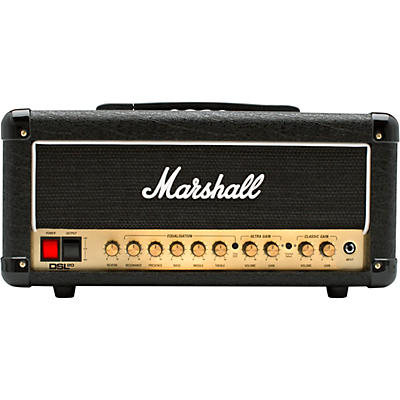 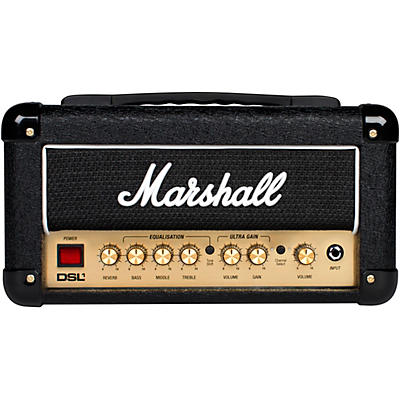 The Marshall DSL, or Dual Super Lead, is a legendary, two-channel workhorse amp series that adorns countless rigs, from venue backlines, rehearsal setups, studio gear and stages for pro-level guitarists the world over. With their undeniably Marshall tube tone that ranges from crystalline on the clean channel to utter filth with a twist of the gain knob on the drive side, they're perfect for a wide range of music styles and needs.

Besides each Marshall DSL model offering a huge breadth of tones via easy-to-use controls, the entire Dual Super Lead series is massively varied. No matter how you use it, there's a DSL to fit your needs and take your tone to the next level. For the studio or bedroom, there's the 1W DSL1CR 1x8 combo and DSL5CR 5W 1x10 combo. For rehearsals and light live work, the Marshall DSL20HR 20W 1x12 combo (or DSL20HR 20W head) will more than get the job done. The all-around-performer DSL40CR 40W 1x12 combo is a self-contained powerhouse that works in any environment. And the heavy-hitter DSL100HR 100W head is ready to tackle the biggest stages night after night.

With the 2018 rendition of the DSL lineup, Marshall took a classic formula of pure British tube tone, two wide-ranging channels, simple controls and high-quality Celestion speakers—and then made some cutting-edge additions to give them even more versatility.

The most notable update to the DSL line is the addition of emulated outputs, courtesy of Softube. Essentially, you can plug into the headphone out or direct output and get incredible, tube-flavored tone while silently recording or practicing. Marshall even modeled the speaker emulation off its industry-standard 1960 4x12 cab to ensure maximum tonal bliss without waking the neighbors. That means you can easily take one of these high-powered, audience-crushing beasts from the stage to the bedroom without losing any tonal quality.

In line with getting maximum performance without incurring the wrath of those around you—the 2018 DSL range also features adjustable power output. That means you can get all the tone and feel of a real Marshall DSL tube amp at output levels you can use at home.

Also added to the Dual Super Lead series in 2018 are independent master volume controls, built-in reverb and resonance controls for both channels (the DSL1 and DSL5 don't have resonance controls). This means you can squeeze even more versatility out of the updated EQ controls to better tailor it to your needs.

Whether you're looking for a first amp, an upgrade, a potent practice machine, a portable gigging/rehearsal amp or a studio beast—the Marshall DSL lineup has something for everyone. With legendary Marshall tube tone, versatile musical range, great features and enough power for any need, it's no wonder why the Dual Super Lead range has become an industry staple—and will continue to be for years to come.

A versatile 40W combo, great for gigging players. The Marshall DSL40C 40W tube combo amplifier is a sturdy, all-tube, gig-ready 40-watt workhorse. It boasts a Celestion 12" speaker and the exact same front and rear panel features as the DSL100H. The Triode (Half Power) option drops the DSL40C's output to 20 watts, making it exceptionally versatile.

A classic sound returns in a package that's perfect for the musician on the go. The Marshall DSL 15C 15W tube combo amplifier boasts two 6V6 power tubes and a Celestion 12" speaker. It's two footswitchable channels - Classic Gain (the DSL100H's Clean option) and Ultra Gain (the DSL100H's Lead 2 option) - share the same, four-way EQ network with controls for Treble, Middle, Bass & Presence. A Mid-Shift button reconfigures the mids when activated and a Deep switch adds extra low-end "girth" if required. The built-in, footswitchable digital reverb is studio quality and a Pentode/Triode switch on the rear panel drops the power to 7.5W. Footswitch included.

The Marshall DSL15H 15W guitar amp head is a no-nonsense, mini-brute. It is identical to the DSL15C except it doesn't feature reverb. It is compact, making it easy easy for the musician on the go. It's an all-tube, 15W head that delivers great tone in a compact "small box" design. Powered by two 6V6 power tubes, with four 12AX7s in the preamp, the DSL15H might be small, but its guts are as serious as its big brother, the DSL100H. With footswitchable classic/ultra gain channels (footswitch supplied), deep switch to boost lower-end chunk, and on the back panel a pentode/triode switch for maximum flexibility (15W to 7.5W), the DSL15H perfectly combines performance, versatility and value for money.