Join For Free
Share your location Order within 7 hrs 48 mins. 12 secs.
In Stock & Ready to Ship Orders placed before 3 p.m. ET usually ship the same business day (except weekends and holidays).
Ship to
Please enter 5 digits
Free Shipping Shipping and Delivery Times If we promise a delivery date and a delivery attempt is not made by this date, we will provide a refund of any shipping fees associated with your order. Questions? Call 800-449-9128
site1skuL72823000000000 true Change Location 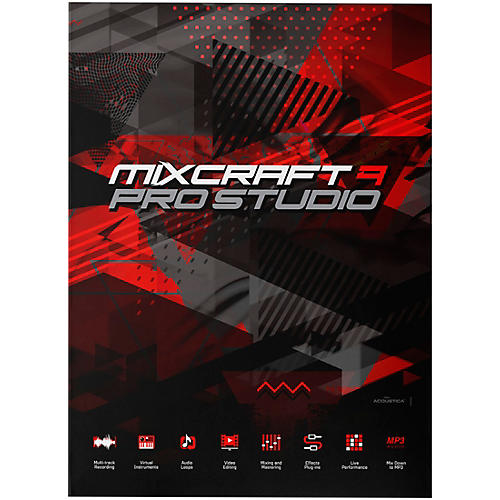 A powerful software tool for pro-level mixing and mastering.

Improvements Everywhere. The first thing you'll notice is Mixcraft 9's modern look. The transport and details panels are all individually undockable and can be placed anywhere around your desktop. The transport can be moved to the top of the software if desired, and the controls can be left-justified, right-justified, or centered.

Automation is tremendously enhanced in Mixcraft 9. In addition to curved automation, Acoustica has added pitch automation to every audio clip and a master tempo envelope for smooth tempo ramps. All effect and virtual instrument parameters are now controllable by tempo-synced LFOs for musical and rhythmic effects.

The new mixer has received a major upgrade with the addition of a number of new panels. The new Gain, Preamp, Compressor, Parametric Equalizer, Spectrum Analyzer, and Oscilloscope mixer panels add utility to an already powerful mixing environment.

MIDI users will find a lot to love. There are improvements to the piano roll, including new tools for drawing MIDI controller automation. The new step recording feature enables rapid creation of mono and polyphonic patterns.
The new Acoustica Vocoder effect is an 11-band analog-style vocoder based on classic hardware. DAW setup of vocoders has traditionally been challenging, but Mixcraft's new Vocoder Tracks automatically configure all instruments, effects, and routing for instant use.

Superior Mastering Tools
Your tracks will reach a new level of audio fidelity with an awesome array of mastering plug-ins. Add a professional sheen with iZotope Mastering Essentials suite. EQ to perfection with TB Parametric EQ or GSXL4070 Parametric, replicating the equalizer section of one of the world’s most coveted mixing consoles. Impart analog tape compression and punch with Ferox Tape Emulator. Create high-energy dance remixes with SideKick6 Side-chaining Compressor.

Put some Mixcraft into your production. Order today.