Join For Free
Share your location Order within 7 hrs 48 mins. 12 secs.
In Stock & Ready to Ship Orders placed before 3 p.m. ET usually ship the same business day (except weekends and holidays).
Ship to
Please enter 5 digits
Free Shipping Shipping and Delivery Times If we promise a delivery date and a delivery attempt is not made by this date, we will provide a refund of any shipping fees associated with your order. Questions? Call 800-449-9128
site1skuL89266000000000 true true Change Location 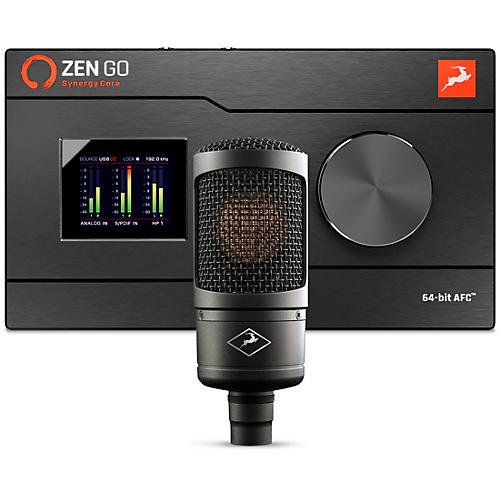 This Zen Go limited-edition bundle from Antelope Audio contains the Zen Go Synergy Core audio interface and the Edge Solo modeling microphone to help you get recording right away.

Edge Solo Modeling Microphone
The Edge Solo mic is a single-capsule large-diaphragm condenser microphone that allows users to emulate 18 of the world's most iconic vintage microphones with uncanny accuracy. The Edge Solo features modeling that was performed in one of the most respected facilities in Germany, using an exquisitely preserved collection of classic mics. Unlike the multi-capsule modeling microphones in the Edge series, Solo features a fixed cardioid pickup pattern and feeds a single mono XLR input channel on your interface. This makes it very easy to use. Simply take it out of its case, plug it in, pick one of the 18 available emulations and start tracking.

Zen Go Synergy Core Audio Interface
The Zen Go Synergy Core is a portable desktop interface that allows self-recording artists to create from virtually anywhere with technology used by award-winning producers. The device’s sound quality and processing capabilities are in a class of their own with Antelope Audio’s renowned 64-bit AFC clocking technology and the powerful, effects-packed Synergy Core onboard platform. The pristine sound is due to a combination of professional-grade AD/DA converters and Discrete ultralinear preamps that share circuits with legendary American and British consoles. The stand-out sonic quality of the device would not be possible without the main pillar of the Antelope Audio sound—the 64-bit AFC clocking technology from the company’s high-end master clocks. It is employed in the most prestigious studios in the world and has been trusted with the scoring of some of Hollywood’s biggest blockbusters.

Zen Go Synergy Core comes with 37 of the finest analog-modeled effects to help create stunning, sonically rich productions. Aside from the exclusive compressors, EQs and preamps, with the interface you get 22 guitar amps and cabs, a guitar tuner and a signature reverb that are ready to be applied in real time to your tracking and mixing session. The Synergy Core effects processing allows you to stack up your chain with many effects instances while monitoring through the interface without fear of overloading. At any time, you can expand your effects collection by purchasing more classic go-to units, true rarities never before recreated in digital form and 3rd-party effects like Antares’ Auto-Tune Synergy.