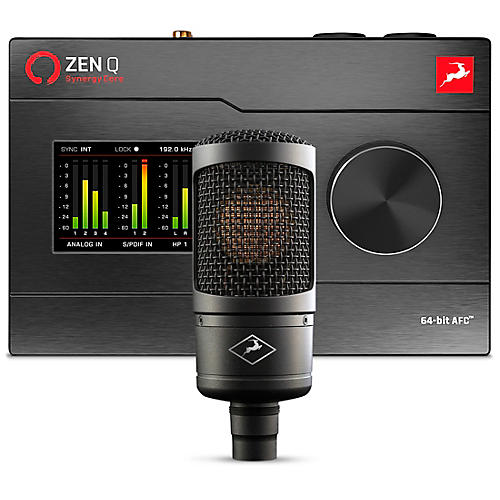 Join For Free
Share your location Order within 7 hrs 48 mins. 12 secs.
In Stock & Ready to Ship Orders placed before 3 p.m. ET usually ship the same business day (except weekends and holidays).
Ship to
Please enter 5 digits
Free Shipping Shipping and Delivery Times If we promise a delivery date and a delivery attempt is not made by this date, we will provide a refund of any shipping fees associated with your order. Questions? Call 800-449-9128
site1skuL89267000000000 true true Change Location

The Zen Q Limited-Edition Bundle from Antelope Audio contains the Zen Q Synergy Core audio interface and the Edge Solo modeling microphone to help you get recording right away.

Edge Solo Modeling Microphone
The Edge Solo mic is a single capsule large-diaphragm condenser microphone that allows users to emulate 18 of the world's most iconic vintage microphones with uncanny accuracy. The Edge Solo features modeling that was performed in one of the most respected facilities in Germany, using an exquisitely preserved collection of classic mikes. Unlike the multi-capsule modeling microphones in the Edge series, Solo features a fixed cardioid pickup pattern and feeds a single mono XLR input channel on your interface. This makes it very easy to use. Simply take it out of its case, plug it in, pick one of the 18 available emulations and start tracking.

The interface is bundled with 37 analog-modeled effects to emulate a studio stocked with the rarest analog gear. The Synergy Core platform grants immersive control of iconic equalizers, dynamic processors, guitar amps, reverb, and more. In addition, over 50 optional expansions are available through Antelope Audio’s Software Store. Versatility is one of the Zen Q’s greatest features, making it the ideal centerpiece for any desktop setup—at home or in the studio. It’s also suitable for on-location recording, traveling musicians or producers who prefer to stay mobile. The Zen Q is completely bus-powered, so a power supply is not required to produce your next big project.