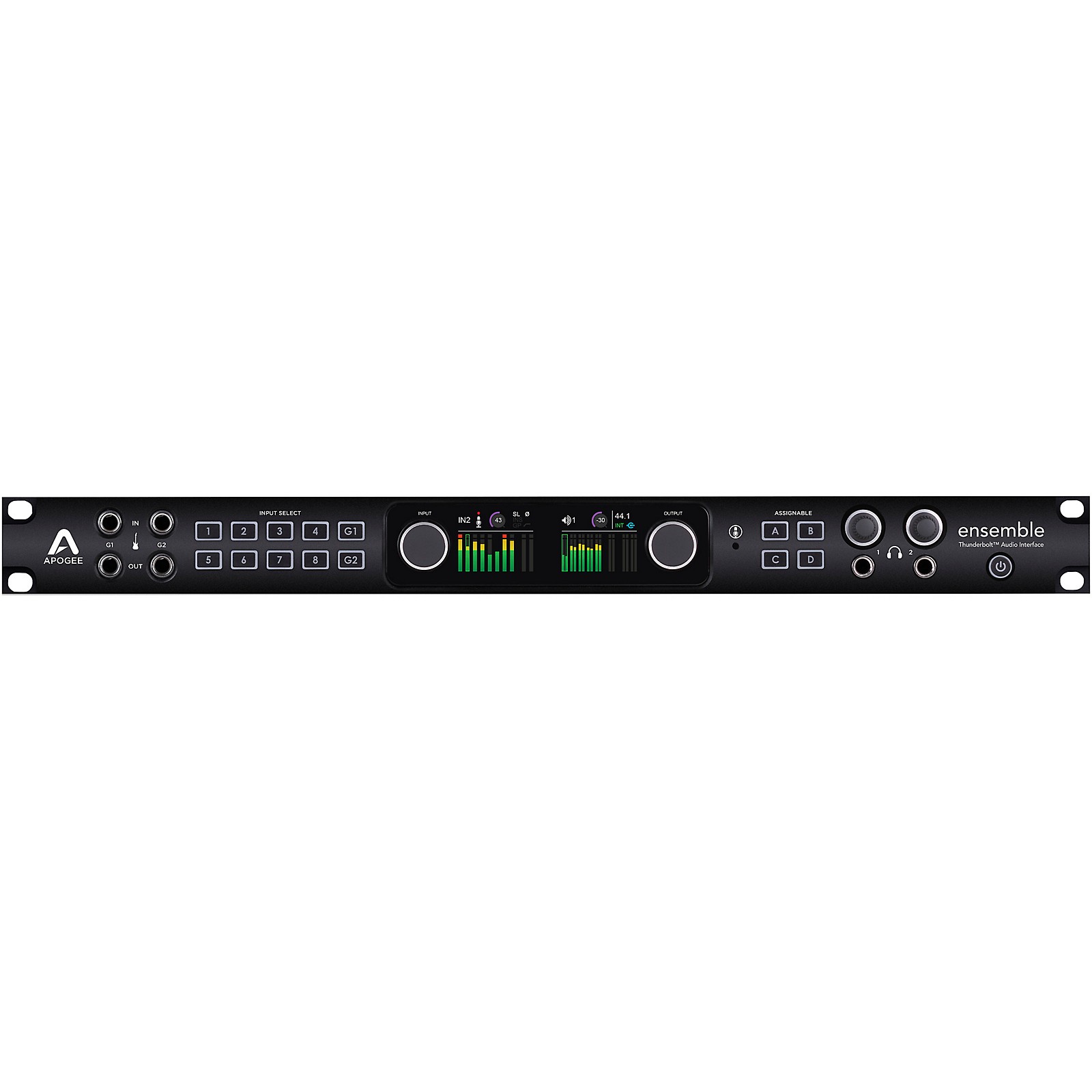 Apogee Ensemble is one of the the first Thunderbolt 2 audio interfaces to offer superior sound quality, the lowest latency performance and the most c...Click To Read More About This Product

Apogee Ensemble is one of the the first Thunderbolt 2 audio interfaces to offer superior sound quality, the lowest latency performance and the most comprehensive studio functionality all in one box. Made for the professional home or commercial studio, Ensemble features legendary Apogee AD/DA conversion, eight Advanced Stepped Gain™ mic preamps, monitor controller functionality including talkback, front panel Guitar I/O, two headphone outputs and digital connectivity for a total of 30 x 34 I/O.

True Thunderbolt Performance
Ensemble delivers the full potential of Thunderbolt 2 performance with the lowest latency, unmatched CPU efficiency, 2 ports for expanding your system and a revolutionary 32-bit playback signal path. Ensemble’s proprietary Thunderbolt driver has been written from the ground up for Mac OS X Mavericks, resulting in unmatched performance and efficiency. Latency has been reduced to an astounding 1.1ms round-trip*, allowing you to monitor through your DAW, plug-ins included, simplifying your workflow and leveraging the power of your Mac. Even when your session’s DSP demands require a higher buffer setting, Ensemble’s ultra-low latency means no longer having to choose between power and speed. *Logic Pro X at 96kHz / 32 buffer setting

Devours Bits, Sips CPU
Ensemble’s custom driver includes two innovative features to maximize the performance of the software-hardware interface: a full 32-bit signal path from the output of your DAW straight to the high-performance ESS DAC, and a revolutionary Direct Memory Access (DMA) engine to more efficiently read and write data directly to Mac memory independent of the Mac CPU.

The DMA engine, running on Ensemble’s hardware logic chip, reads digital audio data directly from your Mac’s memory in a 32-bit format, increasing the driver’s efficiency and providing the highest resolution signal possible to the DAC stage. This implementation allows the driver to crunch an enormous amount of data at an amazing speed, while making a very light demand on your Mac CPU. You benefit with lower latency, more plug-in power, and a transparent and encompassing listening experience.

Soft Limit for Protection from Digital Overs
An Apogee technology first introduced in 1992 on Apogee’s AD-500 converter, Soft Limit can be heard on countless platinum selling records around the world. Once a technology exclusively reserved for Apogee’s most advanced audio converters, Soft Limit is included in Ensemble and can be enabled in Apogee Maestro software.

This superior FET-based analog design prevents the digital clipping that causes distortion by instantaneously rounding off transient peaks before they hit the analog-to-digital converter. Soft Limit allows several more decibels of apparent level to be recorded while subtly providing an analog tape-like warmth to the sound.

8 Analog Inputs
Connect up to 8 microphones or a combination of instruments, external mic preamps, and other analog audio devices.

Built-in Microphone + Talkback
Instantly capture your inspirations, keep an audio archive of the session, or record a “crushed room” sound when tracking drums. Most importantly, the built-in mic may be used for talkback.

2 Analog Inserts
Easily integrate your favorite analog compressor or EQ, in mono or as a stereo pair, into your recording chain with separate ¼” balanced send and return connector for each channel.

FEATURES
Audio Quality Inputs Outputs  Other Connectivity Onboard Features Other