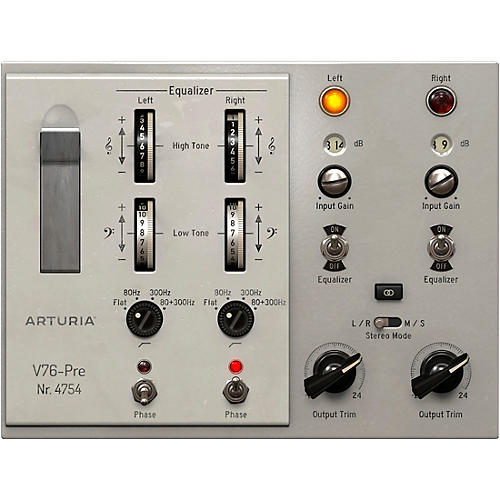 Join For Free
Share your location Order within 7 hrs 48 mins. 12 secs.
In Stock & Ready to Ship Orders placed before 3 p.m. ET usually ship the same business day (except weekends and holidays).
Ship to
Please enter 5 digits
Free Shipping Shipping and Delivery Times If we promise a delivery date and a delivery attempt is not made by this date, we will provide a refund of any shipping fees associated with your order. Questions? Call 800-449-9128
site1skuL77004000000000 true Change Location

An iconic sound of the 60s, now in downloadable form.

The sound that defined 60s pop music, rediscovered as a plugin for your virtual studio. From its broadcast origins to its use on some of the best-selling, most enduring records of all time, the V76 preamp has played a pivotal supporting role in the story of pop music.  In the same way Arturia built its reputation on recreating legendary, rare synths and keyboards through advanced modeling, they used their TAE technology to give everyone the chance to experience that legendary V76 sound. By studying its sound and design, right down to the subtleties of each electronic component, they created a virtual preamp that brings quintessential vintage tone to a whole new generation of musicians.

Vintage sound with today’s technology
North West German Radio were early pioneers of this technology, creating high quality preamps for broadcasting. Enhancing NWGR’s design, Telefunken produced the V72, which later evolved into the studio-focused V76, and became a staple in studios around the world. Fast forward 70 years, and the pro audio industry has changed a little. Superbly transparent, low noise, affordable preamps are included in almost every audio interface. However, the subtle tonal shift that vintage preamps gave to the audio they treated, especially vacuum-tube designs like the V76, are missing today. Arturia has given you the best of both worlds: the ability to color the sound of your modern recorded audio and virtual instruments with the iconic tone of classic studio gear.

Cracking the code
Pro audio equipment doesn’t become legendary without a story to tell. To say the legacy of the Telefunken V series preamp is huge would be an understatement. Arturia didn’t just want to create a carbon copy, but rather give you the best elements of Telefunken’s sonic signature. For example, made the gain controls continuous for more precise control, removed the seldom-used “broadcast utility” 3kHz low-pass switch, and refined the boost and cut range of the V612 EQ, giving you studio tools that are more usable for the modern musician. Thanks to Arturia’s research, modeling, and development teams, you too can include the tone of the fabled V76 preamp and V612 equalizer into your DAW setup.

Hear it for yourself
“The sound behind the sound”, the way the original V76 altered the tone of an incoming signal is difficult to put words to. People use phrases like “warm”, “focused”, and “vibrant” to describe its sound, but to truly understand what the Pre V76 is capable of, you need to hear it for yourself.