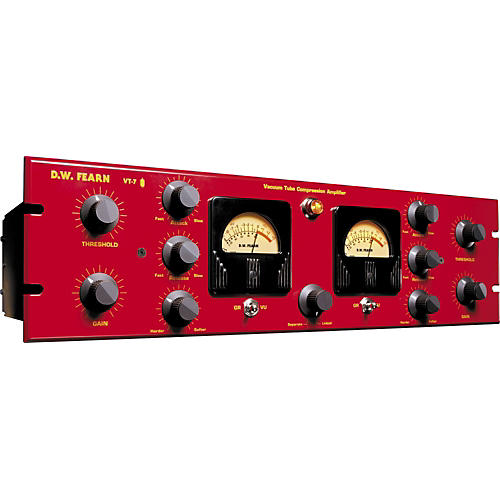 Join For Free
Share your location Order within 7 hrs 48 mins. 12 secs.
In Stock & Ready to Ship Orders placed before 3 p.m. ET usually ship the same business day (except weekends and holidays).
Ship to
Please enter 5 digits
Free Shipping Shipping and Delivery Times If we promise a delivery date and a delivery attempt is not made by this date, we will provide a refund of any shipping fees associated with your order. Questions? Call 800-449-9128
site1sku180292000000000 true MFI=0 true Change Location

Stereo compressor with an all-tube, Class A signal path.

The D.W. Fearn VT-7 Stereo Compressor has an all Class-A vacuum tube audio path, like all Fearn audio products. The gain reduction elements utilize circuitry that duplicates the sound and characteristics of the finest classic vacuum tube compressors, without depending on tubes that are no longer manufactured. The control circuitry is modern solid-state analog. The two channels may be used independently or linked together for stereo. A built in sidechain high-pass filter may be selected to reduce the compression on bass-heavy material.

The VT-7 Compressor has a highly transparent sound, although it can be used more aggressively when needed. Artifacts of the compression process are substantially lower than in most other compressors.

The two channels may be used independently, or linked for stereo. In addition, a third position on the Link switch inserts a high-pass filter (HPF) in the sidechain to reduce the gain-reduction sensitivity of the VT-7 to low frequencies. This is a gentle roll-off, nominally at 100Hz. This allows a bass-heavy mix to have a better frequency balance, and prevents heavy low-frequency audio from modulating the audio level.

The VT-7 is equally adept in tracking as well as a bus compressor. Even jazz and classical tracks can be sent through the VT-7 for some mild gain control without obvious effect other than a significant improvement in the overall sound of the mix.

Like all D.W. Fearn products, the VT-7 stereo compressor is a no-compromise design. From the quarter-inch thick front panel painted with the finest polyurethane finishes to the choice of all components and controls, the VT-7 is built to look as great as it sounds. Fearn build products that last, so they use parts with superior durability and longevity. Fearn products are hand-built by craftsman, one at a time, in the USA.

Important Note: Having many tubes, the VT-7 generates a considerable amount of heat. We highly recommend using D.W. Fearn Vented Rack Panels (#180296) above and below the unit for proper cooling.


History of the VT-7 Compression Amplifier

Compression (or limiting) is sometimes seen as a necessary evil in the recording process. Often it is used to compensate for less than optimum performance or recording technique. However, when used appropriately, there is no question that good-sounding compression can add loudness, power, and improved impact to a recording.

Over many years of recording, I have had the opportunity to use and sometimes own some of the best compressors in the world. For the D.W. Fearn line of products, a compressor was obviously important. I began the search for the ultimate compressor design in 1995 and it wasn't until 2004 that I developed the sound I was looking for.

There are several ways to achieve compression, and all have their advantages and disadvantages. The earliest, and still one of the best, designs uses the characteristic of vacuum tubes that allows their gain to be varied by changing the grid bias. Only certain tube types are appropriate for this (the variable-mu or remote cut-off types), and none are currently being manufactured. Since I want my products to be used for a long, long time, I could not manufacture a product that used tubes that were increasingly rare.

Another excellent approach uses a photoresistor illuminated by a light source to vary the gain of an amplifier. This method was pioneered by Teletronics/Universal Audio in the LA-2. Many LA-2s were built over the years, and more recently there have been several new versions of this classic circuit. The world has a good supply of old and new LA-2-style compressors, and although I did some experimenting with this circuit, I felt that there were enough of them and I didn't need to add another. Also, this design lacks the versatility I thought was necessary.

A more modern approach uses a voltage-controlled amplifier (VCA), which is quite versatile and can combine several additional functions (de-essing, gating, etc.) in one simple unit. However, I was never satisfied with the sound of VCA compressors and did not consider that design for my use.

I experimented with a few off-the-wall approaches, but was not convinced that these designs would really work to my standards.

Another approach, not often used, utilizes a pulse-width modulator to control the duty-cycle of a gain reduction element. This approach has several advantages, including the ability to offer a wide range of adjustment. In the VT-7, a solid-state pulse-width modulator controls a special shunt element in the audio path to control the gain. Since no audio passes through the element, there is no added distortion or other degradation of the sound. That's the simple part. Much more complex is the surrounding circuitry that provides precision control of the element in a way that conforms to what I wanted to hear.

Because the element is well isolated from the vacuum tube circuitry before and after it, the effect on the audio is entirely linear. It does not introduce any measurable distortion. And it passes my test for sonic superiority.

The vacuum tube audio path uses circuitry developed for the D.W. Fearn VT-4 LC Equalizer. In some of the circuit, entirely new designs were needed. The VT-7 uses a combination of 6072A and 6N1P tubes and has the basic sound of all my products.

A look inside the VT-7 reveals a very full box with several densely packed circuit boards for the gain control driver circuitry, interspersed with eight vacuum tubes. Because of the very high frequencies involved in the control circuitry, there are many surface-mount (SMT) components. Thus, the VT-7 is a combination of the latest technology, where needed, with a classic great-sounding vacuum tube audio path.

The VT-7 was designed from the beginning to be a stereo compressor. The two channels can be used separately or linked together for stereo.

So what does the VT-7 sound like? In many respects, it is like the classic vacuum tube compressors with the same musical sound. I have always believed that for most applications the compression characteristics that sound best are those that approximate the natural compression inherent in our hearing. The VT-7 has this kind of natural-sounding compression that sounds just right to me.

** The ultimate test for all my products is this: Would I use it in preference to any other product out there, old or new? The VT-7 passes this test.**

There are not a lot of controls on the VT-7. Basically, there is just a knob to control the amount of compression (Threshold), the amount of gain, the attack and release times, and a knob that smoothly varies the compression characteristic from a "softer" to a "harder" sound. At first, some users may find the controls do not have the range of adjustment that they are used to in more heavy-handed limiters. However, true to philosophy of design in all my products, the VT-7 is intended to take good sound and make it sound great.

Although its effect can be made to sound obvious, I like the way the VT-7 sounds like what a really good engineer would do if he had excellent taste and infinitely fast hands on a fader. In other words, the VT-7 controls the levels without drawing attention to itself. To me, it just sounds right.

Pros who can use anything choose D.W. Fearn for the best possible sound.