*Qualifying purchase (excluding gift certificates) must be one receipt. 6 month special financing excludes open box gear and cannot be combined with promotional coupons or manual discounts. No interest will be charged on the promo purchase if you pay the promo purchase amount in full within the promotional period. If you do not, interest will be charged on the promo purchase from the purchase date. Depending on purchase amount, promotion length and payment allocation, the required minimum monthly payments may or may not pay off the purchase by the end of the promotional period. Regular account terms apply to non-promotional purchases and, after the promotion ends, to the promotional balance. For new accounts: The Purchase APR is 29.99%; Minimum Interest Charge is $2. Existing cardholders should see their credit card agreement for their applicable terms. Subject to credit approval.
More ways to pay:
Loyalty Points Icon
Earn 1,280 reward points
($12.80 in credit)
Earn 1,280 reward pts.
($12.80 in credit)

Join For Free
Share your location Order within 7 hrs 48 mins. 12 secs.
In Stock & Ready to Ship Orders placed before 3 p.m. ET usually ship the same business day (except weekends and holidays).
Ship to
Please enter 5 digits
Free Shipping Shipping and Delivery Times If we promise a delivery date and a delivery attempt is not made by this date, we will provide a refund of any shipping fees associated with your order. Questions? Call 800-449-9128
site1skuL53706000000000 true Change Location 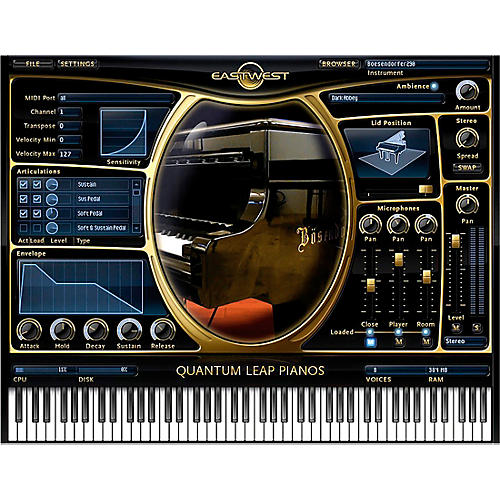 After two years of recording, editing, and programming, EastWest/Quantum Leap proudly present the most detailed collection of the world's finest grand pianos ever recorded in one of the 'temples of sound', EASTWEST STUDIOS (more RIAA certified platinum and gold records awarded than any other recording studios) with 3 mic positions for each piano.

This virtual instrument includes four of the world's finest grand pianos: a Bechstein D-280, Steinway D, Bösendorfer 290, and Yamaha C7. The PLAY interface includes impulses from the same hall the producers used to record Symphonic Orchestra and Symphonic Choirs so the pianos can blend with those collections.
EastWest/Quantum Leap Pianos Gold Edition, which provides only the player's perspective mics and 16-bit samples, is available for users with less powerful systems. A low-cost upgrade path is available for users of the Gold Edition who wish to move up to the Full Edition.

Bechstein 280
The Bechstein 280 is a modern 9-foot, German concert grand piano, built in 2006. This is a very precise, technical piano that creates a fantastic classical sound, particularly for more demanding works. It can also produce a really unique, big, pop/rock piano sound.

A similar Bechstein has been used by Supertramp and many others. The Supertramp Bechstein piano on “Crime Of The Century” was recorded by legendary Engineer/Pro-ducer Ken Scott, and we persuaded Ken to engineer a pop/rock version of this piano for this collection. Producer Doug Rogers purchased the Bechstein in 2006, and when EastWest Studios re-opens to the public in 2008, this will be the EastWest Studio 1 concert grand.

Bösendorfer 290
A 98-key, 9 foot and 6 inch, Grand Imperial Concert Grand piano made in Austria in 2000. This particular piano was played by a Russian concert pianist for 4 years giving it a very warm tone with a huge dynamic range. It stuck out in a room full of world class pianos. It is a very romantic piano and sounds more like a Steinway than a factory tuned Bösendorfer. Producer Nick Phoenix bought the Bösendorfer in 2006, and the sound of this piano coupled with the purchase of EastWest Studios sparked the idea to create this virtual instrument collection.

Steinway D
An 88-key, 9-foot, American Concert Grand. We went through 12 Steinway D’s before finding this gem. This is probably the most balanced universal piano in the collection. The dynamic range is huge, from a whisper to thunder.

Yamaha C7
This instrument is the pop/rock piano from EastWest Studio 2. This particular C7 has been used on more Gold and Platinum records than any other piano in existence. It is a great bright piano, but attention was also paid to the soft dynamics, which really sepa-rates this effort.

Articulations on each piano include: