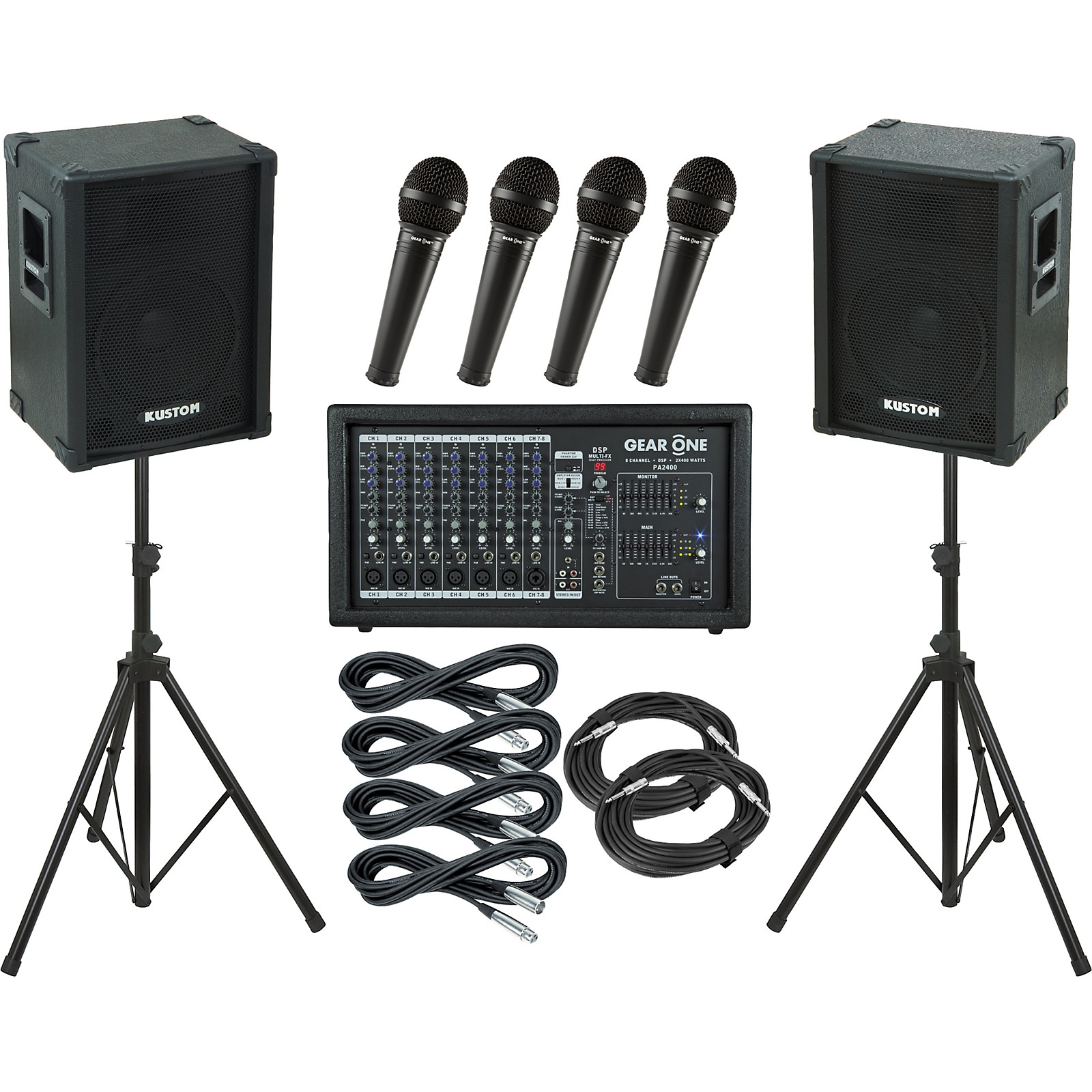 This complete PA package includes a pair of Kustom KPC12 12" Loudspeakers, the Gear One PA2400 8-Channel Mixer, four Gear One MV1000 Dynamic Micropho...Click To Read More About This Product

WARNING: This product can expose you to chemicals including Di(2-ethylhexyl)phthalate (DEHP), Lead and Diisononyl phthalate (DINP), which are known to the State of California to cause cancer, and Bisphenol A (BPA), Di(2-ethylhexyl)phthalate (DEHP) and Lead, which are known to cause birth defects or other reproductive harm. For more information go to www.P65Warnings.ca.gov. Notify Me When This is in Stock
Add to Wish List
Set Alerts
Backstage Pass Icon
Earn Points

PA2400 8-Channel Mixer
The Gear One PA2400 features two 400W amps that can be directed to left/right mains, mains/monitors, or bridged for an 800W mono. Each amp is plenty for powering most 15" two-way speakers. If you need a system with rock band club capability, the PA2400 has plenty of juice to handle the gig.

Each channel is equipped with a three-band EQ and FX/aux level, as well as a pan knob and a monitor level. Another feature of the PA2400 mixer is a pair of seven-band graphics, one for each amp. These make a huge difference because when you use monitors, they often need a completely different EQ profile than the mains. Having a dedicated monitor EQ lets you get more volume out of your monitors while avoiding feedback.

It features 24-bit FX processing with 100 preset selections including combinations of reverb, delay, echo, chorus, flanger, and rotary FX, each with variable parameters. Dialing up a preset couldn't be easier. You simply turn a knob until the preset's number shows in the display, and then press the knob to select it. The PA2400 has separate FX level controls for mains and monitors, and also provides a jack for connecting a footswitch that turns the FX on or off remotely.

Portable and ergonomically designed, with well-placed handles on each end, you won't break your back getting to and from your performance or practice space. The box features a tilt-back panel so when placed on a table, the control panel is at a perfect angle. If you are assembling a system that will let your band rehearse or perform, the PA2400 is a superb solution.

MV1000 Dynamic Microphone
The Gear One MV1000 dynamic, hand-held vocal microphone is ruggedly built with a crisp, clear presence, and cardioid polar pattern for rear isolation and higher gain before feedback. It comes with a carrying pouch, stand adaptor, and a one-year warranty.