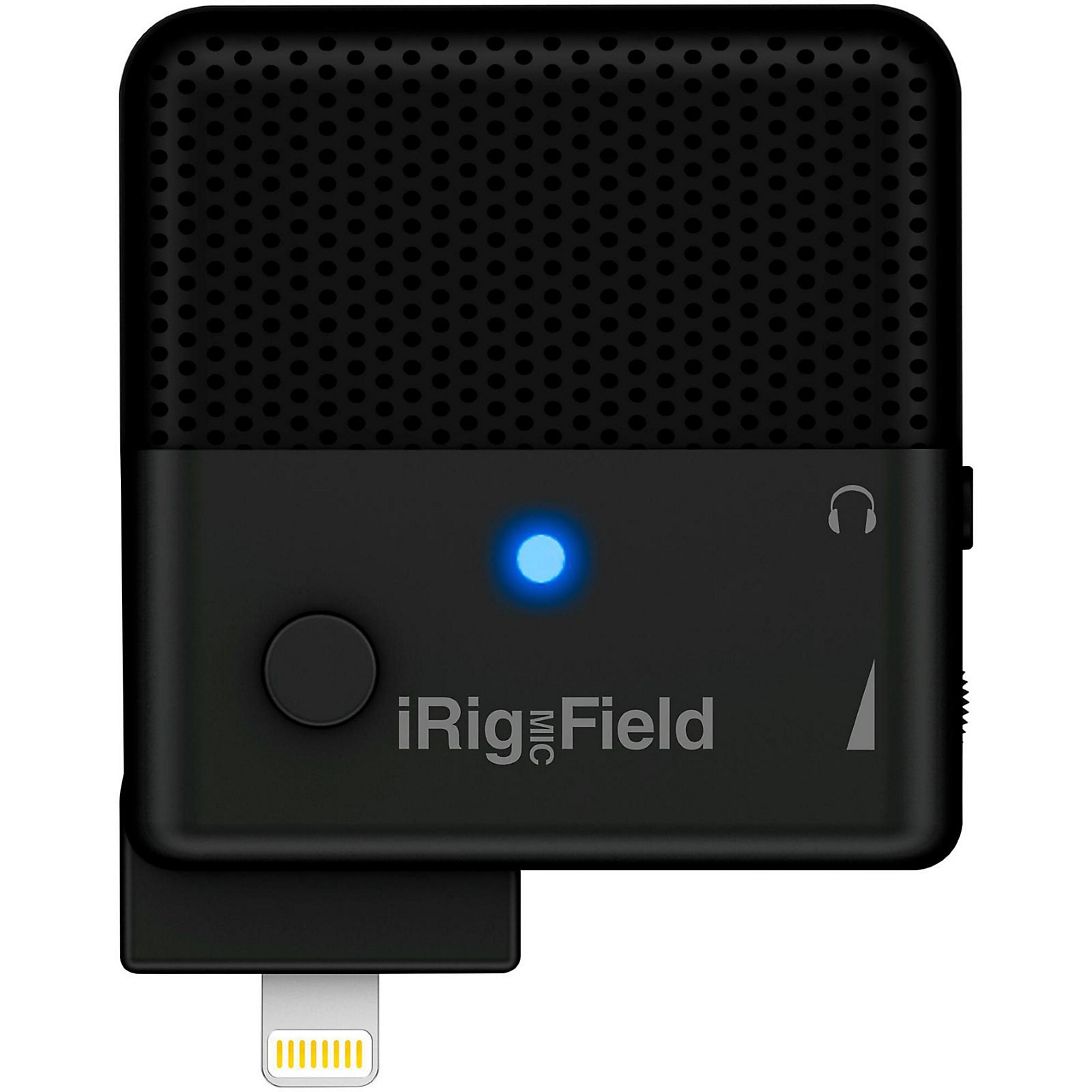 Now anyone can make high-quality stereo recordings while on the move: Introducing iRig Mic Field, the pocket-sized digital stereo microphone for Appl...Click To Read More About This Product

Designed to be used for both video and audio recordings, it features a patent-pending rotatable enclosure that you can easily position for the best stereo image in both landscape and portrait orientations. Now you can capture pristine sound no matter whether you're recording a rehearsal or a concert, capturing audio for videography, acquiring audio for a music project, recording instruments while on the move, saving a lecture or speech or creating your next viral video hit - iRig Mic Field lets you create accurate and faithful field recordings in any imaginable context.

iRig Mic Field's combines high-quality components and unparalleled portability with a unique form factor. iRig Mic Field packs a 24-bit audiophile-grade A/D converter, a 44.1/48 kHz sampling rate, a 115 dB maximum SPL rating and a low-noise/high-definition pre-amp into an enclosure that's small enough to slip easily into your pocket. Now you can get that Hollywood-style stereo sound anytime and anywhere, and you can get it in a mic that's half the price of comparable microphones that cost and weigh twice as much and lack the flexibility of audio and video support.

And with iRig Mic Field you'll be able to record right out of the box thanks to its powerful included iRig Recorder Free app (version 2 is coming soon). It's the easy way to record, edit and process stereo audio while in the field. And as if that wasn't enough, iRig Mic Field is compatible with all Core iOS Audio and Video apps including GarageBand, Voice Memo, Camera and iMovie as well as all your favorite social media video apps and services.

High-quality stereo field recording
When you're on the move and want to record audio and video, you never know when you'll need high-quality stereo sound. That's where iRig Mic Field comes in; it's been designed to deliver the best stereo image and sound quality no matter your needs. It connects directly to the Lightning input of your iPhone, iPad or iPod touch. And its two condenser capsules, 24-bit audiophile-grade A/D converter (with 44.1/48kHz sample rate), 115 dB maximum SPL rating and built in low-noise, high-definition preamp give you the tools you need to capture pristine stereo sound in any situation.

90 degrees of flexibility
When recording in the field, flexibility is key. iRig Mic Field gives you more flexibility than any other mobile field microphone thanks to its conveniently rotatable patent-pending design, which lets you adjust it 90 degrees and lock it in one of two positions for the best stereo image in both landscape and portrait mode. This means you can make higher quality recordings than with the built-in mono microphone on your iPhone, iPad or iPod touch and also comparable mobile microphones that only produce a true stereo sound when held in portrait mode. All of this while all the on-board controls remains easily accessible and properly positioned for maximum comfort.

Incredible portability
Now you have a high-quality microphone that you can take anywhere. iRig Mic Field is as lightweight and portable as it gets. It has a slim form-factor that's as unobtrusive on your device as it is in your pocket. Sounds good, right? Well, it is, but the real revolutionary thing about it is that its pocketability doesn't come at the expense of functionality: Its feature set bests comparable microphones that cost and weight twice as much, and it's been designed to be durable enough to withstand even the toughest of conditions.

Exceptional level control
Capturing good sound requires more than just high-quality components; it also requires comprehensive and easy to use controls. iRig Mic Field has everything you need to ensure your sound is recorded at the perfect setting. It features a thumbwheel gain control, an audio-out jack for quality real-time headphone monitoring (usable with app support) and a multicolor audio input level indicator for quick visual monitoring.

Video production in your pocket
iRig Mic Field has also been designed with mobile video in mind. It lets you record video with crystal-clear audio to be shared on all your favorite video sites and services: Youtube, Facebook, Vine and more. It's never been easier to shoot a video and share it with your friends, followers and fans. Now musicians, videographers, journalists, podcasters, casual users and more can get high-quality sound while on the go without sacrificing mobility or audio fidelity.

Record with the power of apps
For immediate recording, iRig Mic Field comes fully equipped with IK's powerful iRig Recorder (version 2 is coming soon) for iPhone, iPad and iPod touch. The latest version of IK's popular field recording app, it lets you effortlessly record, annotate, edit and process stereo audio with a revamped GUI, 8 new effects and a full suite of newly enhanced social sharing capabilities. iRig Mic Field also works seamlessly with iOS' Core Audio and Core Video apps like GarageBand, Voice Memo, Camera and iMovie. All you have to do is plug in your iRig Mic Field, open your favorite app and hit record: You'll have a high-quality recording in no time.

Big things come in small packages
Combine its effortless portability stereo recording capabilities, 24-bit digital audio converter, plug-and-play app compatibility, built-in preamp, easy monitoring via LED and headphone out, input gain control and sleek design, and iRig Mic Field stands out as the smallest and most full-featured portable field microphone for iPhone, iPad and iPod touch. And best of all, it gives you all this at a low price that everyone can afford.