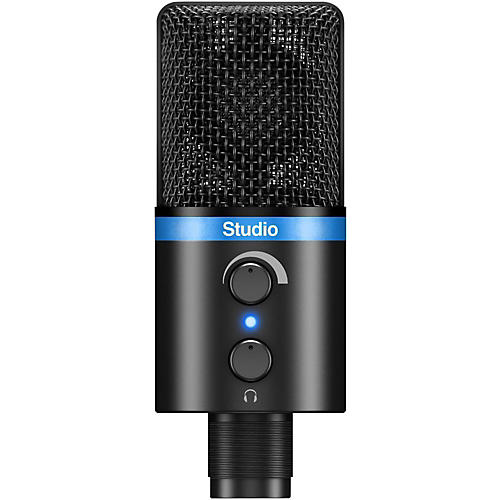 Join For Free
Share your location Order within 7 hrs 48 mins. 12 secs.
In Stock & Ready to Ship Orders placed before 3 p.m. ET usually ship the same business day (except weekends and holidays).
Ship to
Please enter 5 digits
Free Shipping Shipping and Delivery Times If we promise a delivery date and a delivery attempt is not made by this date, we will provide a refund of any shipping fees associated with your order. Questions? Call 800-449-9128
site1skuJ22670000001000 true MFI=2 true Change Location

Introducing iRig Mic Studio, IK Multimedia' ultra-portable large-diaphragm digital condenser microphone for iPhone, iPad, iPod touch, Mac, PC and Android. It packs a 1 diameter condenser capsule into an ultra-compact enclosure that can be used to make professional-quality recordings anywhere. Great for musicians, vocalists, home producers, podcasters, broadcasters, voice-over artists and more, it puts the superior power of a large-diaphragm microphone into the palm of your hand.

Big sound, small size
What' remarkable about iRig Mic Studio is that it offers its truly amazing recording quality in an enclosure that' smaller than an iPhone. It features a large 1 diameter back electret condenser capsule, a 24-bit audiophile-grade A/D converter (with 44.1/48 kHz sample rate) and a built-in low-noise high-definition preamp. These, combined with its 133dB SPL rating, allow for optimal recording at any sound pressure level ” it can capture everything from the subtle and nuanced dynamics of the human voice to the full-on bombast of an amplified electric guitar, and everything in between.

All this is to say that iRig Mic Studio is equipped with everything you need to capture the highest quality sound no matter whether you'e at home in the studio or recording while on the go.

The iRig Mic Studio will go where you go, and record when you want to. Order today!