*Qualifying purchase (excluding gift certificates) must be one receipt. 6 month special financing excludes open box gear and cannot be combined with promotional coupons or manual discounts. No interest will be charged on the promo purchase if you pay the promo purchase amount in full within the promotional period. If you do not, interest will be charged on the promo purchase from the purchase date. Depending on purchase amount, promotion length and payment allocation, the required minimum monthly payments may or may not pay off the purchase by the end of the promotional period. Regular account terms apply to non-promotional purchases and, after the promotion ends, to the promotional balance. For new accounts: The Purchase APR is 29.99%; Minimum Interest Charge is $2. Existing cardholders should see their credit card agreement for their applicable terms. Subject to credit approval.
More ways to pay:
Loyalty Points Icon
Earn 800 reward points
($8.00 in credit)
Earn 800 reward pts.
($8.00 in credit)

Join For Free
Share your location Order within 7 hrs 48 mins. 12 secs.
In Stock & Ready to Ship Orders placed before 3 p.m. ET usually ship the same business day (except weekends and holidays).
Ship to
Please enter 5 digits
Free Shipping Shipping and Delivery Times If we promise a delivery date and a delivery attempt is not made by this date, we will provide a refund of any shipping fees associated with your order. Questions? Call 800-449-9128
site1skuJ16870000000000 true Change Location 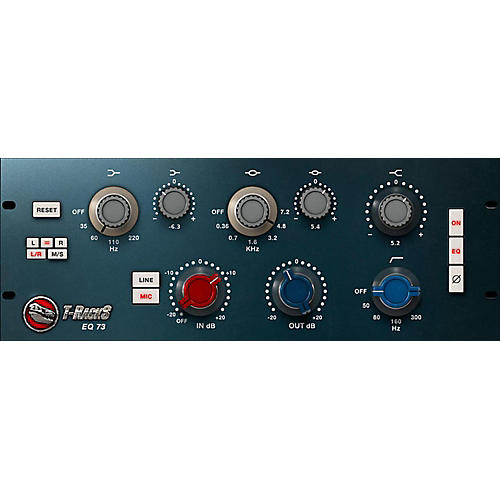 The T-RackS œEQ 73 module is based on one of the most renowned, heavily used, and sought after pieces of hardware in music recording history. Originally part of a large-format British mixing console, this unit was first introduced as a standalone rackmount module in 1970, and quickly became a studio staple. It was favored by recording engineers the world over for its thick class-A sound, rich in harmonics and fullness. On top of its preamp section, it sported a 3-band EQ that was also a key factor in shaping the richness and sound of countless tracks.

The EQ 73 is a œtrue to the original reproduction of the classic œ73 EQ in all of its nuances, thanks to IK Multimedia' extensive development of innovative modeling technologies. Not only have all of the gain stages, circuit designs, and EQ curves and shapes been modeled to perfection but also, unlike many other emulations, the preamp behavior, saturation and preamp/EQ interaction have been brought to the DAW format. No other digital model of this classic EQ offers this key interaction that truly defines why this unit was so special and used. The tone-shaping capabilities don't stop with the wonderfully analog-sounding EQ, the preamp can be used to add œgrit or distortion to tracks, providing a wider sonic palette.

The 3-band EQ is so colorful that it can be used to add character to even the most œsterile and cold of tracks. High-end air and low-end punch can be boosted without ever sounding harsh or boomy, while the so-called œpresence band is an invaluable tool for sculpting the body of a track.

The EQ 73 will sound great on virtually every audio source. Its combination of preamp circuitry and EQ interaction make it versatile enough to enhance any track, especially kicks, snares, overheads, bass, guitars and vocals. It' truly one of those pieces where analog heritage was joined with digital power to form true magic.

Order the EQ 73 for your T-RackS system today!