Join For Free
Share your location Order within 7 hrs 48 mins. 12 secs.
In Stock & Ready to Ship Orders placed before 3 p.m. ET usually ship the same business day (except weekends and holidays).
Ship to
Please enter 5 digits
Free Shipping Shipping and Delivery Times If we promise a delivery date and a delivery attempt is not made by this date, we will provide a refund of any shipping fees associated with your order. Questions? Call 800-449-9128
site1skuJ15074000000000 true Change Location 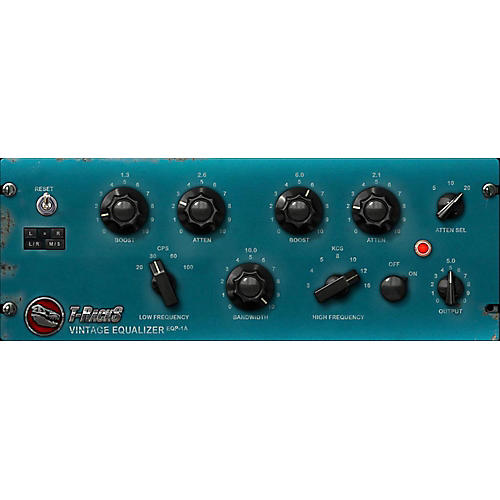 This module is based on what is universally known as one of the best and most musical program EQs ever made, the Pultec EQP-1A. Extremely accurate modeling of two real world units, known to have "the sound", with sonic performance that is indistinguishable from the originals, thanks to IK's DSM and new SCC resulted in this great sounding plug-in.

Released in 1951 the original Pultec EQP-1 was the first program EQ in music history based on passive filter circuits. In this first version though the unit had a weak point caused by its passive filtering circuitry, which was the inherent gain loss. It was then compensated in the following EQP-1A by adding an output makeup gain stage based on 12AU7, 12AX7 and 6X4 tubes, which also contributed to its euphonic and musically rich sound.

The modeled version has that same character and musicality, which is immediately noticeable when performing broad frequency boosts. Closely replicating the frequency centers, boost/cut ranges and filters bandwidth makes it easy to use it for classic EQing techniques it's know for, like the "Pultec EQ Trick".

It was originally designed to be a "program EQ", so it obviously shines in mix bus situations, but it's equally effective for single tracks EQing, like adding low end "whomp" to a kick drum, or adding presence to drums overheads.

Its wide filters bandwidth makes it ideal to give "color" and "air" to a vocal track, where it may be used in conjunction with a sharper Q module (like IK's own Classic T-RackS Equalizer) to cut out unwanted frequencies with more precision.

T-RackS powered plug-ins for your DAW, expand your system today!