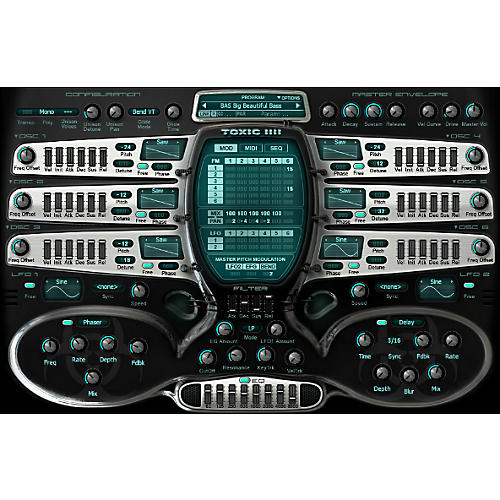 Join For Free
Share your location Order within 7 hrs 48 mins. 12 secs.
In Stock & Ready to Ship Orders placed before 3 p.m. ET usually ship the same business day (except weekends and holidays).
Ship to
Please enter 5 digits
Free Shipping Shipping and Delivery Times If we promise a delivery date and a delivery attempt is not made by this date, we will provide a refund of any shipping fees associated with your order. Questions? Call 800-449-9128
site1skuH89814000000000 true true Change Location

Get a lethal dose of sounds from this 4th generation software synthesizer.

The team at Image Line is known for making some incredible music production software for computer based studios, and they've improved upon their amazing line of Toxic Software Synthesizers. Toxic Biohazard is the 4th generation in that line, and is loaded with the best, and most incredible features of the previous 3 versions, plus lethal enhancements like an optimized sound engine, "physical" envelopes that have real life modeling of sounds with real world decay and resonance, and a pack of new effects like reverb, phaser and more. Toxic Biohazard features a hybrid synthesis engine, combining the best of FM and Subtractive synthesis. With the addition of a warm, analog-modelled filter and set of built-in effects, the Toxic concept remains one of convenience, simplicity, and superb sound quality.

THE FM TECHNOLOGY
Thanks to high-resolution DSP processing, the Frequency Modulation engine produces sound with an extremely low noise threshold; something that most FM engines cannot offer. The Toxic Biohazard sound was built from the ground up, from unique mathematical calculations and analog-modeling techniques.

THE OSCILLATORS
Completely alias free, and well tuned for all sampling rates, they produce a rich, "fat" sound all across the spectrum. Due to the high quality of the anti-aliasing process, you will not encounter the shredding noise on high frequencies that has plagued FM synthesis in the past. Furthermore, the oscillators are calculated at extremely high speeds, keeping your CPU usage to a minimum. Toxic's low CPU consumption gives you plenty of room for external processing and running multiple instances. The oscillators also come equipped with Maxx Claster's own powerful spectrum analysis technology. This allows you to create your own waveforms, via the simple process of loading a WAV or AIFF format sound file. All of these features make the oscillators very flexible, and allow for use of both synthetic and acoustic waveforms within Toxic. Each oscillator also comes with 32 built in ˜classic' waveforms, each shown to be the most useful in FM synthesis.

THE EFFECTS
Made to assure high quality and flexibility are built into the synthesizer itself, Toxic Biohazard aims to reduce the need for external processing altogether. The effect modules are designed to give the user access to several types of effects, from aggressive, tube-like distortion, to warm stereo delay, reverb, flanger, and phaser effects. With Image Line's own pro-quality tape delay emulation, based on non-fixed delay buffer sizes, instead of the usual methods incorporated within digital delays, this delay line gives you warm sound, with "true" feedback and modulation. Lastly, the signal chain features an analog-modeled, parametric equalizer to further shape your sound. The EQ provides access to crisp, clear high-end definition, creamy mid ranges and earth-shaking low-end frequencies. The Toxic Biohazard effect module expands its palette of sound to include everything from dark, atmospheric textures to razor sharp leads, fit to slice easily through any mix.

THE FILTER
Maxx Claster's own analog-modeled, multimode filter is reminiscent of a certain silver box of old. Garnishing a warm, resonant Low-Pass mode, a smooth Band-Pass setting, and a creamy High-Pass mode, Toxic Biohazard gives a wealth of control over tone. The filter is further enhanced by modulation via a dedicated envelope generator and low frequency oscillator, as well as responding to velocity information and keyboard tracking. These features allow for extreme sound shaping, as well as subtle nuances attributed to dynamic playing.

THE SEQUENCER
Powerful, yet simple, the sequencer offers a total of 64 steps, which can be divided into two independent, 32 step modules to allow double-polyphonic patterns. Using Image Line's "Smart Sequencer" technology, when a chord is played, the module defines that chord, and tunes the pattern accordingly. The sequencer also allows for pure playback of the programmed sequence from single notes. Simply holding one chord can virtually create an arrangement for you.

Give your tracks a toxic touch. Order today.