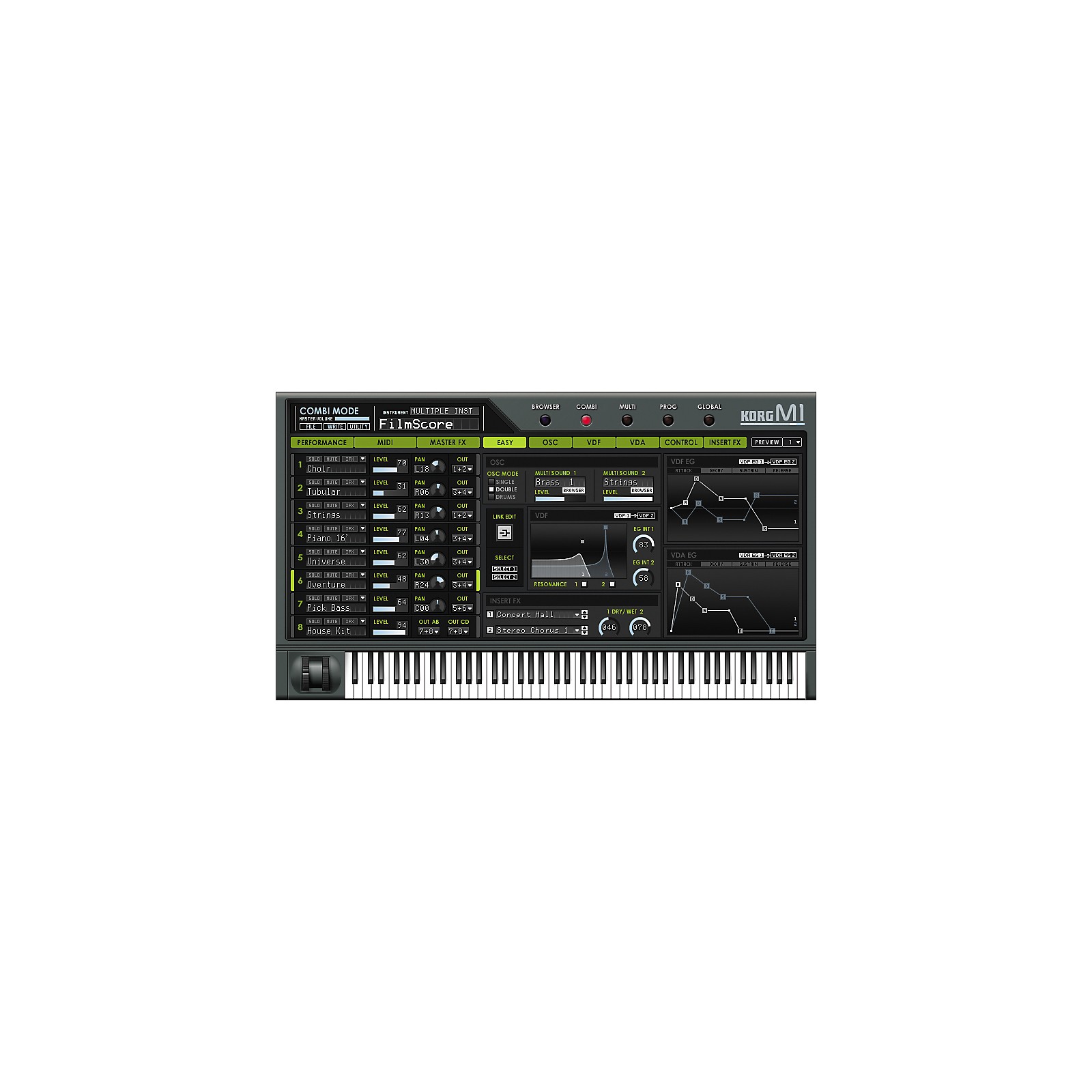 M1 Software Synthesizer
This definitive software version of the classic M1, replicates the Korg synthesizer that established the PCM synth sound.
As the first workstation synthesizer, the M1 was a major element in the sound of the late '80s through early '90s. The M1's AI (Advanced Integrated) synthesis system used PCM waveforms and digital effects to deliver polished, production-ready Program and Combination sounds. Although today's high bit-rate and high sample-rate sound libraries deliver greatly improved audio quality, it is difficult to find sounds with real character, sounds that can't be described purely in terms of specifications”sounds that are available only from the M1.

Overflowing With Sounds
The M1 software synthesizer provides all of the PCM, Program, and Combination data found in the original M1 and the M1EX internal PCM expansion, plus the PCM data and Program/Combination data from all 19 optional ROM cards.
In addition, it contains new PCM Drum, Program and Combination data that are ideal for contemporary music production. With a total of more than 2,700 preset sounds, this is truly the ultimate M1. Of course, original M1 series data can also be imported as SysEx (SYX) files, opening up a universe of sounds to be found around the world.

New Features For Flexible Sound Creation
The M1 software synthesizer provides numerous new functions that were often requested for the original M1. At the top of the list is a rich resonant filter, along with VDA modulation and a compressor effect. While the original M1 had two effect processors, this new software incarnation boasts two insert effects for each of the eight multi-timbral parts, as well as two master effects, for even greater sound processing capabilities.

User Interface Designed For Easy Operation
Taking advantage of the computer's display, the M1 software synthesizer features a completely redesigned interface that emphasizes ease of operation. Many parameters can be seen at once, and certain parameters can be displayed graphically. Ease of use has been a primary consideration at every point”for example, the Combination mode and Multi mode have been designed to be completely independent.
The new browser and search functions group sounds together based on instrument type and tonal character, making it quick and easy to find the right sound for any project. Once a sound has been selected, the Easy Edit page or the Performance page can be used to quickly tweak the sound so that it perfectly matches your needs.

WAVESTATION Software Synthesizer Version 1.5
The WAVESTATION appeared in 1990 offering its new Advanced Vector Synthesis System, which allowed combining and shifting between multiple complex waveforms.
The WAVESTATION achieved worldwide honors and featured two radical innovations that opened up a revolutionary new world of sound that is still very much in demand. One was the ability to mix or morph between four oscillators to create new and unique sounds and textures, controlled from a vector joystick or a cyclic envelope. The second innovation was Wave Sequencing, which allowed the playback of different waveforms in a specific order to create evolving soundscapes, and unique rhythmic or melodic sequence patterns.

In 2004, the Korg Legacy Collection introduced the WAVESTATION software synthesizer. All of the WAVESTATION and WAVESTATION-SR factory data”550 Performances, 385 Patches, 484 PCM waveforms, 55 types of effects”was included in this original release.