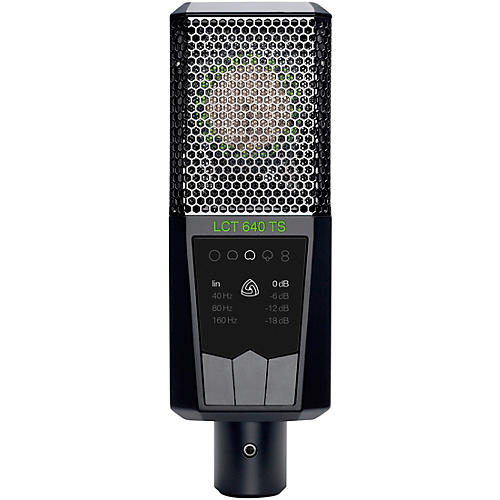 Join For Free
Share your location Order within 7 hrs 48 mins. 12 secs.
In Stock & Ready to Ship Orders placed before 3 p.m. ET usually ship the same business day (except weekends and holidays).
Ship to
Please enter 5 digits
Free Shipping Shipping and Delivery Times If we promise a delivery date and a delivery attempt is not made by this date, we will provide a refund of any shipping fees associated with your order. Questions? Call 800-449-9128
site1skuJ46405000001000 true MFI=1 true Change Location

Revolutionary Dual Output Mode
The LCT 640 TS transmits the signal of the front and the back capsule independent of one another. In addition to your standard XLR cable plug is the included mini 3-pin XLR. Use both outputs to capture the whole session instead of committing to a single source. You can change the material you have already recorded dynamically by adjusting the polar pattern, adding or subtracting room, and even turning your microphone by 180°. Or, after recording with the LCT 640 TS, use Lewitt’s plug-in to change the pattern, then jump back in and tweak your material.

Magnetic Pop Filter
This efficient magnetic pop filter will effectively reduce pops and hisses without covering 2/3 of your vocal artists face. This makes it easier to read music, lyric sheets, and also to communicate by gesture with the engineer.

MS Stereo with one LCT 640 TS?
Definitely. Usually, mid side stereophony can only be done with two microphones. But now you can use one LCT 640 TS. Just point the side of the microphone to the signal source and record both outputs on a stereo track in your DAW. Change the panorama for both signals to adjust the stereo width.

Any two LCT 640 TS will always form a matched pair. Add another one and you will get a "matched triplet," and so on. Every single LCT 640 TS undergoes a series of measurements followed by adjustment of the polarization voltage to achieve exactly the same sensitivity in every microphone. Not only that, we all know how easy it is to miss clipping instances that occur during recording. Clipping History lets you know if the microphone has clipped since it was last turned on.

Change the polar-pattern - even after the recording
Set to Dual Output Mode the signal of the mics front and back diaphragm is provided by independent circuitries, any kind of polar pattern can be realized dynamically - even after the recording. Already recorded material can be changed dynamically by adjusting the polar pattern - room sound can be added or decreased, even a turn by 180° is possible. After recording with the LCT 640 TS you can use LEWITT’s Polarizer plug-in to tweak the material with incredible ease of use.

The Dual Output Mode lets you record Mid Side stereo with only one LCT 640 TS - usually only possible with two microphones. Clipping History, 4 low-cut and pre-attenuation settings round off the outstanding feature list of the LCT 640 TS. The LCT 640 TS opens doors to a new world of recording techniques.