Join For Free
Share your location Order within 7 hrs 48 mins. 12 secs.
In Stock & Ready to Ship Orders placed before 3 p.m. ET usually ship the same business day (except weekends and holidays).
Ship to
Please enter 5 digits
Free Shipping Shipping and Delivery Times If we promise a delivery date and a delivery attempt is not made by this date, we will provide a refund of any shipping fees associated with your order. Questions? Call 800-449-9128
site1sku502388000000000 true MFI=0 true Change Location 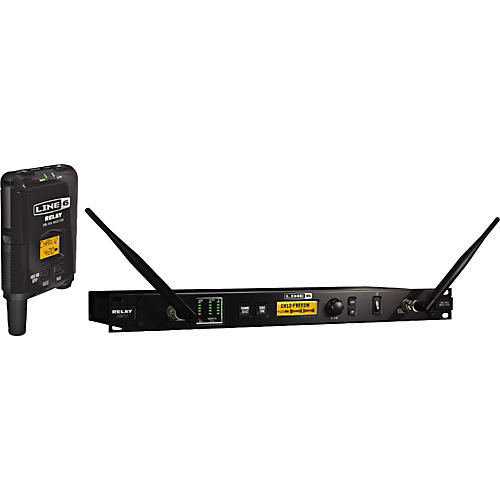 A lightweight, low-profile wireless system that provides guitarists with 300 feet of freedom.

The Line 6 Relay G90 digital wireless system provides a pure signal so guitars get a beautiful high-end sparkle and basses get a thunderous low-end punch, even at distances of up to 300 feet. The signal's clarity rivals that of the highest-quality guitar cables. Unlike traditional wireless systems, this system offers superior sound with full bandwidth and zero compression.

Not only does the Relay G90 wireless system sounds just you're using a direct cable, but it can also sound just like the cable you would normally use. It features EQ settings to match the frequency response of your guitar cable so you can switch between the Relay G90 and your cable without having to change the settings on your sound amp. Different players use different cables, but all players can use Line 6 Relay G90.

Professional Dependability
The Relay G90 wireless mic system broadcasts its robust signal over the 2.4GHz band. This keeps the signal free from many kinds of interference. For added security, it employs exclusive signal protection technology. Each of its channels broadcasts an encrypted data over four different frequencies simultaneously. Traditional wireless mic systems, on the other hand, broadcast over congested UHF bands, so their signals can be susceptible to interference generated as far away as 100 miles or more.

Refreshing Simplicity
The Relay G90 is easy to use. Bright LCDs and LEDs on the transmitter and receiver display all critical system functions including power, status, channel number, battery life, and more. Plus, it finds open channels right out of the box.