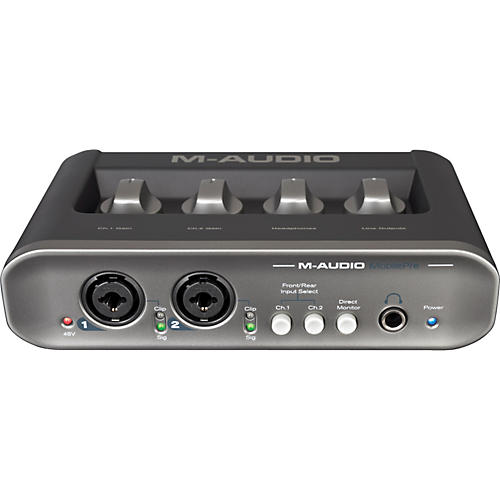 The next generation of the best-selling MoblePre USB.

The next-generation MobilePre delivers even more pro features than its best-selling predecessor, so you can record a wider variety of sources with higher audio quality. Connect guitars, microphones, keyboards, drum machines, synths, and other devices, and simultaneously record two sources with 24-bit/48 kHz (better-than-CD) sound. Thanks to the ergonomic design, you can control input gain and volume with convenient top-panel knobs, and monitor your recording without latency at the press of a button.

Make music like the pros
The included Pro Tools SE music recording and creation software delivers many of the same powerful features that studio professionals use to create Grammy Award-winning albums, Emmy Award-winning television shows, and Academy Award-winning films. This easy-to-use software lets you create music with up to 24 tracks, and also includes a huge loop library and over 100 virtual instruments to build out your mixes. Add EQ, reverb, and other built-in effects to make your music sound professionally produced.

Universal compatibility
If you want even more tracks, effects, virtual instruments, and loops, MobilePre is compatible with Pro Tools M-Powered software”the same recording platform used by studio professionals around the world. You can also use MobilePre with GarageBand, Logic, Live, Record, and virtually every other popular music application.

Record Your Guitar
Want to record guitar with your computer? What about bass or keyboards? MobilePre can make your dream a reality. Simply connect it via USB to your PC or Mac, plug in your instruments, and you're good to go. You can also use the included Pro Tools SE recording software and effects to layer tracks with your instruments and create professional-sounding mixes.

Record vocals and acoustic instruments
MobilePre features switchable +48V phantom power, so you can connect a studio-grade condenser (powered) microphone like the M-Audio Nova for pro-quality recordings. The interface's two-input, two-output design lets you record a vocal mic and another instrument simultaneously, so you can capture song ideas or collaborate with other musicians.

Monitor without distracting latency
All digital audio recording systems introduce a small delay between the instrument input and the output coming from the computer. This "latency" can be distracting enough to cause pitch and timing errors when you're recording. MobilePre solves this latency problem with a direct monitor button, which lets you hear your instruments directly through the interface before they go into the computer.