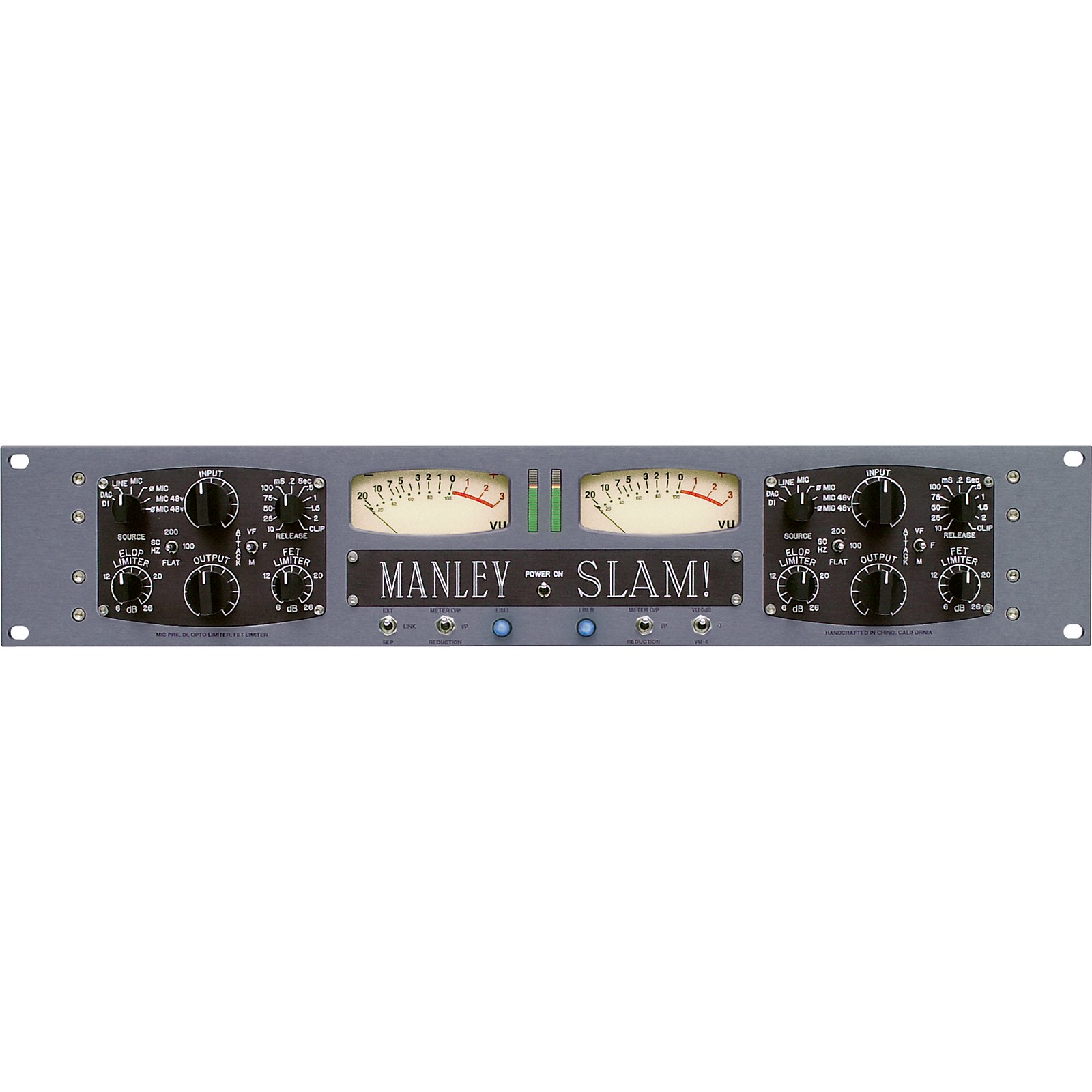 SLAM! stands for "Stereo Limiter and Micpre" and it pretty much describes what it will do to most VU meters. Manley had to put a switch on this limit...Click To Read More About This Product

A studio processor that lets you dial in how clean or crunchy, or punchy, and as loud and proud you want it.

SLAM! stands for "Stereo Limiter and Micpre" and it pretty much describes what it will do to most VU meters. Manley had to put a switch on this limiter to drop its internal VU meters down 3 & 6dB to keep the poor little needles from bending-it'll get LOUD fast (hence the exclamation mark). And on top of being an amazing pair of (actually four) Limiters, and Class A tube mic preamps, it also has masters degrees in DI, AtoD and DtoA, VU and PPM but that was too much for an acronym.

When it comes to classic gear, especially classic limiters, we can all agree numbers like LA2s, 1176s, 2264s, and others come to mind. What if all those sounds were to be found in one stereo tube unit. Interested? Manley combined their favorite Electro-Optical circuit (ELOP) with a fast FET based brick-wall limiter reminiscent of some cool classics. Manley added a sidechain filter that can remove low frequencies that makes it more useful for a variety of tasks, while retaining that easy, "it just works" quality that has made it a favorite for vocals everywhere. The FET-based limiter has different desirable characteristics that both optimizes the signal for digital recording, due to the brick-wall capability, and lets you dial in how clean or crunchy, or punchy, and how loud and proud you want it.

Get in: The Manley SLAM! starts with tube mic preamps on both channels with switchable phantom power and phase reverse. Manley provided plenty of gain for you in this tube circuit, up to 60dB with 20dB more in the limiter-plenty for soft singers using low output ribbon mics. The input attenuator is right up front, like a variable pad so your loud rock 'n' rollers won't cause a problem either. Track direct with the Direct Instrument input or bring your line level inputs into the Manley SLAM! for processing.

Get it LOUD¦ two different and distinct limiters per channel:
The ELOP Limiter: Manley's beloved Electro-Optical Levelling Amplifier circuit, the ELOP, still the favorite for vocal tracking, shows up here with its switchable side-chain high pass filter making it much more useful for mixes and other tracks as well. One of the most appreciated aspects of Manley's original ELOP is the simplicity of a two knob limiter, which is optimum for demanding pro recording pressures. You can still grab two knobs and have complete control of level and dynamics and be ready to hit that record button. Intuitive controls and a straight ahead signal path through quality components simply works.

The FET LIMITER: Here's a fast FET based "brick wall" limiter that spans the range of clean predictable limiting to the grunge and gravel that other FET-based limiters only dream of achieving. The FET RELEASE control allows you to dial up a variety of colors. There is even a "CLIP" setting that provides as round a shape as has ever been available. (Read more below about the CLIP settings.) Manley aimed at "sound" first, then experimented with circuits until the folks at Manley heard what they wanted discovering fresh approaches that provide a very wide range of useful dynamic control. For example, you can set up for a fast brick wall limiter with slower releases for minimum artifacts, or go with the faster releases to get some crunch and then get extreme loudness. The Attack control is unusual too providing the sonic control common with its historic brothers but very unusually retaining the zero overshoot "none-shall-pass" brick wall that defines a real limiter. And it's punchy! As the saying goes, "Louder is better." The SLAM! optimizes levels to analog to digital converters with ballz, warmth and loudness verging on silly or just clean and safe.

What is especially nifty is the ability to use the ELOP and FET limiters together at the same time dialing in whatever amounts of each effect you like. Every limiter has its own character or sound and here Manley has combined two powerful world-class tools that can be uniquely blended and mixed to taste and purpose. Even the metering is appropriate for each limiter so you can easily see how each is contributing.

Metering on the Manley SLAM! is exceptional. The signal processor's two full-size real VU meters show you the raw input levels, the final output levels, and the ELOP Limiter gain reduction in the traditionally preferred format for visually displaying apparent loudness. VU's are cool. Noticing how mastering engineers often need a switchable pad on their VU's because the "optimized" levels tend to pin the needles in the red, the SLAM! VU's also have a 0, -3dB, -6dB switch to help with this situation. There are also very fast and super accurate multi-color LED ladder peak meters that display the input and output levels and the FET gain reduction, and some combinations. They will do Peak, Peak Hold timed, and Peak Hold until reset, and also allow you to manually set where the individual bars change colors to match your other gear. With maximum clean I/O levels of +30 dBu, it is a lot more likely you will use these meters to see what's clipping downstream. It probably won't be the Manley tube line drivers inside!

The back panel should keep everybody happy. All the usual XLR's for transformer balanced I/O and ¼" phone jacks for direct unbalanced I/O. There are four TRS jacks for inserting external EQ into the sidechains and another connector for linking multiple units for surround. It's all here.

The Manley SLAM! also seems a natural as an audio mastering tool. The FET limiter works great on mixes, and the ELOP now has a high pass filter switch that is spot-on for mastering. Manley offers a mastering version, which eliminates the mic preamps, adds detented controls replacing the pots, and provides extra metering options. Manley compressors and EQs seem to be the most popular pieces of gear ever when it comes to mastering. The ultimate analog rack for the final important touches to the mix would have included the SLAM!, The Variable Mu and The Massive Passive. Combine this with some digital processors of similar caliber and one has a respectable and very effective set of mastering tools. That Manley rack plus some Manley microphones would make an ultimate stereo recording chain too. Recording equipment you'll want to keep for a lifetime.

Have it your way! Order it today.