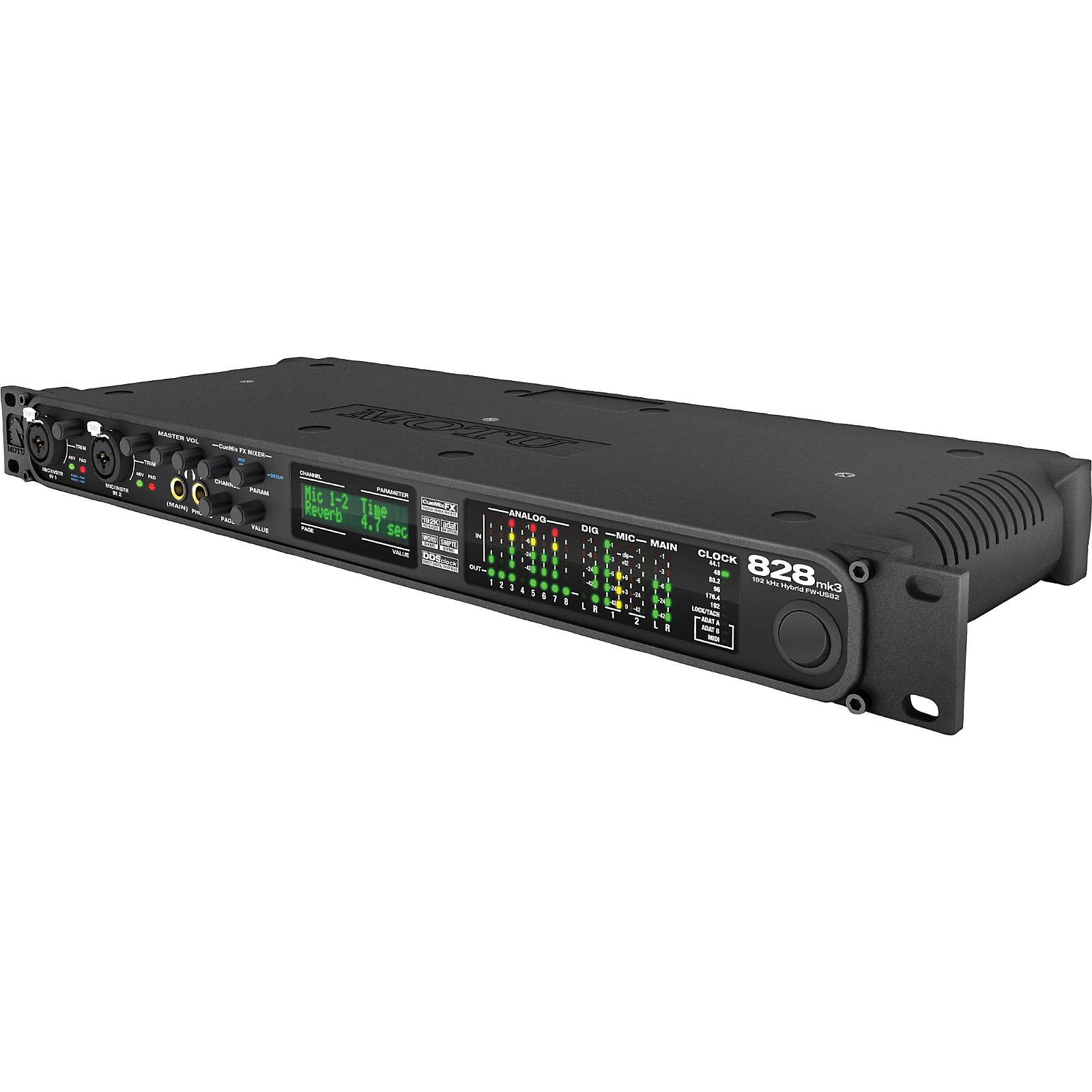 As a hybrid audio interface, the 828mk3 provides flexible connectivity to any Mac or PC via FireWire or high-speed USB 2.0, with 10 channels of prist...Click To Read More About This Product

As a hybrid audio interface, the 828mk3 provides flexible connectivity to any Mac or PC via FireWire or high-speed USB 2.0, with 10 channels of pristine 192kHz analog recording and playback, combined with sixteen channels of ADAT digital I/O and stereo S/PDIF. Expand your system by connecting additional MOTU audio interfaces or the 8pre mic input expander.

Tons of I/O
The 828mk3 is equally well-suited for studio and stage, with or without a computer. As an interface or standalone mixer, the 828mk3 provides 28 separate inputs and 30 separate outputs, including dedicated main outs on XLRs and two front panel headphone outs.

On-board digital mixer with effects for monitoring and live mixing
Connect all of your studio gear, including microphones, guitars, synths, keyboards, drum machines and even effects processors. Record, monitor, route and process all of these live inputs using the professional on-board CueMix FX digital mixer-with no latency and no processor strain on your computer. Apply hardware DSP-driven compression, EQ, and reverb to every input and output, independent of your host computer. When recording from the mic/guitar inputs, the 828mk3's signal overload protection gives you an extra 12dB of headroom above zero with no digital clipping or harsh artifacts.

Standalone operation as a mixer
After programming the on-board mixing in the studio, unplug the 828mk3 from the computer and take it on the road for operation as a Standalone mixer with effects. All mixing and effects parameters are adjustable using the front panel backlit LCD.

Across-the-board compatibility
The 828mk3 provides cross-platform compatibility with Mac and Windows and all of your favorite audio software and host-based effects via WDM/ASIO/Core Audio drivers. Or you can use the included AudioDesk workstation software for Mac, with 24-bit recording/editing and 32-bit mixing/processing/mastering.

Continue below for more in-depth descriptions of the main features

The 828mk3 is an advanced "hybrid" audio interface offering both FireWire and high-speed USB 2.0 connectivity
FireWire has long been recognized as a reliable, high-performance connectivity standard for professional audio interfaces like the 828mk3. Meanwhile, high-speed USB 2.0 has also developed into a widely adopted standard for connecting peripheral devices to personal computers.

To fully support both formats, the 828mk3 hybrid audio interface is equipped with FireWire jacks and a high-speed USB 2.0 (480MB/sec) connector, and you can use either port to connect the 828mk3 to your computer. This gives you maximum flexibility and compatibility with today's ever-expanding universe of Mac and Windows computers.

If your computer does not have a FireWire port, then obviously you will need to connect the 828mk3 to one of its high-speed USB 2.0 ports. However, if your computer has both FireWire and USB2, then it is your choice, and your decision will depend mostly on other peripherals you may also have.

Mic/guitar inputs
Two convenient front panel mic/guitar inputs are equipped with high-quality preamps, plus overload protection and all the features you need to record any mic or guitar with excellent sound quality. Each input is equipped with its own 48V phantom power switch and 20 dB pad switch. Both inputs also include a switch that toggles between the low-impedance XLR mic input and the true high-impedance 1/4" guitar input jack.

Precision digitally controlled analog trim
The preamps provide 53dB of gain, which you can adjust in precise 1dB increments using the detented digital rotary encoder. As you turn the encoder, you see graphic and numeric feedback in the front panel LCD, so you know exactly how much gain you are applying. The gain adjustment itself is smooth because it is analog, but the digital control gives you both precision and the ability to save and recall trim settings. You get the best of both worlds: analog trim with digital precision and control.

Precision digitally controlled analog trim is also available on all of the 828mk3's balanced 1/4" (TRS) analog inputs on the rear panel. Level matching analog inputs has never been easier or more convenient. You can carefully tune the balance among your analog inputs using the CueMix FX software and then save the entire configuration on disk for instant recall. You can create and save as many trim configurations as you need.

Soft Clip
Additional protection can be applied to the mic/guitar inputs by enabling the 828mk3's Soft Clip feature, which engages just before clipping occurs and helps reduce perceptible distortion.

Sends
Each mic input has a corresponding rear panel send that allows you to insert outboard gear before the signal goes digital. Any input can be used as a return.

Front panel I/O
In addition to the two mic/guitar preamp inputs on the front panel, the 828mk3 provides two independent headphone jacks with independent volume knobs, one of which also controls the XLR main outs on the rear panel. Alternatively, this "Master Vol" knob can be programmed to control any combination of outputs (analog and/or digital). For example, it can control monitor output for an entire 5.1 or 7.1 surround mix.

Discrete inputs and outputs
The phone jack below the MASTER VOL knob labeled "(MAIN)" is hard-wired to (mirrors) the XLR main outs. In all other cases, inputs and outputs are discrete. For example, using a mic input does not steal an input from the TRS analog I/O bank. Even the second headphone jack operates as an independent output with its own volume control, although you can program it to mirror any other output pair (such as the XLR main outs).

Digitally controlled analog input trim
All of the 828mk3's analog inputs are equipped with digitally controlled analog trim controls that allow adjustments in precise 1dB increments. The mic/guitar input trims can be adjusted using front-panel digital rotary encoders that provide feedback in the front panel LCD. All analog inputs, including 8 TRS analog inputs, can be trimmed using the CueMix FX control software for Mac and Windows. This allows you to fine-tune your trim settings for synths, effects modules, and a wide variety of analog inputs for optimum levels. Different trim configurations can then be saved as files on disk for instant recall.

Rear panel I/O
8 balanced (TRS) 24-bit analog inputs and outputs, as well as two XLR main outs and the two preamp inputs, can operate at sample rates up to 192kHz (a total of 10 analog inputs and outputs). Two optical banks provide 16 channels of ADAT optical at 48kHz, 8 channels of S/MUX optical I/O at 96kHz or two banks of stereo TOSLink at rates up to 96kHz. The banks operate independently, allowing you to mix and match any optical formats. RCA S/PDIF connectors also supply independent stereo digital I/O. Each mic input has a corresponding rear panel send that allows you to insert outboard gear before the signal goes digital. Any input can be used as a return.

Control room monitoring
Powered monitors can be plugged directly into the outputs of the 828mk3 and you can attenuate the output from the software or the front-panel MASTER VOL control. Main out volume is not limited to stereo operation: quad, 5.1, 7.1 and even user-defined configurations are available. You can even program the 828mk3 to control all 30 outputs with the MASTER VOL knob.

Mixing and effects
The 828mk3 is really two devices in one: an audio interface plus a 28 x 16 digital mixer. In fact, you could even think of the 828mk3 as a digital mixer in a single rack-space form factor.

Operating as either a computer interface or stand-alone, the 828mk3 provides DSP-driven digital mixing with effects processing (reverb, EQ and compression) for all 28 inputs. You can connect all your gear and then mix, process, and monitor everything from the 828mk3's main outs or headphone jacks.

A 28-input-by-16-bus digital mixer with effects
All I/O is routed to the on-board 16-bus (8 stereo) digital mixer driven by hardware-based DSP with 32-bit floating point precision. The mixer allows you to apply no-latency effects processing to inputs, outputs, or busses directly in the 828mk3 hardware, independent of the computer. Effects can be applied when the 828mk3 is operating stand-alone (without a computer) as a complete rack-mounted mixer. Input signals to the computer can be recorded wet, dry, or dry with a wet monitor mix (for musicians during recording, for example).

Complete mixing at your fingertips
All of the mixer settings in the 828mk3 are accessible from the programmable front-panel backlit LCD. You can also launch the CueMix FX control software for Mac OS X and Windows 7/Vista/XP. CueMix FX provides complete on-screen access to the 828mk3's on-board, hardware-based mixing environment.

CueMix FX software
CueMix FX gives you comprehensive graphic control over your mix. CueMix FX is a completely new software front-end with attractive graphic mixing, graphic editing of parametric EQ, and a convenient tabbed interface for quick access to all mixing features, digitally controlled trims, and other settings in your MOTU audio interface.

CueMix FX can be operated side by side with any host audio software for Mac or Windows, and it can be controlled from the Mackie Control Universal Pro automated worksurface.

One window with convenient tabs
Three separate tabs show inputs, mix busses, and outputs. Click the "Focus" button on any channel or bus to edit its settings in the area on the right-hand side, which provides separate tabs for graphic editing of parametric EQ, compression, and other effects. Each channel strip displays a graphic thumbnail of EQ curves, compressor settings, and other channel-specific parameters. There is also a section for talkback and listenback.

Eight stereo buses
Your MOTU audio interface supports up to 8 separate stereo mixes (seven for the UltraLite-mk3) assigned to any digital or analog output pairs. For example, you could set up separate monitor mixes for the main outs and headphone outs, while two additional stereo buses could be used for send/return loops to reverb units or other outboard gear. Each mix can support all inputs (analog and digital).

DSP resources for mixing and effects

Order the 828mk3 to get 10 analog channels and 16 channels of ADAT digital I/O and stereo S/PDIF, and more.