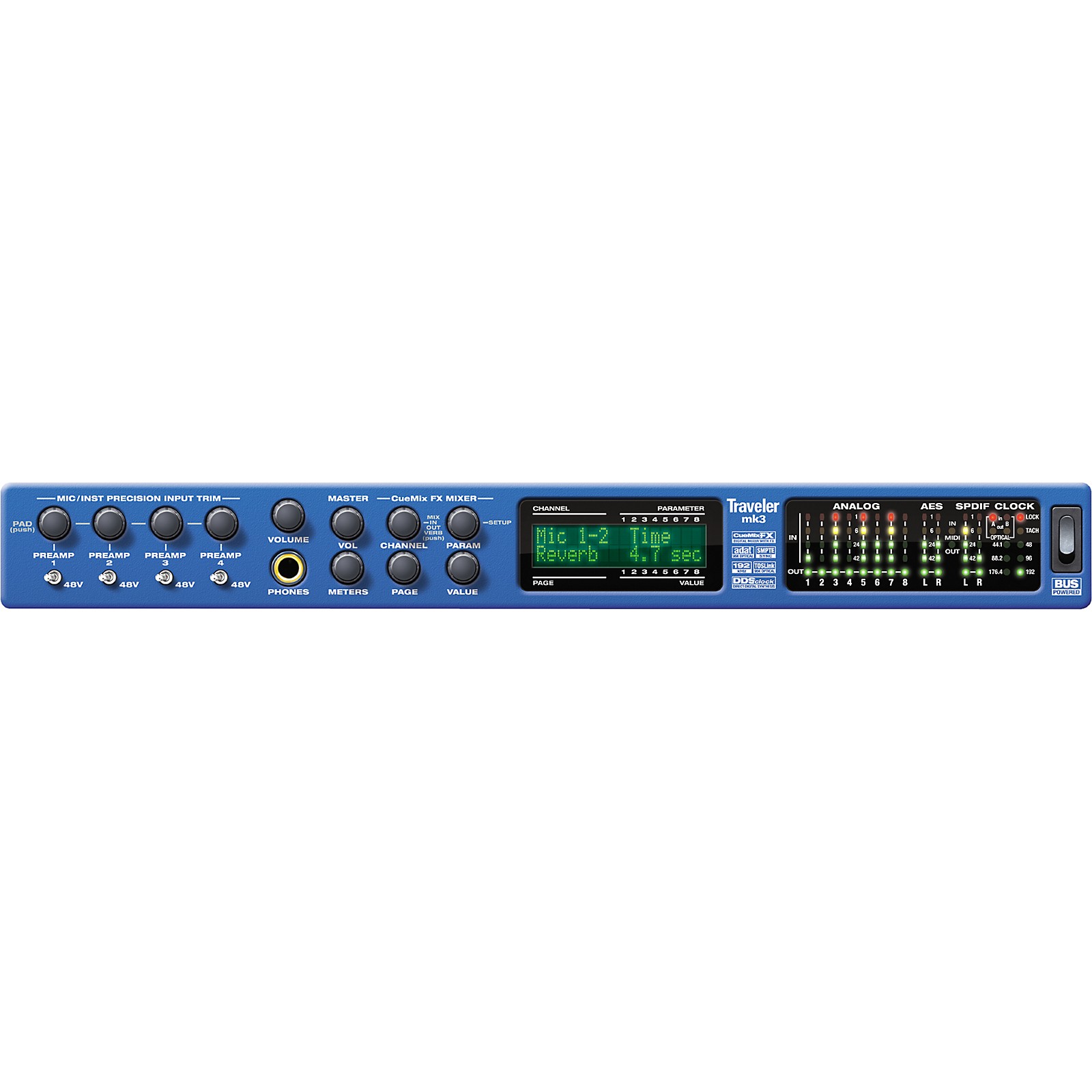 The MOTU Traveler-mk3 is equally suited for studio, stage, and remote locations, with or without a computer. As an interface or standalone mixer, the Traveler-mk3 provides 28 separate inputs and 30 separate outputs, including 4 XLR/1/4" combo mic/instrument analog inputs equipped with pre-amps, individual 48V phantom power switches, and Digital Precision Trim controls conveniently adjusted from the front panel or via the included CueMix FX software.

This handy interface makes it possible to connect all of your audio instruments and gear, including mics, guitars, synths, keyboards, drum machines, and even effects processors. Record, monitor, route, and process all of these live inputs using the professional on-board CueMix FX digital mixer with no latency and no processor strain on your computer. Apply hardware DSP-driven effects processing to inputs, outputs, and busses independent of your host computer.

The Traveler-mk3 audio interface lets you add Classic Reverb with lengths up to 60 seconds. Further sculpt your sound with its 7-band parametric EQ featuring filter types carefully modeled after British analog console EQs. Choose between two forms of compression: a conventional compressor, and the Leveler, an accurate model of the legendary LA-2A optical compressor that provides vintage, musical automatic gain control. When recording from the 4 mic/guitar inputs, the Traveler-mk3's signal overload protection gives you an extra 12dB of headroom above zero with no clipping or harsh artifacts.

After programming the on-board mixing in the studio, unplug the MOTU Traveler-mk3, remove the rack brackets, and take it on the road for operation as a portable, bus-powered audio interface for a laptop, or battery-operated standalone mixer with effects. The Traveler slides easily into your backpack and fits neatly beneath a laptop. All mixing and effects parameters are adjustable using the front panel backlit LCD. Record extended sessions even in the most remote locations with the complete freedom of field battery power.

The Traveler-mk3 interface provides cross-platform compatibility with Mac and Windows and all of your favorite audio software and host-based effects via WDM/ASIO/Core Audio drivers. You can also use the included AudioDesk workstation software for Mac, with 24-bit recording/editing and 32-bit mixing/processing/mastering.

At home or on the road, the Traveler-mk3 makes high-quality recording a reality. Order now.