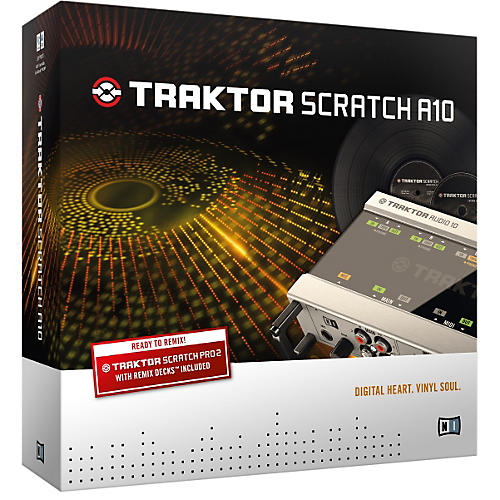 Use your classic turntables or CD decks to play new digital tracks while maintaining the familiar DJ layout and feel you're used to. Who says you have to give up what you love to stay current? Native Instruments' flagship Digital Vinyl System (DVS) gives you the power to move into the future and keep your precious vinyl or CD collection alive. Whether you're a turntablist or old school house head, TRAKTOR SCRATCH A10 lets you update your set with fresh, new music while you keep on mixing and scratching the way you always have.

Professional Digital Vinyl System
TRAKTOR SCRATCH A10 lets you spin digital files on four track decks using super-tight vinyl and CD control. The next generation of the award-winning digital vinyl system is easier to use than ever, and boasts incredible connectivity via the included TRAKTOR AUDIO 10 USB interface.

This professional DJ system includes the extremely powerful TRAKTOR SCRATCH PRO 2.5 software with Remix Decks - the latest version of the advanced flagship DJ software. Switch any track deck to a Remix Deck and seamlessly merge the worlds of DJing and live performance.

TRAKTOR PRO 2.5
TRAKTOR PRO software is world-renowned by top DJs of all genres for its rock-solid four-deck operation, and its straightforward usability - it gets you mixing straight out the box. Now the latest TRAKTOR PRO 2.5 version seamlessly merges the world of DJing and live performance via the innovative Remix Decks. Building on the feature set of the previous version - TRAKTOR PRO 2.5 pushes the boundaries of creativity yet again.

Remix Decks allow for spectacular live remixing and improvisation. Switch any (or all) regular track decks in TRAKTOR to a Remix Deck, and you have access to a powerful loop suite made up of 64 slots- build and save your own Remix Set and add to it later.

Thanks to Auto Detection and configuration for NI audio interfaces, you can get set up in seconds, while TRAKTOR AUDIO 10's Direct Thru function makes switching DJs in the club a breeze. The SoftSync feature adds a new level of tempo-awareness to TRAKTOR SCRATCH that expands your mixing options when using vinyl control. TRAKTOR SCRATCH A10 also features an intuitive software interface and TruWave frequency-specific colored waveforms for easy identification of song structure.

Native Scratch Technology
The newly developed Native Scratch technology features TRAKTOR SCRATCH MK2 timecode vinyl and CD control for the next step in tight timecode performance. Spin super-precise 2kHz control signal on 120g vinyl - it feels just like your digital track was cut to a 12-inch - and with the innovative vinyl marker stickers you get clear visual reference at all times. Alternatively, use your CDJs with TRAKTOR MK2 timecode in relative mode, and stay ahead of the competition - use TRAKTOR's loops and hot cues and your CDJs' cue and manual looping functionality, and get the best out of both systems.

Designed for Traktor Pro with STEMS
The latest version of Traktor Pro Software is STEMS ready. A Stem file is an open, multi-channel audio file that contains a track split into four musical elements – bass, drums, vocals, and melody for example. With each element available independently, you can mix in ways that just weren’t possible until now. With Stems fully supported by the included flagship TRAKTOR software, each of these TRAKTOR controllers are pre-mapped and designed for playing with Stems right out of the box. You can get mixing with Stems right away with a 1.5 GB package of free Stems tracks. Derived from selected MASCHINE expansions, these 65 Stems tracks cover a wide range of tempos and genres ranging from techno, house, and funk, to trap, drum and bass, dubstep and more.

Scratch that digital itch and order your system today.