Join For Free
Share your location Order within 7 hrs 48 mins. 12 secs.
In Stock & Ready to Ship Orders placed before 3 p.m. ET usually ship the same business day (except weekends and holidays).
Ship to
Please enter 5 digits
Free Shipping Shipping and Delivery Times If we promise a delivery date and a delivery attempt is not made by this date, we will provide a refund of any shipping fees associated with your order. Questions? Call 800-449-9128
site1sku500390000000000 true MFI=1 true Change Location 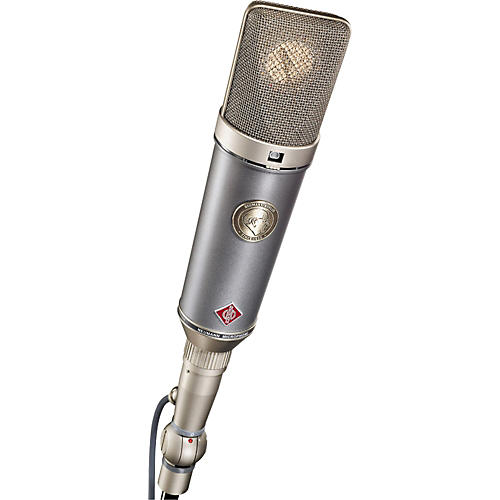 A classic remade for the sound of a new generation.

The letters TLM stand for transformerless microphone. In the Neumann TLM 67 mic, an electronic circuit is used rather than a conventional output transformer. Like a transformer, the circuit ensures good common mode rejection, effectively suppressing interference signals that affect the balanced modulation line. The TLM 67 microphone can operate at sound pressure levels of up to 105 dB without distortion, and has a dynamic range of 94 dB (A-weighted), without the use of the pre-attenuation switch.

The Neumann TLM 67 is an extremely versatile microphone. Its 3 switchable directional modes (omnidirectional, cardioid and figure-8), selectable 10 dB pre-attenuation and high-pass filter permit detailed adjustments, depending on your recording needs.

In the world of studio microphones, the numbers 47, 67 and 87 have associations that inspire enthusiasm among professionals. The classic Neumann U 67 was the successor to the famed U 47, which was Sir George Martin's favorite mic for recording the Beatles, and the U 87 has become the most used vocal mic in recording history. It is no coincidence that the name of the new Neumann TLM 67 microphone contains the number 67. In many respects, the Neumann TLM 67 mic is based on the workhorse mic of the 1960s: the legendary Neumann U 67 mic. Like the U 67, the Neumann TLM 67 incorporates Neumann's K 67 capsule. In addition, the special new circuit design closely reproduces the sound characteristics of the classic U 67 mic, without the use of tubes.

The legendary and frequently imitated design of the Neumann U 67 was the first to be developed by Neumann employees in collaboration with the famous German designer, Wilhelm Braun-Feldweg. The design of the Neumann TLM 67 microphone represents a contemporary development of that of the U 67, transferring its positive impact to the present era. The enhanced exterior design thus links past and future microphone design trends.

On the occasion of its 80th anniversary, the Neumann company is honoring its founder, Georg Neumann, with a badge on the front of the TLM 67 microphone. The distinctive Neumann attraction is conveyed in every detail of the microphone.

Due to its extensive control features, the TLM 67 is suitable for a wide range of applications. In addition to its primary role as a vocal microphone for all types of music and spoken voice, in orchestral recordings the TLM 67 can be used as a main microphone and as a spot microphone for individual instruments.

The microphone is addressed from the side on which the Neumann logo is located.

A large wire mesh grille encloses the elastically mounted double diaphragm capsule. The directional characteristics omnidirectional, cardioid or figure-8 can be selected via a switch below the grille. The selected setting is indicated by a symbol shown in a window above the switch.

Elastic mounting of the capsule supplies protection from the transmission of structure-borne noise. If required, the EA 87 elastic suspension and WS 87 windscreen are available as accessories, for further suppression of structure-borne and wind noise. The PS 15 or PS 20 a popscreen can be used if the microphone is to be addressed at close range.

The classic Neumann U 67 was the successor to the famed U 47, which was Sir George Martin's favorite mic for recording the Beatles. The TLM 67 brings that sound into the modern age — and to your recordings, after you've ordered your TLM 67.