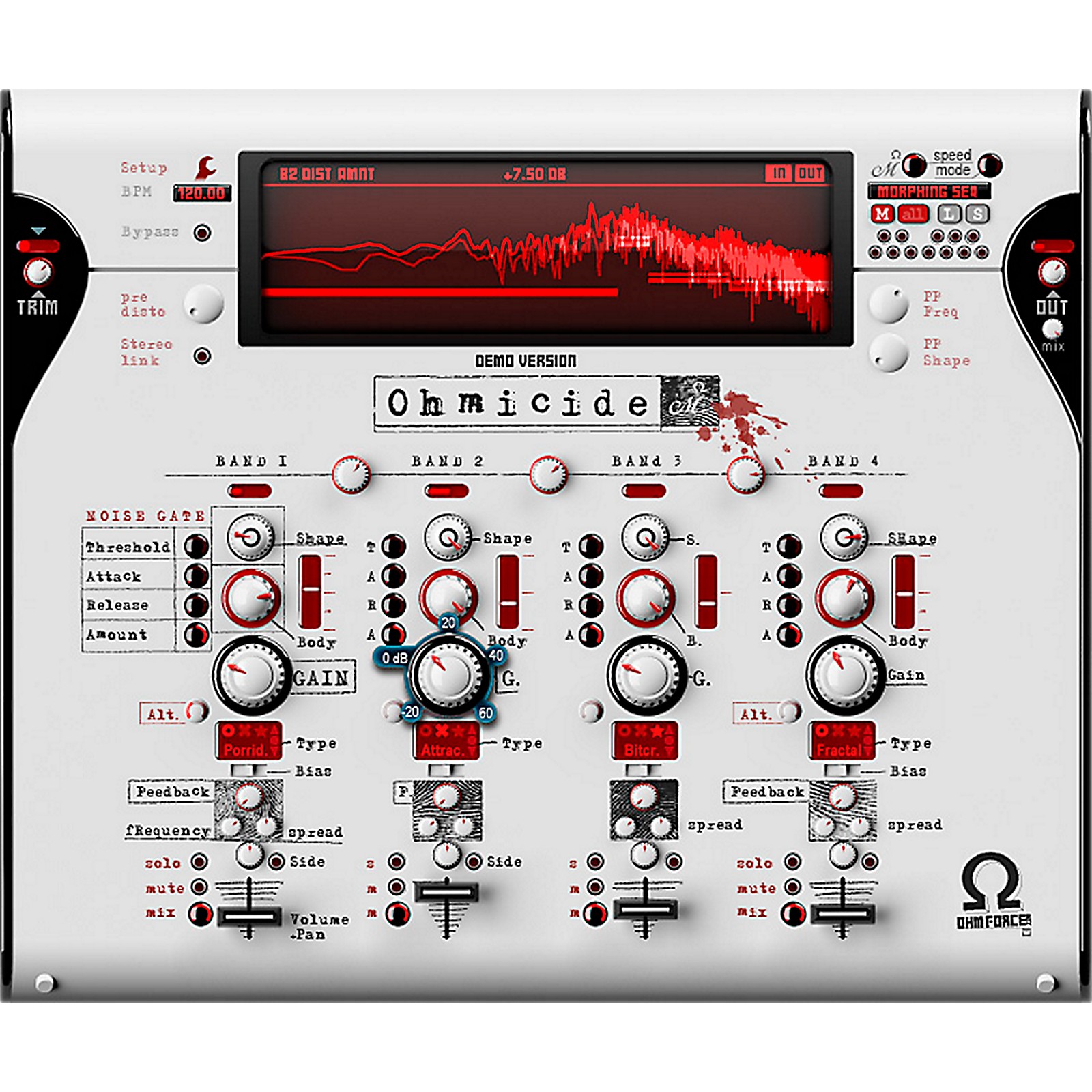 Ohmicide is a cross platform plug-in, with support for the VST, AU and RTAS formats. Though it is an effects processor, it takes advantage of Ohm For...Click To Read More About This Product

Ohmicide is a cross platform plug-in, with support for the VST, AU and RTAS formats. Though it is an effects processor, it takes advantage of Ohm Force's Melohman technology so you'll get the most out of it if you have a MIDI controller.

Ohmicide:Melohman's bone-white interface represents a bit of a departure from the usual over-the-top Ohm Force design, there are no claws, cats or space aliens to be seen. This time around, clarity is the modus operandi, though they have flexed their artistic side a little with the dried blood stains and typed logo. Considerate, don't you think?

Ohmicide is a multiband distortion processor, and the controls for each band are tucked away just below an informative waveform display. Global controls are dotted about the interface, and at first glance you might be surprised at the lack of marks surrounding the knobs. But not to worry, clicking one brings up an indicator that gives you an idea of that particular parameter's value. All in all, it's straightforward to get around and easy to understand.

While the above feature set would more than justify the price of Ohmicide, the Melohman features clinch the deal. For those not familiar with Ohm Force's Melohman technology, it allows you to set up various preset morphing behaviours for triggering via a MIDI keyboard. This allows for some interesting live interaction with the plug-in. You can, for instance, set Ohmicide up so that higher velocities cause the patch to change suddenly, while slower velocities trigger a more gradual morph.

In the past, Ohm Force have only applied this idea to synthesizers. Here, for the first time, they've added Melohman to an effects device, and to excellent effect. In addition, Ohmicide has MIDI learn functions that enable you to latch parameters to MIDI CCs, such as those transmitted by knobs or sliders on an external MIDI controller. Even preset selection can be assigned, which is useful for creating glitchy effects. We prefer MIDI learn that can be assigned via a simple right-click, but Ohmicide's menu-based method is fine.

Order today and get back on anyone who has ever picked on you in your life.