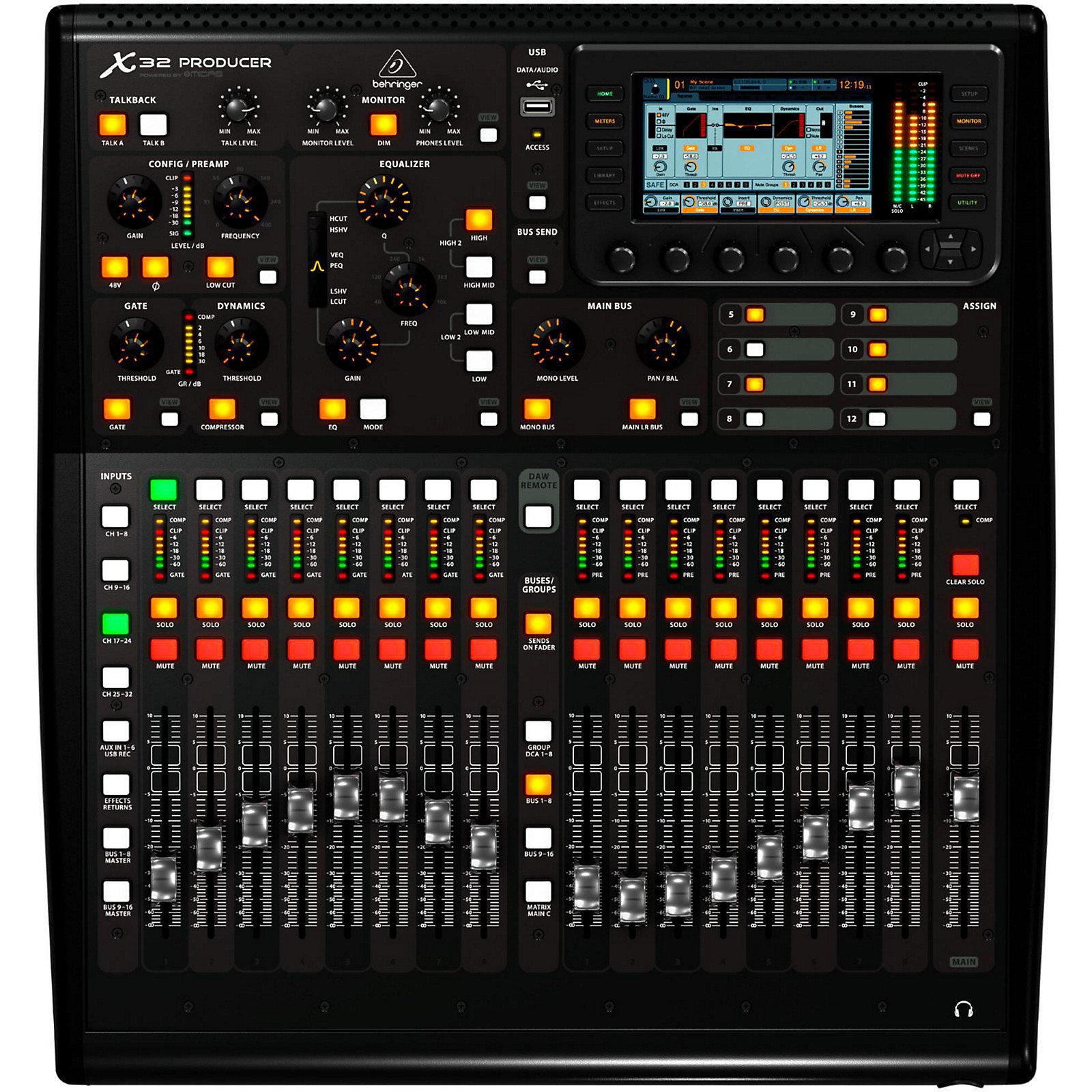 The BEHRINGER X32 Producer features a fluid workflow coupled with a fully interactive user interface that has immediate familiarity and instills quic...Click To Read More About This Product

The synergy between these three companies runs deep in the X32. From the MIDAS-designed mic preamps to KLARK TEKNIK's rock-solid, ultra-low latency SuperMAC networking technology and BEHRINGER's completely re-engineered processing algorithms, X32 Producer raises the bar on what a digital mixer can be. A singular passion for delivering advanced technology, unrivalled usability and true road-worthiness has enabled Behringer to engineer a digital console that is the ideal vehicle for your creative expression.

With the introduction of the new 2.0 firmware, Behringer has not only dramatically improved the workflow, but also added all-new capabilities including "Acoustic Integration" for total connectivity and control of your speaker and In-Ear Monitor (IEM) systems.

Then Behringer completely re-imagined the more than 50 onboard FX "Plug-Ins" and added classic processor examples based on "True Physical Modeling". Behringer also made the X32 even more flexible, with swappable expansion cards for connecting to other multi-channel audio networking via USB, ADAT, MADI and Dante protocols, in addition to the onboard ULTRANET and AES50 connectivity.

Above all, the X32 is designed to put the power of digital in your hands - without compromise.

Motorized Faders
X32 Producer serves the user a full complement of 25 long-throw, 100 mm motorized servo faders for primary mix control. Working in concert with the LCD Scribble Strips and TFT Display, the faders serve multiple functions while always keeping you informed. Separate fader sections for inputs and groups/buses allow for convenient assignments from inputs to groups/buses. With the ability to store up to 100 scenes, X32's motorized faders jump to life the moment a scene is recalled.

LCD Scribble Strips
X32 Producer's automated control surface is designed to present you with the control you need, when you need it. A total of 29 programmable LCD Scribble Strips offer channel/bus identification that mirrors what is being controlled. Use them to enter input/output tags, plus add icons you recognize at-a-glance. Then assign colors to create visual groups for immediate, on-the-fly recognition of similar inputs.

Channel Strip
The X32 Producer's Channel Strip puts the most important channel processing parameters into one section so that no matter which channel you are working on, the controls are always the same. This highly-efficient layout stems from BEHRINGER's decades of console design and input from their users. Optimized control illumination ensures a clear indication of levels or status from any viewing angle. Illuminated rotary encoders and switches give you control of preamp settings, frequency shelving, dual dynamics sections, as well as multi-mode fully parametric EQ, bus sends, main, mono and stereo panning.

7" Main Display
Its 7" day-viewable color TFT (Thin-Film Transistor) display shows the setting parameters you need when you need them. Selected for its high-contrast performance and outdoor visibility, TFT is ideal for concert and open air festival venues. Flanked by high-precision, context-sensitive tactile encoders, the screen comes to life and immediately reports in high definition all adjustments applied to a wide range of parameters. Intelligent design puts control of vital functions such as Effects, Metering, Routing and much more 1 or 2 button presses away.

Sends On Fader
The X32 Producer brings the convenience of digital mixing to your Aux and output bus mixes too, thanks to its integrated Sends on Fader feature. This incredible function allows you to build powerful, dedicated sub-mixes for monitor, secondary zone feeds, and much more-all without affecting the front of house mix or levels. The X32 Peoducer allows you to send your choice of signals to any Aux or output bus and then dial in the perfect mix via the channel faders. The console remembers where you set the faders and instantly recalls them when you select a bus for quick adjustments.

DCA Groups
DCA (Digitally Controlled Amplifier) groups allow control over several signals at once without actually mixing them into a subgroup bus. X32 Producer's 8 DCA groups let you control multiple signals via a single fader, such as the entire drum mix, the horn section, or the backup vocalists, etc.

DCA control affects the FOH mix, while allowing the individual buses to remain unchanged. The result is a customizable workflow that provides maximum flexibility, but still allows individual buses and subgroups to serve the purpose they were intended for, such as zone sends, broadcast feeds, etc.

View Function
Across the X32 Producer you'll find 11 strategically placed View buttons associated with various functions. These buttons enable immediate access to information about that specific function. For instance, if you press the View button in the Equalizer section, information for that channel's EQ is instantly shown on the main display, providing in-depth editing of all related parameters. This direct access to visual fine-tuning gives the engineer a level of control previously available only on consoles costing exponentially more.

Assign Section
While some digital consoles offer a few user-definable controls, X32 Producer's Assign section sets a new standard by providing a total of 36 fully customizable controls on three separate layers. As with channels and buses, individual Scribble Strips are provided for immediate identification. Buttons can be defined to toggle parameters on/off, adjust timing of effects by tapping, or jump to specific screen views. Rotary encoders with LED collars can be assigned to specific channel parameters, or to additional parameters in the Dynamics section relevant to the current channel selection.

100-Band RTA for all Channel/Bus EQs
The X32 Producer now includes a high-resolution 100-band Real Time Analyzer (RTA), with full Bar and Spectrograph views. This high-resolution RTA displays the audio energy distribution in 100 frequency bands over time - capturing a sonogram window of a full 10 seconds. Switch between the Large RTA view, displaying any available signal in full screen resolution, or the Combined view with the RTA view shown above each of the channel and bus EQ curves.

See the results of your filtering choices in the audio spectrum directly. Additionally, the RTA can be displayed on top of the 31-band graphic EQs in the FX rack. Monitoring and controlling frequencies has never been easier.

16 FX Plug-Ins Based on True Physical Modeling
With this revision of the X32, Behringer has added 16 new FX "Plug-Ins" to the X32, giving you access to a total of 50+ effects that would otherwise cost tens of thousands of dollars in hardware.

This new generation of high-end FX "Plug-Ins" is based on True Physical Modeling of classic audio hardware. Behringer essentially "rebuilt" classic analog gear in the digital domain and included models of legendary processors such as Urei's 1176*, Teletronix LA-2A* and Fairchild 670* compressors as well as the legendary Pultec* EQP-1a and EQ5 equalizers etc. Behringer also added a cutting-edge 5-band multiband compressor.

Last but not least, the X32 Producer can now run 4 studio-quality stereo reverbs together with 8 channels of 31-band graphic EQ. This allows you to replace your old outboard gear with a fully recallable onboard solution.

For example, now you can use the outputs from an X32 RACK for directly routing back PA or monitoring signals from a main or FOH console. New output tap points can be set as pre- or post-mute for greater usability with your P16 personal monitoring mixers. This is very useful in situations where you don't want mute groups to interrupt your signal flow.

Bring the convenience and clarity of digital mixing into your projects.