Join For Free
Share your location Order within 7 hrs 48 mins. 12 secs.
In Stock & Ready to Ship Orders placed before 3 p.m. ET usually ship the same business day (except weekends and holidays).
Ship to
Please enter 5 digits
Free Shipping Shipping and Delivery Times If we promise a delivery date and a delivery attempt is not made by this date, we will provide a refund of any shipping fees associated with your order. Questions? Call 800-449-9128
site1skuJ52076000000000 true MFI=0 true Change Location 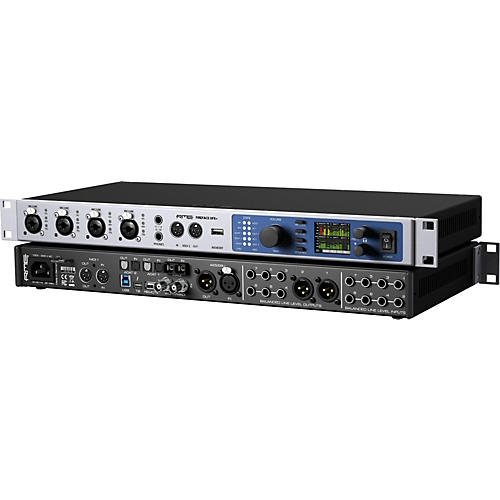 The Fireface UFX+ becomes the center of any multitrack studio because it is able to handle up to 94 channels I/O with ease. With unprecedented flexibility, compatibility, the inclusion of DURec (Direct USB Recording) and RME’s famous low latency hardware and driver designs, the Fireface UFX+ raises the bar to new heights. Packed with features not found on its older sibling, including MADI I/O (188 channels of I/O, 128 channels more than the Fireface UFX), a more powerful DSP, USB 3.0, Thunderbolt™ technology, and a new optional remote control firmly places the RME Fireface UFX+ as the new reference in multitrack recording, mixing and monitoring.

Comprehensive MADI Connectivity
The Fireface UFX+ opens the doors to a host of RME and 3rd party digital and analog I/O solutions. Expanding your analog channel count, the ability to route/mix within the digital domain through numerous sources presents many flexible options. Multiple external MADI devices can also be connected in series. To further enhance MADI flexibility, the Fireface UFX+ boasts some typical RME-style features. For example in USB 2 mode, which is limited to 30 channels I/O (12 analog plus 16 ADAT plus AES), the MADI I/O is still available via RME’s integrated hardware mixer TotalMix FX. Word Clock I/O (BNC) can be switched to MADI I/O (coaxial), and a special split mode even supports the use of both MADI I/Os simultaneously, with 32 channel each on optical and coaxial.

ARC USB Remote Control
The ARC USB connects to your computer via USB, and talks to TotalMix FX directly. It has 15 freely assignable and illuminated buttons, one encoder wheel, and a TS jack to connect a foot switch. The ARC USB is a USB 1.1 MIDI remote control for the Fireface UFX+. Thanks to operating as a UAC 1 class device, it is natively compatible to Windows and Mac OS X. As soon as it is present in the operating system, TotaIMix FX will automatically detect the ARC USB, and communicate with it via simple MIDI remote commands to control the UFX+.

TotalMix FX
Since 2001, TotalMix has added unlimited routing and mixing to RME audio interfaces. Its unique capability to create as many independent submixes as output channels available, turned it into the most flexible and powerful mixer of its kind. With supported hardware, TotalMix FX includes a complete effects system, which not only adds flexibility to the recording chain, but also makes latency saddled software solutions obsolete. TotalMix FX can completely replace an external mixer, enabling the creation of multiple latency-free monitor mixes with EQ, Dynamics, Reverb and Delay for any outputs, incl. main monitors and headphone mixes for musicians.