Join For Free
Share your location Order within 7 hrs 48 mins. 12 secs.
In Stock & Ready to Ship Orders placed before 3 p.m. ET usually ship the same business day (except weekends and holidays).
Ship to
Please enter 5 digits
Free Shipping Shipping and Delivery Times If we promise a delivery date and a delivery attempt is not made by this date, we will provide a refund of any shipping fees associated with your order. Questions? Call 800-449-9128
site1skuL50862000000000 true MFI=6 true Change Location 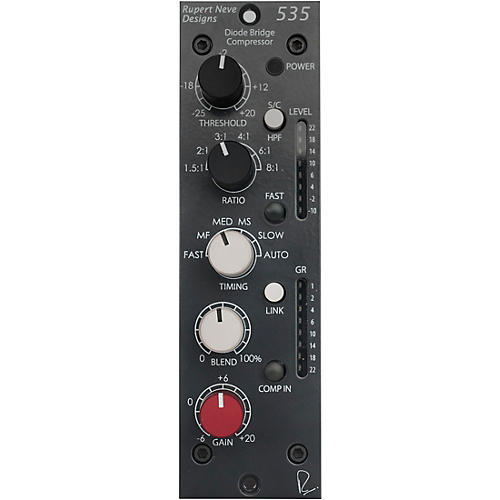 Neve processing in a 500 form factor.

The Diode Bridge
Where the VCA compressor found in the 543 and Master Buss Processor provides unmatched clarity, the weighty, harmonically rich tonality of diode bridge compression can be essential in pushing key sources like vocals, electric guitars, bass and drums to the forefront of a mix. Mr. Rupert Neve’s original diode bridge compressors like the 2254 served as an inspiration for the design of the 535. By understanding the limitations of the original 2254 topology, painstaking effort was taken to reproduce the unique tone of the 2254 while improving the noise floor, expanding inflexible time constants, adding full wave sidechain detection for improved dynamic response, widening the range of threshold and ratio controls, and raising the headroom of the diode bridge itself. Delivering the powerful sound of these classic designs with enhanced flexibility for the modern age, the 535 is a dynamic tool equipped to make a statement on virtually any track.